Vancouver       Meeting with union officials, politicians, and community leaders here, there seemed to be a whispered response when I would ask about the impact of the recession in Canada.   No one was willing to guarantee that it was not coming, but the low tones were indicative of the fact that the recession was not here yet, and they were hoping against hope that it might not come or be a simple hiccup in the night.  The housing market was robust in the Vancouver area still and though the Canadian dollar was slightly weaker against the US dollar than in the summer, generally that is felt to be a good thing here in the north.

Reading the Times on-line though was a different experience.  I felt like I was caught in an evil time warp.  There was Mike Gross, the former managing director of “loan administration” of Countrywide, sitting in the middle of the picture in front of Congressman Barney Frank and his committee who were trying to figure out how they could actually make loan modifications work for embattled homeowners.  Having sat across from Mike more times than I want to recall a year ago, it was shockingly deja vu to read that he was still reading from the same script he had tried to hold a year ago, and had been forced to abandon, but now with a new title at Bank America, he was trying again:

At the hearing, panelists disagreed on whether modification was allowed with bundles of mortgages that had been resold. An executive from Bank of America said that the contracts behind some securitizations expressly prohibited changes to the underlying mortgages. The executive, Michael Gross, the bank’s managing director of loan administration loss mitigation, said that banks had more flexibility to modify terms in loans they held.
Clearly Mike had decided that come hell or high water, he was going to stick with his story and hold on for dear life.  And, his story was going to be “blame the other guy.”  Any guy!  Just don’t hold me and my institution responsible for really fixing stuff.
In the hearing, amazingly the head of the Securitization Forum, the big hitter for the industry had clearly decided that he and his buddies were not going to be the goat, so he was ready to argue, that Gross and his wannabes needed to man-up and do some modifications and stop worrying about the possible lawsuits.  Quite right, Mr. Deutsch!
But an executive with the American Securitization Forum, an industry group, said that contracts did allow bundled mortgages to be modified. The forum is in discussions with a range of investors who bought mortgage bonds to streamline the process of such modification, said Thomas Deutsch, deputy executive director of the group.
“Servicers do have the legal authority, right and responsibility to modify loans in appropriate circumstances, even if those loans are in mortgage-backed security pools,” Mr. Deutsch said.
This is a shell game that Mike and risk mitigation folks at a number of institutions have tried to argue for too long.  Even the Times editorial people called it right for a change by saying that Citi and others that had made new announcements on loan mods (Citi’s announcement had said they were “temporarily” reducing loan balances, which makes you wonder what that could possibly mean?!?) that were just not going to be enough once again.

Congressman Frank who has undoubtedly heard these sorry stories more often even than I did when I sat across the table from one set of suits after another, knows that eventually he and others are going to have to say enough is enough. 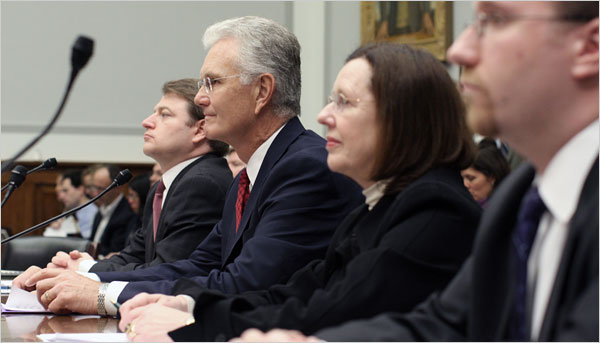