Brookings, Cuba, Drugs, and Immigration
November 25, 2008
New Orleans               Sometimes I find surprises in very unlikely places and in this case it was in a recently released Brookings Institute report called, “Rethinking U.S.-Latin American Relationships:  A Hemispheric Partnership for a Troubled World.”  The report was as mainline as I could imagine and produced by the Partnership for the Americas Commission co-chaired by a former president of Mexico, Erne3sto Zedillo, and former deputy Secretary of State, Thomas Pickering, and a host of other notables from Latin American and Caribbean countries.  Such a report would usually be a yawner, but in this case they seem to have taken their charge to “rethink” some of these issues seriously.
The headline grabber was their recommendation to totally unthaw and normalize all relationships with Cuba.  They not only argued that the US needed to throw open the doors to travel and other relationships, but also that Cuba should be dropped from the terrorist “watch” list and allowed to be a full participant in the community of nations in the Americas.  Viva!  This is a change one can feel coming.
On drugs they also argued that rather than targeting a couple of countries like Mexico and Columbia on the supply side, perhaps it was more important to deal with the demand side for the drugs in the US.  This would be a sea change.
Reading the recommendations from this council of wizened elders, I was fascinated to see how they lined up solidly on immigration with the best thinking in the US.  There recommendations on “migration” were to the point:
■■ Establish groups at the working and ministerial levels to
discuss migration issues regularly with key migrant-sending
countries, including Mexico and El Salvador.
■■ Establish a three-part visa system made up of temporary,
provisional, and permanent visas to encourage circular
migration patterns.
■■ Establish a Standing Commission on Immigration and Labor
Markets to recommend annual visa quotas on the basis of
U.S. labor market needs.
■■ Provide U.S. law enforcement agencies and employers with
the necessary tools to enforce workplace verification laws.
■■ Expand investments in technology that enhance border
efficiency and security, along both the United States–Mexico
and United States–Canada borders.
■■ Provide a path to legal status in the United States for illegal
immigrants without a criminal record.
■■ Enhance joint efforts to protect the human rights of
migrants.
■■ Facilitate the inexpensive transfer of remittances.
The 3rd recommendation around a “standing commission” on annual visa quotas is remarkably close to a program being advanced in this area by former Secretary of Labor and current University of Texas professor Ray Marshall in a study he did for the Economic Policy Institute.    The 4th recommendation arguing for “tools” to enforce workplace verification is a de facto rejection of workplace raids, which simply must be stopped.  The 5th recommendation touches on enforcement but in arguing for technology clearly rejects the notion of a border wall.  The 6th recommendation in providing a “path” to legal status is critical and at the core of all immigrant reform efforts.  Protect human rights which should be a no brainer and make remittances inexpensive, and this all adds up to an interesting, if controversial, stack of recommendations.
When the grey beards start arguing it is time for a reassessment and new thinking, hopefully it helps the legion of folks marching into the White House arguing for change, to actually deliver some of that for a change. 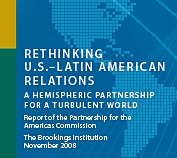 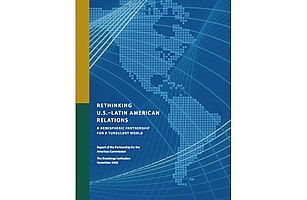