Allen Ginsburg at KNON Radio
November 27, 2008
New Orleans     This is a treat that I stumbled into recently from the Dallas Observer.  A blogger working as a volunteer midnight DJ on KNON, the great Dallas non-commercial radio station that many of us helped organize, get on air, and continue to love, tells about Allen Ginsburg reading ON THE AIR!

Fri Nov 21, 2008 at 12:00:26 PM
Driving through East Dallas the other day I had the odd impulse to swing by the old KNON studio. Kind of depressing to see an empty lot taking up that space now.
The studio was formerly located upstairs in a wooden 50’s-era two-story house at the corner of Carroll Ave. and San Jacinto Street. The Dallas chapter of ACORN inhabited the downstairs portion of the building. Bearded hippies wearing panchos and sandals had keys to the place. Climbing up the patchwork stairs was like ascending to a teenager’s secret tree house.

The house on San Jacinto was kinda like a freak Alamo; the last stand for the ghetto underground in Dallas.

It was a rough neighborhood back then. Warring territorial drug gangs pulled brazen drive-by shootings in broad daylight. Hookers did biz in the driveway and Jamaican pimps rolled blunts on the hoods of the cars in the back yard. Vatos and Rastas ruled the roost; I was but a mere suburban visitor on a weekly three-hour pass.

My radio show came on in the middle of the night, so I was literally taking my life into my own hands every time I carried my records back and forth to the car.

"Life Is Hard" was just that–the sound of bad people doing terrible things. Whether it was Slayer, Eazy E, Peter Tosh or the Butthole Surfers, the show could have just as easily been called "High Anxiety". My rabid fan base was well into the dozens.

Most nights, I was pretty much on my own; that meant I was the only one in the building. Most of the time I would have the monitors cranked up so loud in the control booth I couldn’t hear what was going on downstairs. No central heating or air at this house, either; just an old window unit upstairs and a tiny space heater under the console.

That night the air conditioner went out and it was just burning up in the booth. I pulled the broken unit out so there would at least be some air coming through the lone window that looked out over San Jacinto Street. You could hear the cars driving by in the background as I back-announced song titles and band names.

The request line buzzed and I picked up. A female voice on the other end inquired if she could bring “Mr. Ginsberg” up to the station to “go through his books”. For some reason or another, I got the impression she was talking about KNON’s accountant.

As a culturally retarded 23 year old, I had had never heard of the legendary ’60s Beat poet Allen Ginsberg.

That woman on the other end of the line was longtime Dallas poet, author and frequent WordSpace Dallas performer Karen X. Minzer.

I’ll let her explain how we all hooked up.

“Allen was in town for the SMU Literary Festival,” Karen recalls. “And someone asked us–I can’t remember if it was a student, professor or punk devotee of his, if Allen would be willing to read on our community radio station… and then suggested Jeff Liles’ program. Allen never turned away a gig that represented a ‘happening’, and they said KNON was the real voice of the people, so I convinced Allen it would be cool.”

Improvisation was an everyday thing at KNON back in the day. Bringin’ it by wingin’ it. This night was certainly no exception.

Ginsberg was also here recording selections from his album The Lion For Real for Island Records during that week. After the SMU performance was over, it was time for their entourage to head for the ghetto radio station.

More key backstory from Karen X: “His reading at SMU that night was magnificent and moving. Allen, Michael Minzer and I had also been generously wined and dined by the inner circle of the academics there. So we then drove over to the KNON studio, tired and still dressed from some ‘professor party’ (those professors can be pretty wild!), and we knocked and knocked until somebody finally came to the door. Jeff didn’t seem very appreciative that we had even gone to the trouble to be there.”

As the Lit pack piled through the front door, Karen glared at me and then set the tone for the next few minutes.

“How could you just leave us standing out there for so long?” she said impatiently.

Of course, she had a point; they looked rich and important, and it was the middle of the night in the heart of the ‘hood. In my macho-oblivious bliss I had no idea that they were even outside trying to get in. It could have turned out bad. I had the Beastie Boys’ first album cranked up so loud in the control room that I didn’t even hear them knockin’.

I apologized and headed back upstairs to pick a new record.

I figured they were heading into the office to go sort through some bills and paperwork. When they came into the control room and started getting comfortable, I started to wonder what in the world was up. Why was this woman staring at me? What was that old guy doing with all of those notebooks in his backpack?

“Can I get you anything?” I asked Karen. "Do you need me to let you into the office?"

She wasn’t tryin’ to hear all that. Apparently she and I had some unfinished business that I wasn’t aware of.

“I knew Jeff’s name from Theatre Gallery, where I’d been beaten up while performing on stage a few weeks prior to that,” Minzer remembers. “And I thought, ‘Oh, maybe he’ll apologize. But maybe he didn’t know. People getting beaten at rowdy punk scenes isn’t exactly Breaking News; except that it was me, baby.”

It was impossible to keep track of everything that happened at Theatre Gallery in those days. Her performance art had apparently inspired some sort of unpleasant audience reaction.

“Those were the days of my contact-improvisational spoken word and movement pieces (translated: obnoxious and confrontational presentation). Problem was, when I went back on stage that night, the band that had performed before me began beating me up. It was a pretty humiliating experience.”

I had no idea what she was even talking about that night; I was just trying to pick records and do my DJ thing.

“Are you ever going to let him read?” she asked impatiently.

She nodded towards the old guy in the corner going through all of the notebooks.

Me: “He is reading. He doesn’t need my permission to do that.”

What was she talking about? Why would our accountant read our "accounts payable" over the air during my radio show?

From the Minzer account: “Liles, the blonde dreadlocked DJ on duty, wasn’t open to discussing it when I brought it up, nor did he even acknowledge Allen! I began to get a little impatient waiting for Allen to finally go on the air. We were actually supposed to be somewhere else official and this fool DJ at KNON was making us wait and totally completely ignoring us the whole time.”

Chalk it up to blissful ignorance and a head full of boo.

Karen pulled me aside and let me have it: “Jeffrey, this is Allen Ginsberg, the WORLD FAMOUS POET. He is here to read some of his work on the radio. Would you please be so kind as to let him bless your show with his work?”

Ginsberg sat down directly across from me and pulled up the other microphone. I had no idea what he was going to do or say. He got about 10 seconds into his first piece when he was interrupted by an unmistakable sound in the background.

The sound of East Dallas Gangsters playing “Gunsmoke” was indelibly audible through the open window of the control room.

When the shooting finally subsided, there was about a three second pause, and then Ginsberg said, “Shall I continue?”

Allen continued his piece, read a couple of other shorter poems, and then called it a night. On his way out the door, he reached out to embrace me. I didn’t really expect that sort of thing after what we had just been through.

“On the way out of the studio that night, I was holding Allen’s hand, when he leaned over to kiss Jeff in the traditional ‘Beat Poet’ inner-circle acknowledgment,” Karen says. “Jeff recoiled and sort of pushed him away, his body language was very obvious. I was just like, so insulted, I can’t even tell you how I had to restrain myself.”

Karen X hated me for years after that night.

“I mean fuck this homophobic, full-of-himself, unappreciative, you-gotta-be kidding-me disrespectful asshole,” writes Minzer. “And that’s how I felt for a long time. I was mad about it for so long that years later, at Roxy and Judy Gordon’s house one night, I threw a jar that I was drinking out of at him!”

No one disputes that I probably deserved it. Over the years Karen and I eventually buried the hatchet and became friends. Thankfully, we can all laugh about this now.

Fast forward to a decade later: It was June of 1996 and it was hot as fuck in New York City.

Cottonmouth, Texas was booked as the opening act for Tripping Daisy and The Figgs at Brownie’s on the Lower East Side. TD drummer Mitch Marine and I had made plans to go grab something to eat at an Indian restaurant on St. Marks Place before the show.

As fate would have it, I was a writer and spoken word performer myself at this point now, and these shows were my first weekend gigs in Manhattan. Of course, by this time, I was fully aware of Allen Ginsberg and his enormous contribution to the American literary landscape. One can only remain an oblivious idiot for so long.

As I sat on the front stoop of Brownie’s and waited for Tripping Daisy to finish their sound check that night, I saw a familiar figure coming towards me on the sidewalk. It was Allen, flanked by his longtime male companion on one side, and a younger female assistant on the other.

They stepped closer and closer in my direction. Somehow I screwed up the courage to stand up and ask Mr. Ginsberg if he still remembered his bizarre visit to my radio show in Dallas.

With maybe three seconds hesitation, he looked into my eyes, put his arms around my neck, then said, “Oh, of course you beautiful boy. You never forget the first time someone opens fire with an automatic weapon during one of your poems.” 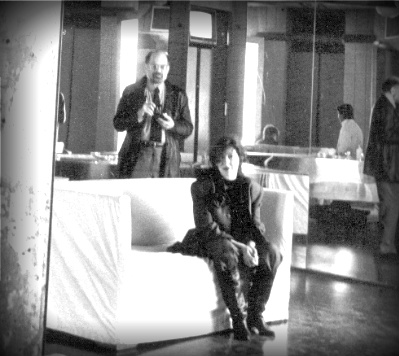 Allen Ginsberg and Karen X. Minzer at the Starck Club in Dallas in 1986