Neighborhood Housing and Fear in Sicily
December 12, 2008
New Orleans    Our old friend, Professor Ken Reardon, who had done so much with us in making a plan for rebuilding the 9th Ward in New Orleans with his students and faculty at Cornell, that it was good news that he was visiting again with another crew of students now that he is right up the river at the University of Memphis.  It turned out to be a fascinating couple of hours, largely learning about Catania, the 2nd largest city in Sicily, at the base of Mount Aetna.
Three of Ken’s delegation involved in local and regional planning worked in various capacities for the City of Catania.  It didn’t take long going around the room before one of the folks, who identified herself as a “young professor,” which turned out to be an adjunct position, asked the question so that there was no way that I could miss it.  “What would you suggest that community organizing methods could do in a situation where neighborhood residents have been waiting for housing and dangerous crime elements take over the housing?”  There was more to the question, but I got the message.
Reardon helpfully supplied the background.  In an area being renewed a world renowned architect (from Japan, I believe he said) designed amazingly constructed and affordable housing.  There was a long waiting list of thousands in line for the units as they were built.  The “crime element” well known in Sicily managed in fraudulent means to “squat” thousands of families into the housing units.  Many of them had now been there for years.  I thought he said 30 years.
The city, thanks to the enthusiasm of this new, young staff is trying to figure out how to do something about all of this, and in a number of different ways as we talked became more and more interested in the fact that community organizing along the model we employed at ACORN International, might be just the thing to get residents organized. As we talked they became to believe that over time there was a solid base ready to resolve this housing dilemma that had been intractable for years.
Next thing you know we were talking about ACORN International training organizers from Italy in New Orleans and over in Sicily, taking pictures, and making plans to get serious, visit, and see what might be possible next July.
The great thing about door knocking is that you never know what you might find on the other side of the door once the knock is answered and the door opens wide.
It was good to see an old comrade walk in with new challenges and opportunities. 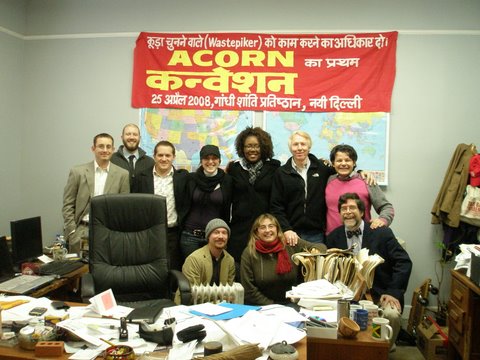 Students from University of Memphis and Catano, Sicily with Reardon and Rathke