Antigua  Since we’re talking about tactics, this thing in the Iraq with Bush is out of hand.  I guess I meant out-of-foot, but anyway….We have to say that trying to physically attack the President of the United States is certainly the wrong thing to do.  Having seen the rewind, Bush did an excellent job of ducking the shoes and to my reckoning seemed to have a look of bemusement on his face the whole time, so he certainly didn’t seem to be responding as if in danger.
But as a wild tactic in the Middle Eastern context where the sole of the shoe, much less the throwing the shoe, is a huge insult, this guy seemed to have chosen a tactic that made him an instant hero.  I’ve read reports that various individuals and countries offered to take care of his family while he was in jail.  Someone offered him a million dollars.  He may have missed the mark, but he hit a nerve.
But, never let it be said in the modern world that folks will miss a chance to make a buck, whether through the ubiquitous Obama t-shirts now or it seems, the Bush shoe.  Here’s a piece from the Times:

‘Bush Shoe’ Gives Firm a Footing in the Market

ISTANBUL — When a pair of black leather oxfords hurled at President Bush in Baghdad produced a gasp heard around the world, a Turkish cobbler had a different reaction: They were his shoes.
“We have been producing that specific style, which I personally designed, for 10 years, so I couldn’t have missed it, no way,” said Ramazan Baydan, a shoemaker in Istanbul. “As a shoemaker, you understand.”
Although his assertion has been impossible to verify — cobblers from Lebanon, China and Iraq have also staked claims to what is quickly becoming some of the most famous footwear in the world — orders for Mr. Baydan’s shoes, formerly known as Ducati Model 271 and since renamed “The Bush Shoe,” have poured in from around the world.
A new run of 15,000 pairs, destined for Iraq, went into production on Thursday, he said. A British distributor has asked to become the Baydan Shoe Company’s European sales representative, with a first order of 95,000 pairs, and an American company has placed an order for 18,000 pairs. Four distributors are competing to represent the company in Iraq, where Baydan sold 19,000 pairs of this model for about $40 each last year.
Five thousand posters advertising the shoes, on their way to the Middle East and Turkey, proclaim “Goodbye Bush, Welcome Democracy” in Turkish, English and Arabic.
For now, Mr. Baydan’s customers will have to take his word for it. The journalist who launched the shoes at a news conference a week ago, Muntader al-Zaidi, 29, was wrestled to the ground by guards and has not been seen in public since. Explosives tests by investigators destroyed the offending footwear.
But Mr. Baydan insists he recognizes his shoes. Given their light weight, just under 11 ounces each, and clunky design, he said he was amazed by their aerodynamics. Both shoes rocketed squarely at Mr. Bush’s head and missed only because of deft ducks by the president.
Throwing a shoe at someone is a gross insult in Arab countries, and Mr. Bush is widely unpopular in much of the region. But as he enters his last weeks in office, he seems to have gained a small foothold of appreciation here.
Noting the spike in sales, Serkan Turk, Baydan’s general manager, said, “Mr. Bush served some good purpose to the economy before he left.” 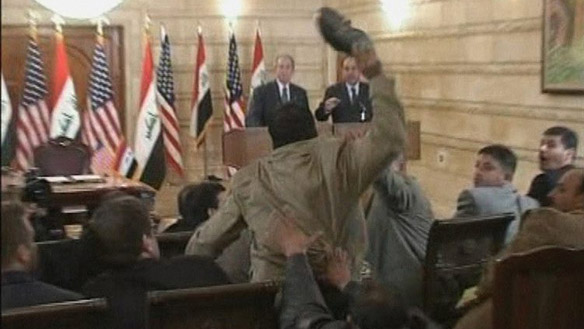