Blaming the Victims
December 23, 2008
Antigua   In the middle of gazillion dollar bailouts and bonuses for banks and newbies that became banks to get bailouts, there is an unreality to the hate patrol trashing autoworkers compared to the tut-tutting that accompanies the payment of Wall Street bonuses in millions for a job not done.  Jon Stewart had it right a couple of weeks ago when he did a rant about autoworkers not getting a bailout, when a least we got a car from them.  In Wall Street all anyone can show now is less than they had and in some cases it now turns out that they were allowing good people to be robbed blind.  Four words that are going to have to leave the lower Manhattan landscape are:  risk management and due diligence.
Bob Herbert has it right in a column today where he stands up for teachers and autoworkers with a great big wet kiss and a “this Bud’s for you!”

A Race to the Bottom

Toward the end of an important speech in Washington last month, the president of the American Federation of Teachers, Randi Weingarten, said to her audience:

Ms. Weingarten was raising a cry against the demonizing of teachers and the widespread, uninformed tendency to cast wholesale blame on teachers for the myriad problems with American public schools. It reminded me of the way autoworkers have been vilified and blamed by so many for the problems plaguing the Big Three automakers.

It’s time we refocused our lens on American workers and tried to see them in a fairer, more appreciative light.

Working men and women are not getting the credit they deserve for the jobs they do without squawking every day, for the hardships they are enduring in this downturn and for the collective effort they are willing to make to get through the worst economic crisis in the U.S. in decades.

In testimony before the U.S. Senate this month, the president of the United Auto Workers, Ron Gettelfinger, listed some of the sacrifices his members have already made to try and keep the American auto industry viable.

Last year, before the economy went into free fall and before any talk of a government rescue, the autoworkers agreed to a 50 percent cut in wages for new workers at the Big Three, reducing starting pay to a little more than $14 an hour.

That is a development that the society should mourn. The U.A.W. had traditionally been a union through which workers could march into the middle class. Now the march is in the other direction.

Mr. Gettelfinger noted that his members “have not received any base wage increase since 2005 at G.M. and Ford, and since 2006 at Chrysler.”

Some 150,000 jobs at General Motors, Ford and Chrysler have vanished outright through downsizing over the past five years. And like the members of Ms. Weingarten’s union (and other workers across the country, whether unionized or not), the autoworkers are prepared to make further sacrifices as required, as long as they are reasonably fair and part of a shared effort with other sectors of the society.

We need some perspective here. It is becoming an article of faith in the discussions over an auto industry rescue, that unionized autoworkers should be taken off of their high horses and shoved into a deal in which they would not make significantly more in wages and benefits than comparable workers at Japanese carmakers like Toyota.

That’s fine if it’s agreed to by the autoworkers themselves in the context of an industry bailout at a time when the country is in the midst of a financial emergency. But it stinks to high heaven as something we should be aspiring to.

The economic downturn, however severe, should not be used as an excuse to send American workers on a race to the bottom, where previously middle-class occupations take a sweatshop’s approach to pay and benefits.

The U.A.W. has been criticized because its retired workers have had generous pensions and health coverage. There’s a horror! I suppose it would have been better if, after 30 or 35 years on the assembly line, those retirees had been considerate enough to die prematurely in poverty, unable to pay for the medical services that could have saved them.

Randi Weingarten and Ron Gettelfinger know the country is going through a terrible period. Their workers, like most Americans, are already getting clobbered and worse is to come.

But there is no downturn so treacherous that it is worth sacrificing the long-term interests — or, equally important — the dignity of their members. 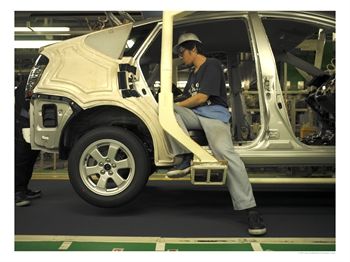