Why Screw Workers?
New Orleans               In the middle of this pronounced and historic recession I cannot help myself from monitoring some of the discordant voices out there about workers and wages these days, as business and government tries to find a place to land.

For example, in Lee Scott’s parting shot as CEO and grand puba of Wal-Mart, the other day in speaking to the National Retailers’ Federation meeting in New York City, said the following:

Scott asked in his speech why people did nothing about health care reform, a new energy policy, education reform or immigration reform when the stock market was robust and the nation was not at war in the Middle East.

"From what I have learned in business … and from what I have seen in Washington … the hard questions rarely get asked during the good times," Scott said.

"They are just too easy to ignore, too easy to avoid, too easy to put off when things are going well. Unfortunately … it often takes a crisis or a period of great difficulty to face challenges and … most importantly … to change," he said.

Wal-Mart in 2005 paid $11 million to settle allegations the company knowingly had hundreds of illegal immigrants cleaning its stores, some working seven days a week and locked inside the stores overnight.

Wal-Mart on Dec. 23 also announced it was settling 63 of 73 pending class action wage and hour lawsuits, filed nationwide alleging employees were forced to work off the clock and not paid overtime.

American people are tired of partisanship and gamesmanship in Washington, D.C., Scott said, so government leaders need to work together with businesses.

"This can work. We have seen it work at Wal-Mart," Scott said. He cited Wal-Mart "becoming a more sustainable company," when some of the best came from non-government organizations and former critics.

"Let me be clear about this point … there is no conflict between delivering value to shareholders and helping solve bigger societal problems," he said.

Listen to that, Wal-Mart is now a social change organization!  Pinch me, we’re not in Kansas anymore.

In another note in Australia they advertised for a $100,000 a year job being the groundskeeper on an island around the Great Barrier Reefs.  Within 24 hours more than 10,000 people applied.  Now, that’s the way to pitch a job.

On the other hand, Governor Bobbie Jindal of Louisiana, one of the bright lights and future hopes of the Republican Party, had his administration announce that the raises he had earlier promised for 4000 state workers who were paid just above minimum wage were likely now not going to happen.  He must not have gotten the memo that this is not the time to be going out of your way to screw workers.

If Lee Scott can learn a new rap, why not everyone? 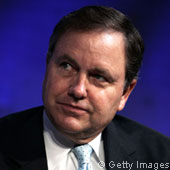