Living Wages in Japan
New Orleans               We had a very interesting visit with labor researchers and professors from Japan about the prospects for a living wage movement in their country and the lessons we had learned, particularly in New Orleans from the joint labor and community campaigns here.  In the complicated translations it seems that each state or prefecture sets a minimum wage standard, the lowest ranging from about a $7 USD per hour equivalent to almost $8.00 USD in the Tokyo area.  Given the high cost of living in Japan, particularly Tokyo, and using the US federal minimum wage which is now $6.55 per hour and will be $7.25 this coming July 2009, it is easy to understand our friends interest.

Ken Kitazawa from the Japan Institute for Labour Policy and Training, Professor Rimpei Yoshimura from Fukui Prefectural University, and Yoshitake Obata from the Jichiro-Rengo (the All-Japan Prefectural and Municipal Workers Union) accompanied by Yumi Mano, a local New Orleans blues singer and interpreter originally from Kobe, Japan met with leaders and organizers from Local 100 SEIU, New Orleans ACORN, and ACORN International about campaigns here and around the world.

It will take many more conversations to understand fully how living wages might be created in Japan but the process seems to involve changing legislation dramatically at the state and municipal level throughout the country.  The current economic crises has increased unemployment in Japan to over 4%, but clearly when the United States rate is pushing 8% now, it seems like they have a way to go.  Unions in the public sector like Jichiro-Rengo are facing constant outsourcing and privatization now as well as casualization of the labor market where workers are laidoff, rehired on contract, and then subjected to continuing contract rollovers that prevent them from regaining permanent status and benefits.  Many of these same anti-worker measures unfortunately were pioneered in our country.

Rosa Hines and I spent a lot of time discussing Local 100’s work in raising wages of privatized sanitation laborers in New Orleans and Dallas.  This was fascinating to our friends, since they have not seen much outsourcing in sanitation in Japan yet.

When asked about the current status of the living wage movement in the states, as the answers went around the room, the Louisiana ACORN leaders made the excellent points that there were two reasons that there seemed to be less activity on this front in the USA right now.  One was the fact that the recent increase and step up of the federal minimum wage had taken a lot of the urgency out of the issue for many groups and even for some lower wage workers.  The other is of course the declining economy that has put workers in desperate straits but also pushed everyone to hang on to what they have rather than rocking the boats.

It would be nice to see Japan join the living wage movement around the world! 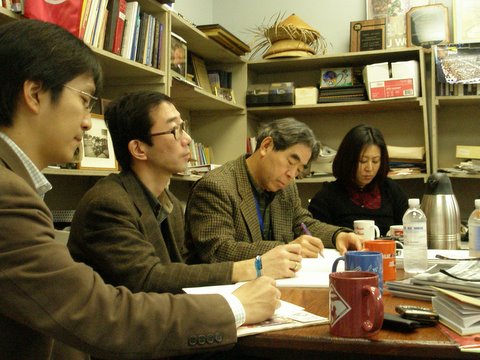