Reform Not Raids!
Washington                 The warm glow of hope and promise had its day and in the dawn we woke to the freezing cold of reality as about five hundred immigrants, journaleros or day laborers, and others assembled at a park in L’Enfant Plaza for a procession to ICE, the old INS to demand an end to the raids and to hope our voices and messages would remind the new President Obama of his promise to move quickly on immigration reform.  These actions were assembled by the FAIR immigration coalition, which is supported by the Center for Community Change, and the DC Area Immigration Coalition, headed by Gustavo Torres of Casa de Maryland.

Kim Propeack (CASAdMd) and Marissa Graciosa (CCC) were the chief organizers of the march and rally and did an excellent job pulling all of the loose ends together.  Buses and delegations had come from Maryland, Virginia, New York, Florida, Illinois, California, and many points in between were also enthusiastically represented.

This was a dignified and spirited crew, united strongly in responding to the demand of their grassroots base among immigrant communities and workers who are desperate to hear whether or not the President and his people are going to deliver to the Latino base providing no small measure of the margin of victory with a the promised real and immediate program of immigration reform.  The procession and the speakers, many at the rally at ICE from diverse segments of the religious community, were on message not trying to put Obama’s feet to the fire, but trying to put the past behind them and look to the promise of the future.  An executive order to suspend the raids while the legal issues are addressed and researched would not be a heavy lift for the new President given the mess that has been caused in Iowa and Mississippi particularly, but there has been no word yet.  Surprisingly, one hears that some friends of the movement tried to dissuade organizers from even this dignified manifestation from their base.

Perhaps this crowd assembling to raise up the issue of immigration reform is one of the first demonstrations of the new era.  There is nothing that indicates that the President is a softie asking for a kid glove approach.  He’s a Chicago politician with the chutzpah to take the big house, so he is adept at hard ball, and these were soft throws over the plate today.

More than anything one could see this as a warning.  A call for action not for immigrants but for an administration easily distracted by a million crises that needs to focus on the fact that this is a reform past due that needs to get done.

Congressman Luis Gutierrez spoke to the assembled crowd at a Methodist Church not far away.  He was frank about his conversations as a voice of the Congressional Hispanic Caucus with the transition team and the fact that there already seemed to be waffling and “wait until later’s,” but he was also clear in his promise to take the testimonials of broken immigrant families to a man who should understand the pressure of an immigrant family, and to get the immigration reform movement a meeting with the new President.

If that meeting happens and comes together soon, the movement will have its warrior, Congressman Gutierrez to thank, but will also know that they put their scarves, mufflers, sweat jackets, and skullcaps and their boots on the ground to meet the winter cold to win that meeting in DC even as others were still sleeping in from the partying and celebration of the balls of the night before.

The lights were reportedly on in the new President’s office at 530 AM this morning, indicating that he was at work.  The worker centers with their huddling day laborers were open at the same time.  These are the workers in the Obama speech, and this is the work ethic he understands.  It is also the work that he needs to now muster the political win to reward. 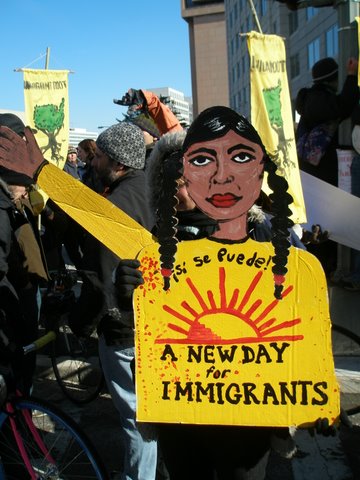 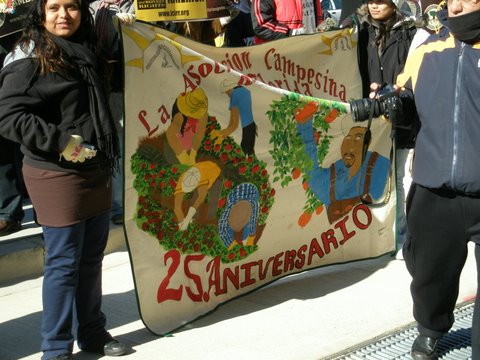 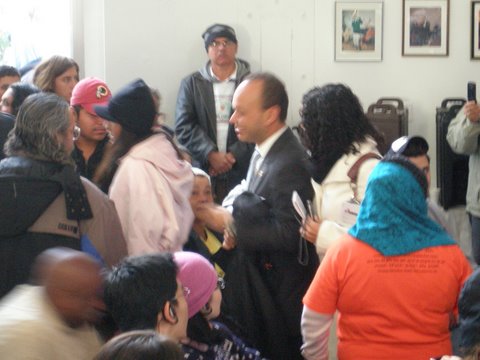 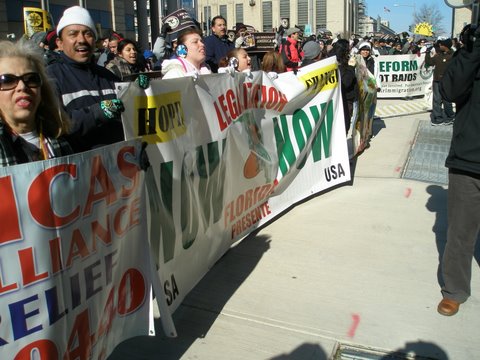 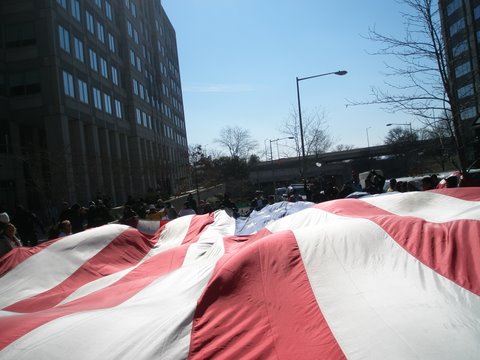 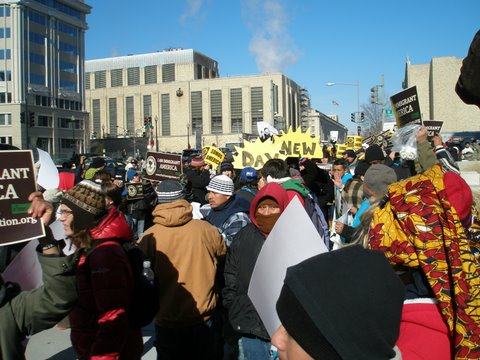