January 31, 2009
New Orleans               There was a brief squib on the wire that defied easy explanation.  One of the co-founders of Common Ground, an agency that had sprung after Katrina first with a health center on the West Bank and then involved in some recovery work on the East Bank, was revealed to be an FBI-informer who had fingered some folks for mayhem designed for the Republican National Convention in 2008 in the Twin Cities.  It seemed so, how should I say it, sixties?

We recognized the guy, Brandon Darby, though did not know him well.  For awhile when the building was reopened on Elysian Fields where all of us worked it was one of the few hotspots in the downtown area and a staging point for work in the 9th and lower 9th ward.  In the evenings some time Common Ground folks would stop by just to see what was happening.  The organizers and I remember Brandon being with them a time or two, but nothing special.

Now it seems that there may have been a lot more or less to all of this, because as more of the story trickles out, it really gets weird.

Everyone seems to agree that Malik Rahim from New Orleans, who had been around the local scene before the storm, and I think even a candidate for Mayor at one point, if I remember right, founded Common Ground along with Darby and another friend of theirs from Austin named Scott Crow, both of whom seem to have been activists there and largely anarchists more than anything else.  During the first year Darby even acted as executive director and as these things go seems to have been both in and out of New Orleans and the Common Ground crowd as they agreed or disagreed on one thing or another as happens.

Still this FBI informant thing is a little past the pale.  One thing to disagree, but it’s a whole different thing to rat on folks, or, even worse, as some now allege, to try and mousetrap people.

The local weekly in New Orleans, Gambit, ran a piece recently that quoted Lisa Fithian at length, which made me take another look at all of this.  Lisa was a former organizer for SEIU’s Justice for Janitors campaign, more than a decade ago.  We had her speak about new tactics about 8 years ago at an Organizers’ Forum dialogue because she was involved in some interesting and novel work with anti-globalism forces post-Seattle.  She even had a moment of fame with a big story and a picture in the New York Times Sunday magazine sections a couple of years ago, though I don’t remember the topic.  I even did a double-take in Washington last week when I saw her at the immigration rally we were putting together after the inaugural, but I didn’t get to speak.  Anyway, I had not realized she was anywhere around New Orleans or Common Ground, but so she seems to have been and she was quoted in the Gambit story with a lot of theories that this guy was a provocateur and might have been doing that duty for the FBI in the post-Katrina days.  She seemed to infer that some of the internal squabbles and problems that Common Ground had from time to time might have been this guy’s mischief.  She says they are making a bunch of FOIA requests to find out when Darby went over to the dark side, so to speak.

All of this is disconcerting.  Why would an anti-hurricane group be infiltrated?  Is that why they were coming by on a drop-in basis to the New Orleans ACORN operation then as well?  Why in the age of Bush did we need to go back to the 60’s and the Darth Vader times again?

I’m not sure exactly what may have happened.  Darby is suddenly not talking, but this is all both sketchy and creepy, and I want there to be different rules of engagement in the Age of Obama. 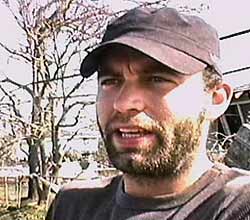