February 3, 2009
New Orleans               A raging front page story in the local papers as well as even the New York Times has been focusing on a showdown between May Ray Nagin and the City Council over the price and provision of sanitation services, particularly what they are all calling “Disney-type” services in the historic French Quarter.  Since Local 100 SEIU has represented sanitation workers for more than a decade, including before the storm, the specialized workers with the Downtown Development District that provided such services without the lucrative terms that were given in the most recent contract, this is something we know a little too much about.  Add into the mix good friends like Chad Pellerin and others who live in the heart of the Quarter and know a little bit too much about the real story and you have a classic battle royale.

The only big surprise here is that this is one of those, perhaps rare, situations in which Mayor Nagin is probably actually right, and the Council is probably dead wrong, and along with some of the remaining and long-suffering residents being held hostage politically and in this case environmentally by some typically New Orleans scamster business folks.  No matter how much people in the post-Katrina, especially the press, love to hate the Mayor for his general, inarguable ineptness in many areas, here he is simply doing his duty in refusing to have all of the taxpayers in New Orleans subsidize a slew of private business and multi-unit apartment owners who are ripping off and refusing to pay for their required special, legally mandated pickups.

The City sent out 8000 notices to small businesses and apartment owners particularly reminding them that for multi-address locations they had to secure private sanitation services (a dumpster right).  Our workers too often get caught in the firing line here because the garbage is sitting in the street where the business or apartment owner is just hoping to get over, rather than have to pay for the collection at all.  Some of these businesses are in the French Quarter, where the voices are loudest, the tourist are the noisiest, and the Council members too often are most willing to cave to these well organized contributors.  About 600 of such addresses had been getting free pickup through the contract with SDT, named for Sidney Torres, the sanitation contractor.

In recent days the City finally drew the line and told Torres that despite his multi-million dollar contract (Local 100 does not have a contract with Torres for this work now), they would resolutely refuse to pay for SDT collection from improper addresses.  Torres finally got the message and marked bags in front of such businesses with a big yellow X so that SDT workers would not pick up this trash.  So now all of the businesses, the press, and the pols are crying like stuck pigs.  Mardi Gras is coming in another couple of weeks and parades are beginning soon along with the usual influx of visitors, and this is one stinking Disneyland, if you will.

There really is no reason that French Quarter business and apartment owners should push both their garbage and the costs of sanitation over to the taxpayers of New Orleans.  No amount of stories in papers around the world can quite justify those claims.  Holding up the city for money also means that the same problem spills out from the Quarter to the rest of the City, and the workers we represent for residential pickup get ripped off directly since they become the Peter being robbed to pay the French Quarter Paul.  The Chad Pellerin’s of the Quarter still have to hose down their houses and stoops every day because the neighboring businesses are getting over.

Nagin only has another 18 months or so in office.  Better for him to finally make a stand and put an end to this typically New Orleans scam before some new Mayor has to cleanup a mess that only exists because bigger voices are yelling loudly to keep anyone from asking the simple question and demanding that they PAY UP! 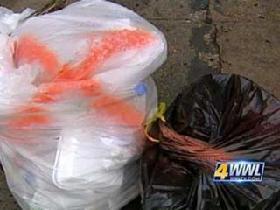