Bangalore Vinod Shetty of ACORN India and I joined members of the Farmers and Hawkers unions in Bangalore at the Press Club to release the conclusions of a survey report that our India FDI Watch Campaign had done in partnership with the large NGO, Action Aid.  Not surprisingly at least to us, 96% of the hawkers surveyed and 90% of the shopkeepers reported that their business had fallen and 99% of the hawkers and 72% of the small shopkeepers and street vendors felt it the new corporate chain stores were to blame.
We had surveyed 400 vendors and 100 shopkeepers in this project.  In addition to Bangalore we had done so in Bhubaneshwar, Chennai, Delhi, and Mumbai.  Vinod and I were both quoted competently in a nice piece in The Times of India, Bangalore.
The Press Club was fascinating.  Rather than the frayed edition that I was used to from Delhi, the Club in Bangalore was located across from the huge 200+ acre central park in the city on pretty large grounds that are well organized with seating areas, chairs and benches for continued interviews, enjoying chai and snacks (as they say here), or just hanging out, which seems to be the dominant activity of much of the press.
The Press Club had a separate room away from their main business which they schedule at 30 minute intervals for an almost continuous stream of different press conferences.  The speakers come in and out in shifts and the press does as well depending on their interest with some of the same staying and some different crews shifting in and out.  A highly efficient system where much of the working press and standard hacks are able to just hang out and let a fair amount of the news come to them.  The Press Club for a little over $20 USD sets the schedule, sends out the notice to the press, and serves chai to the press, while you do your raps.  Once done you can, as we certainly did, repair to the grounds around our benches and meet and stop to splice in an additional interview with late comers or those more interested.
This is a long way from the modern blogger world and the deep driven investigative reporting of legend, but when it works, it seems to serve everyone well, including the public. 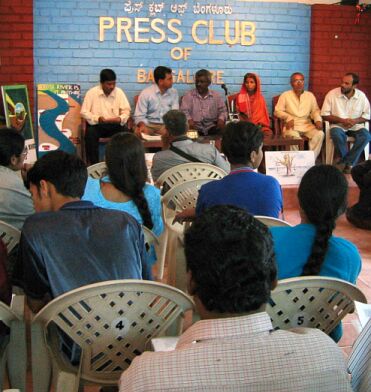