New Orleans         On the road for three weeks means a pile of messages I couldn’t access on the cell from India for whatever reason, email I couldn’t read for the same technical mysteries, and some old fashioned mail stacked up and waiting.  There was a surprise piece though, a book of some kind that only said on the outside that it was sent by David Clohessy, a former ACORN organizer in St. Louis and now the long time director of SNAP, a cutting edge effort that has doggedly forced accountability on the Catholic Church for priest abuses of parishioners.
The book was a volume by Samuel Howard Mitchell written about his father and his work with the Southern Tenants’ Farmers Union (STFU) called A Leader among Sharecroppers, Migrants, and Farmworkers:  H.L. Mitchell and Friends.  What a great surprise, I thought!  I wrote Dave a note of thanks.  He said he and his wife, Laura, happened to drive by an estate sale not too long ago and it turned out to be a politically progressive social work professor who had passed on and they had picked the volume up there.  What a treat!
H. L. Mitchell was the founding organizer in eastern Arkansas of the STFU, and someone I had tracked down in 1972 or 1973 when I was first beginning ACORN in Arkansas to try and get some insight into the experiences he and his folks had had many years before in building a seminal organization in Arkansas.  There’s a painting of him signing up some of these farmworkers in my office now as I write this.
I had driven down to New Orleans to interview him one weekend when he was stuck at a hotel near the New Orleans airport while editing the newsletter for a newsletter for the local union of the Amalgamated Meatcutters and Butcherworkmen in New Orleans who represented the Domino sugar workers near the Mississippi River.  I wrote the piece for the Arkansas Advocate, a short lived publication that Martin Kirby, a former Arkansas Democrat reporter and I had done in Little Rock at the time.   I kept in touch with Mitch off and on for the rest of his life.  The last time I saw him was in 1988 when he spoke to the Southern Historical Association when it was meeting in New Orleans, and I was living in the city again.  Mitch passed away in 1989, now twenty years ago.  The book brought back a lot of memories.
My companera was flipping through the pages as I showed her the book at home last night, and lo and behold, stumbled on a moving passage way in the back of the book on page 273, that said, “Philosophically, Mitch’s most important heir is the Action (sic) for Community Organizing Now (ACORN).  Mitchell addressed its convention in Memphis on December 8, 1978.”  It goes on and quotes a communication I had with Sam Mitchell in 1999, that I had forgotten as well.
It’s an honor to be part of the legacy of historic work and to be part of a national and global tradition of the work that continues to resonate over the years.  Sam Mitchell on the back of this self-published volume had a picture of a sharecropper’s house in Delmo in the Missouri bootheel where the STFU and its successors fought one of their great battles along the roadside there.  He mentions that some of the houses are still surviving and that he was donating any proceeds from the book to continue to support the work.
Good to be back home! 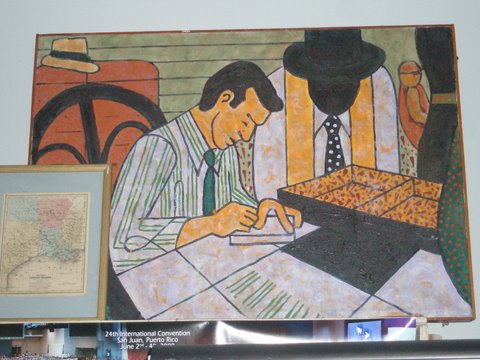 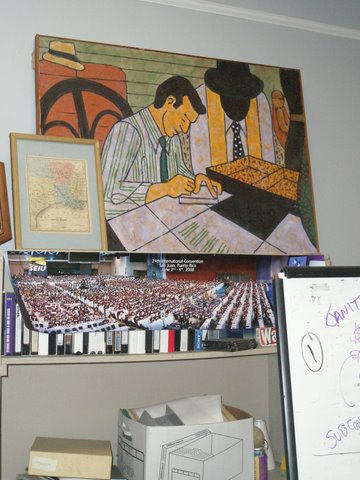