New Orleans         Moldova is squeezed into the crawl space of Europe between Ukraine and Romania.  It’s one of those former USSR countries trying to find a space and place in the world, and finding it hard to do so in the current mix and mayhem of the economy.  Though some might ascribe this simply to youth culture gone wild, there is something new happening in organizing for those who know how to use it and are paying attention.  I’m not going to claim to really “get” twitter yet, but I am becoming a believer in the potential of Facebook, and both of these were in the play.  Since we are following the development of new tools and tactics, here is certainly a huge example of something new in the wide world.  The following is a segment of a report from the Times:
Protests in Moldova Explode, With Help of Twitter
By ELLEN BARRY
Published: April 7, 2009
MOSCOW — A crowd of more than 10,000 young Moldovans materialized seemingly out of nowhere on Tuesday to protest against Moldova’s Communist leadership, ransacking government buildings and clashing with the police.
The New York Times
Chisinau is filled with young people who lost jobs abroad.
The sea of young people reflected the deep generation gap that has developed in Moldova, and the protesters used their generation’s tools, gathering the crowd by enlisting text-messaging, Facebook and Twitter, the social messaging network.
The protesters created their own searchable tag on Twitter, rallying Moldovans to join and propelling events in this small former Soviet state onto a Twitter list of newly popular topics, so people around the world could keep track.
By Tuesday night, the seat of government had been badly battered and scores of people had been injured. But riot police had regained control of the president’s offices and Parliament Wednesday.
After hundreds of firsthand accounts flooded onto the Internet via Twitter, Internet service in Chisinau, the capital, was abruptly cut off.
****************
I do need to caution organizer and other readers that when the Times was running huge magazine features on the use of text messaging and new techie tools that were pressurizing and overthrowing governments, we found at a meeting of the Organizers’ Forum that no small amount of the hype was manufactured in Eastern Europe by operatives with deep bank accounts who trained the young organizers and financed the “outrage” directly from conduits in Washington.
Despite that caveat there is no doubt that organizers and activists are finding ways around the systematic and more controlled media outlets in order to spread the word, rally, and organize.
That’s powerful, and certainly the government in Moldova got a wakeup call before they “turned off” the internet.
(Photo Credit) Gleb Garanich/Reuters
Protesters opposed to Moldova’s Communist leaders threw a sofa out a window in Parliament in the capital on Tuesday. More Photos >>
Photographs 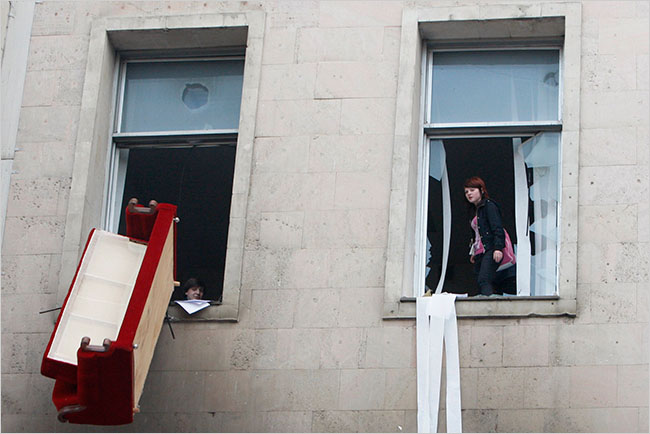