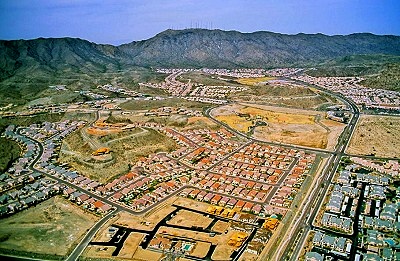 Phoenix We were sitting in the living room in the special, quiet, deep heat of a Phoenix afternoon visiting with the women of three generations of the Roman family. No fan or air conditioner or street noise could be heard at the end of the cul de sac on Pasadena Street. The silence was only punctuated by the rapid Spanish of the daughter’s explanations and answers to our questions and the deep sighs from the mother, and owner of the houses, which finally broke into inconsolable sobbing.

There were no heroes here, only victims living in a sad, tragic nightmare they seemed unable to stop.

Mrs. Roman’s husband had passed away in late 2008. She was now living on social security and help from her daughters. The mortgage held originally on her house in Mesa by Countrywide and now Bank of America had a balance of around $65000, since they had paid more than $30,000 down to buy the house only 8 years ago. The payments were a shade over $600 a month though at 8% interest, which was a lift on social security of hardly $700 per month. The other house, where we were sitting had been bought by the father for the daughter and Mrs. Roman had been living here since her husband died while they tried to get their lives together. Payments were also around $600/month on a similar balance with the loan held by CitiMortgage.

The Roman women needed help and went to a local company in the community to help them. The company promised them the world. There would be no problem. The payments would be lowered. The foreclosure proceedings would be vacated. They qualified for the Obama modification program and everything would work out. These rays of sunshine cost the Roman women $4500! They were also advised to stop paying the notes on both of the properties while this was all fixed.

The paperwork was turned in to the company in November 2009. Nothing was missing. Everything was in order. The house had been insured by FHA. Months and months went by. Finally in early to mid-May they were notified that they qualified for the modification on the house. Whoops! They were then notified this week, the day before our visit, that the house had been sold. What?!? They could not get details. The sale price was $51000. They had not been able to determine if the bank itself had bought the property, as they were told, or someone else.

Tonight we are meeting with 10 families who have had the same experience with Bank of America. This is the same situation faced by Frances Gomez, who we met on my last visit to Phoenix. What had seemed like a happy ending to the injustice of her story and the attention it received from ProPublica and USA Today, has also been a mirage. The company conceded that they had misread her paperwork and were wrong to have sold her house while she was working out the modification. Their lawyer in Phoenix assured me personally that the company had “bought back her house” and that all they wanted was a quick resolution for her. Representatives of Bank America in Washington assured me personally that they were moving to make this right. Nothing has happened. My last calls to the lawyer were met with stories that he was on a conference call. My emails and calls are now not being answered. Frances Gomez had been in her house for 30 years. All of these families have been in situations where they have qualified and met the standards for modifications but have not been able to get a final package from Bank of America. Senora Roman’s tale is the same as Gomez and the same as several others coming to the meeting. These stories start to resemble grand theft more closely than foreclosures. Promises upon promises and then the quick pull of the rug out from under the family and the hard shove out the door.

A Bank of America representative assured me personally that the company agreed that the Arizona provision of giving owners hardly two weeks to get out of a foreclosed house while giving tenants 90 days was wrong, and that the bank should at least accord the same humanity to owners for godsake as tenants, but nothing has been done there. Though Senora Roman was not told any details on the sale, she was absolutely advised to move out immediately.

Senora Roman had been told by her husband never to worry about the house. He had insurance that would pay the mortgage if something happened to him. No one can get an answer about the policy or what this might have been.

CitiMortgage is moving to foreclose the house where we were sitting in the midst of so much sobbing. They had just approved an extension to work out the modification by the end of June. Once again the Roman’s were told that they qualified. They worry. We worry that this could be another “okey-doke” deal like we are seeing everywhere with Bank of America in the Phoenix valley. The Roman’s are afraid to answer the phone. Who knows what sudden surprise they might find, even as they do all they know how to do and are asked to do in order to fix the problems with their home payments.

There had been some confusion we began to understand. The daughter had been told by the company supposedly representing their interests that the company would pay for lawyers to work it all out. Early in the meeting they had thought that we might be lawyers, rather than organizers.

Before we left apologies were made for such a profound insult. We were each given a Coke.

All I could do was warn them that they were in a fight and were already losing, but we would have no choice but to increase the heat. Bank America has to be stopped, but CitiMortgage, Wells Fargo, and others are all practicing the same “bait and switch” tactics. This almost seems a racketeering conspiracy to foreclose on working families’ houses, it’s certainly not a modification program when you look from the ground up.

They have to be stopped.