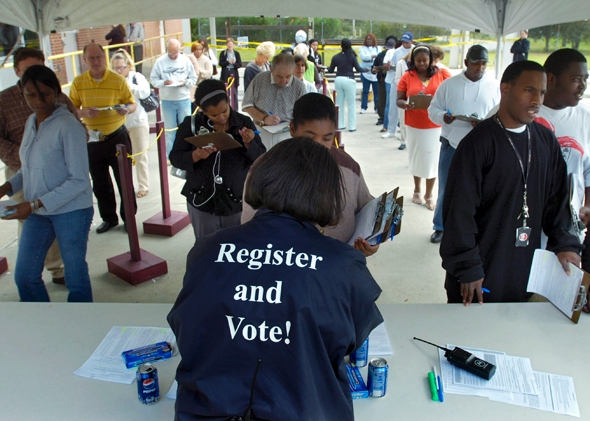 New Orleans       Georgia is scaring the Republicans.  Barriers to voter registration dropped over the last two years as the result of lawsuits and legislative action that made registration and renewal more accessible through automatic procedures that allow a voter to opt out of registering, but otherwise enfranchise them.  The results have been significant.

Reporting in the Wall Street Journal indicated that the change “helped fuel a 15% increase in Georgia’s active voter rolls to about 6.3 million in September from about 5.5 million in November 2016.  Black registered voters rose 15%, Hispanic voters 40%, and Asian and Pacific Islander voters rose 36%.  The number of women who are registered to vote increased 13% in the period and white registered voters went up by about 10%.”  All of that seems like good news, except for one simple fact, which the Republicans have understood very well for years.  Once you reduce the barriers, more potential voters are enfranchised.  Given demographic changes in Georgia and the growth of minority populations that means that more of this enlarged pool tends to favor Democratic candidates.  Thirteen states and the District of Columbia have voter registration laws that roughly align with Georgia’s.  All of which is why Republicans in many states attempt to suppress the vote.

Leveling the playing field so that it balances evenly with democratic governance based on voter accountability is a good thing for everyone, regardless of the partisan politics that tries to tilt towards authoritarianism.  Registration alone just signs up all of the players.  It doesn’t put them into the game.  An Oregon political scientist found that despite the 5% increase in that state’s registration, the “turnout effects were relatively modest” with about 30% of the new registrants voting.  New registrants who enroll after aggressive outreach and registration campaigns tend to vote in higher percentages than the rest of the population, but the Oregon figures seem to indicate that default auto-registrants are less motivated, so their participation would more likely be triggered by the campaign.

Voter registration periods for the mid-terms in many states like Arkansas, Mississippi, and Louisiana for example are now over, so the real push now has to be to get people out to vote.  Community radio stations are being encouraged to run GOTV public service announcements in regular rotation to keep the election date and the importance of voting in front of citizens.  For the next month this needs to be a constant push.

How could that be a bad thing?  Let’s get it done!