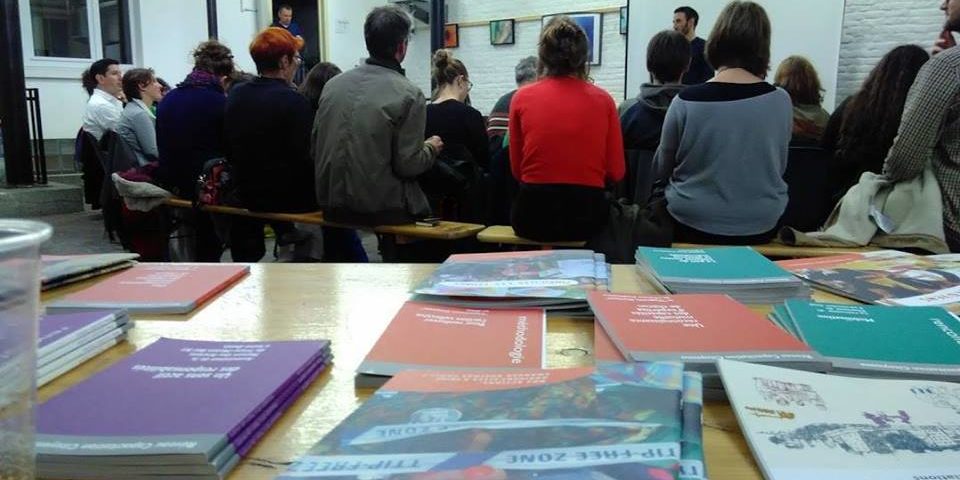 Brussels    Leaving Grenoble we jumped on the tram to then take the train to Paris, once there hopped onto the Metro to switch between the Lyon station and the Paris North station, grabbed another train to Brussels, disembarked to a local tram near the station until our directions said turn right at the corner when we saw the Lidl grocery store sign and walk until we found the address in this suburb of Molenbeek, made famous last year through the televised images of a street-by-street police search in this diverse community for terrorists.   What we found instead were the offices of Periferia, an interesting international non-profit where Adrien Roux of the Alliance Citoyenne/ACORN and myself were warmly greeted and almost immediately stepped into a meeting with them, one of their colleagues — the director — on Skype in northern Brazil, and several representatives from CIDSE, a global coordinator of religious donors, including Misereor.

I was inclined to like Periferia almost from the time we sat down when I opened a short pamphlet they had produced in French about community organizing.  Regardless of my language deficiency, when I counted five pictures of our French affiliate the Alliance Citoyenne in the tract as well as a lead picture from the ACORN Chicago convention and an excerpt from Lee Staples, Roots to Power, where he reprises an ACORN doorknocking rap, I might be sitting in Brussels, but I knew I was at home among friends.  Periferia is also sponsoring several days of community organizer training that we are doing in Brussels for local organizations as well as colleagues from Germany and the Netherlands.  Besides promoting community organizing, they have worked extensively on participatory budgeting projects pioneered in Porto Allegre, Brazil.  In fact, the name of the nonprofit comes from their Brazilian experience at working on the periphery in marginal communities and then transferring the lessons learned back to Belgium and the European context.

We talked less about that than the fact that Periferia’s staff also acted as a consultant to Misereor, the German Catholic NGO that distributes resources from the government as part of the German foreign aid program and historically has been a key funder of organizing and social action projects.  Patrick Bodart was preparing to tour a number of countries in Latin America to evaluate Misereor projects and also described an exchange they had facilitated between several Brazilians and several activists from Mozambique involved in fighting land grabbing and how that had worked.  One thing led to another with our CIDSE friends as well as Adrien and me once we got to talking about land grabbing, squatting, land trusts, and all manner of projects involving peoples’ struggles with land ownership and occupancy in both urban and rural settings.

Adrien and I learned a lot and shared out opinions frankly.  We wanted the funders to do more, especially in supporting grassroots community organizing and direct action.  There was a great, healthy exchange.

And, then we ate apple crisp, as my mother and grandmother used to call my absolutely favorite of all times dessert – ok, next to maybe jam cake, but that’s only for Thanksgiving and Christmas.  When you’re eating apple crisp and drinking coffee after a three-hour meeting, what’s not to like about Brussels and the Belgians!