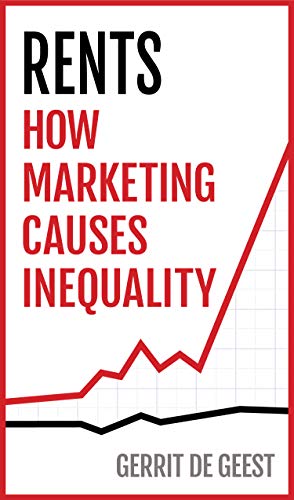 New Orleans       When I first read an email about Washington University’s law Professor Gerrit De Geest’s book, Rents: How Marketing Causes Inequality, I thought, right on!  Soaring rents for tenants are absolutely driving inequality in city after city.  Actually, looking at the book was different, but perhaps more important.  When De Geest is talking about “rents,” he’s referring to the artificial profits that would not exist in a free, competitive market.  The term “rents” original did refer to tenants of course but as the term has aged from economist David Ricardo’s initial argument rents are now a major economic distortion.

Professor De Geest and I talked at length about his argument on Wade’s World recently. These rents or artificial profits in his calculations have grow from 20% of the US economy in 1970 to more than one-third of the economy now.  Most of those artificial profits have been collected by corporations and the rich, and they have put the mechanism to drive these fake profits in overdrive making the economy a rigged game to put it kindly.

De Geest points the finger at business schools and the dominance of their constant refrain about marketing.  It would not be too far to state that past simple communication about the existence of a certain product, everything else is designed to created artificial profits for products that are virtually the same.  Certainly, this is the heart of branding as a process of convincing consumers that identical soaps, detergents, cars and so forth worth more or less depending on the marketing.   We shared examples from both of our brief experiences working in grocery stores and food supply businesses in our youth.  Working at Luzianne Coffee Company in New Orleans in their warehouse and shipping dock, it was easy to see the exactly same blend of coffee being relabeled for the local market and plain labeled for shipment on a contract to provide coffee to our soldiers in Vietnam.  De Geest talked about a weekly “bonus special” at the store where he was a clerk.  There were no price reductions.  They just moved the items from one part of the store to another.  These are rents or artificial profits, and once you start looking through De Geest’s lens, they are obviously everywhere.

Part of De Geest’s case is that business schools promoting marketing have overwhelmed law schools undergirding regulation and economic fair play.  In leveling the playing field, he is not a fan of taxes, unions, or other potential economic actors because he believes in conditions for an ideal free market, so he’s jaundiced on rebalancing what he sees as one problem for another.  He advocates expanding the country’s anti-trust laws to put some sharper teeth in curtailing some of this, and generally stepping up the role of law and regulation in the economy.  Good luck with that with Congress and the President where they are today.

Regardless, De Geest’s arguments deserve a hearing, and, importantly, they give some names and faces to why inequality is continually expanding and making a myth of any arguments about so-called “free enterprise” being fair.