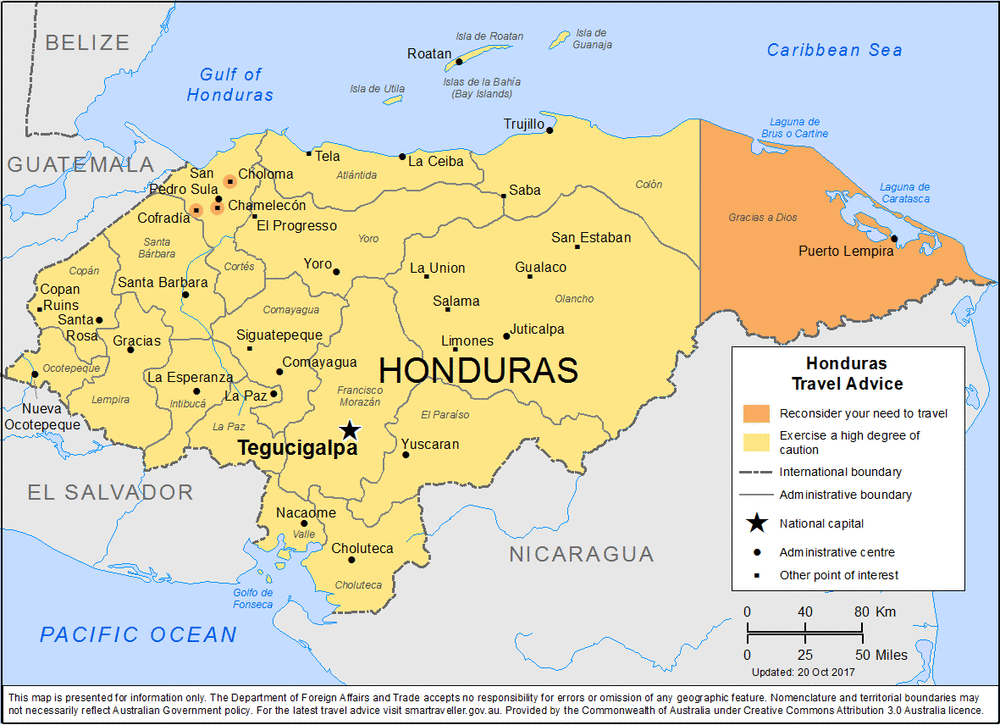 San Pedro Sula     It started innocently enough.  It wasn’t intended, but was clearly meant to be.

I had to drive from San Pedro Sula to Siguatepeque, Honduras.  I woke up early, as always, and the first order of business, as always, was measuring the “architecture of my day,” which in this case meant determining what time I had to leave SPS, and whether I would get to have breakfast before doing so.

I had been warned that there were construction delays on C5, the major highway between SPS and Tegucigalpa.  A colleague had driven there the night before and warned that there were problems.  When I put the name of the restaurant and its only address in Google Maps, my go-to GPS navigation guide around the world, it said 3 hours 13 minutes to Siguatepeque.  I was surprised.  The kilometers listed should have meant barely 2 hours.  The ACORN Honduras delegation was taking the bus, and it was only slated at 2 ½ hours.  Wow, I thought the delays must be huge!  The meeting was scheduled for 10 am.  I would have to leave by not later than 6:45AM.  No problem, but no breakfast.

My handy Aeropress had guaranteed me an early cup, and I grabbed another as I left, and was off.  Weather was good, and despite the craziness of Honduran drivers, I was making good time.  The construction did run off and on for 10 or 20 kilometers, and drivers did try some crazy passing maneuvers on curves and in the face of ongoing cars, but that’s par for this course.  I still seemed to be making good time.  Looking down off and on to check with Google Maps on my progress, it seemed I would make it exactly at 10am to the restaurant, but the number of kilometers shown below the time would have made me think I would be there more than an hour early.  I passed the giant lake in the cone of a long dead, we hope, volcano, in the mountains there.  This is near the halfway mark on the drive to Tegucigalpa.  Strange, but, there might be more delays ahead.

I kept rolling on C5.  All of a sudden, I was getting messages from the Google automatron voice that I needed to make a turn.  I didn’t see any sign to the town or turnoff.  I was still getting the same time estimate.  A couple of kilometers later, Google rerouted, and it had me arriving almost an hour later?!?  Google demanded that I turn right where the last instruction had been left.  I did so.  In no time I was driving on the main street of a small town and now Google showed a roundabout map to Siguatepeque that put me there an hour and forty-five minutes late.  I made a U-turn, and pulled over to reset the map and see where I had missed a turn.  I backtracked having now lost 20 minutes.

I found the turn Google demanded:  Calle de Rio Bonita, the street of the pretty river.  Within 100 meters I was on a dirt road.  Hmm…really?  Mi companera calls these kinds of roads, pig trails.  Yes, I did meet a pig with a wooden collar on my overland odyssey, but Calle de Rio Bonita was nothing but dirt, rocks, and deep, deep ruts for almost two hours in which I meandered over and around amazing, green mountains until arriving through this backdoor to Siguatepegue.  The road was a slander to the reputation of a pig trail!  I knew Google was off within the first 30 minutes, but no matter, the automatron insisted, and going forward became the better alternative than going backwards, or so it seemed at the time.

Meanwhile for two hours, I was on an amazing adventure, partially in the very art of driving with rocks constantly scrapping the bottom of this tiny rental car and the deep ruts that had to be navigated along with seven different water crossings of the Rio Bonita.  But, also because I was pushed back in time to previous centuries where families subsisted on the land alone.  I passed naked and barefoot children.  I passed children working with adults in the fields.  Families carrying firewood on the road, on burros, on their backs, under their arms.  Men leading or riding horses that picked their way among the rocks. Men swinging long machetes, bent to their work.  Fields that had recently emerged from clear cutting for crops of bananas or corn with the burned stumps still standing knee high among the rows of planting.  Pickup trucks with workers and teens standing or sitting check to jowl and riding the roads like a bucking bronco.  I passed signs more than a half-dozen times that indicated I was in or bordering the great Nacional Parque Cerro Azul.  I think I may have crossed the Cerro Azul peak in the clouds which means Blue Hill in Spanish, but I can’t swear to it.

My experience seems a metaphor for our modern lives at the mercy of artificial intelligence, while Google and the gang try to catch up with ground level reality and we, willingly as it seems in my case, surrender our common sense to these overlords speaking through our not so smartphones.  At the same time, there’s something atavistic deep inside that protects us from this slavery, and that’s our embrace of adventure, the wonder of life, and the willingness to live with the consequences.

I finally made it into town.  Within minutes moto drivers were pointing to my back-right tire that I had blown it coming into civilization.  What irony, a flat tire once I hit pavement!  How lucky for me that it happened in a town since the spare was also flat.  I sent a WhatsApp message to my team at the meeting that I was changing a tire on the main street.  Twenty minutes later I was at the meeting catching up on ACORN business.  The tire was past repair, and I had calculated the risk and driven back to SPS without a spare.  Budget charged me $80 despite my arguments.

Frankly, it was worth every penny for the experience, and for the lesson it taught me to doublecheck with a look at a map, before I leap into the next adventure, where I might not live so well and be so lucky.  I also gained a deeper understanding of the fullness of the Honduras where we were building our organization, and that was even more valuable!