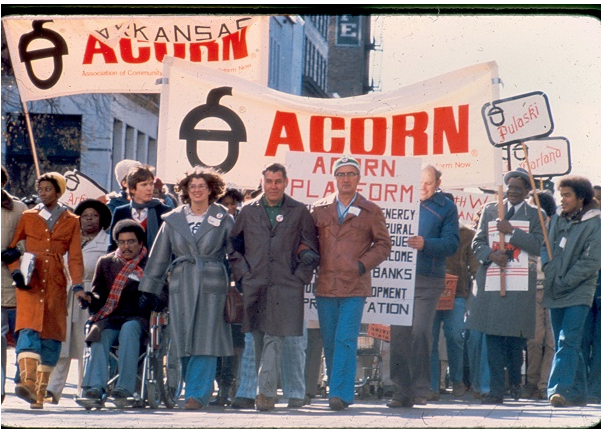 Milwaukee       Before taking my traveling road show from Madison to Milwaukee, I spent some time in the ACORN archives that are part of the Social Change Collection of the Wisconsin Historical Society.  Perhaps four years ago, WHS archivists had picked up another 35 cartons of material from our hall in Baton Rouge where we were storing a ton of stuff that had been in our various New Orleans local and national offices.  I met with one of the archivists who had recently finished accessing, filing, and sorting through the most recent bunch.  He claimed it “filled in some missing pieces,” and that was good news for all of us.

I had been naïve in my first visit to the archives some thirty months ago, thinking I could buzz through the collection.  Over the week I visited, I may have jumped around in thirty or forty boxes.  It was a start, but I was most impressed at how much I had underestimated the task, especially since I was looking for old strategy and program memoranda.  There are now 224 cubic feet of paper archives and that means 224 boxes of materials.  Plus, there are more boxes of photographs and hours and hours of video.  That’s a mountain to climb.  I joked leaving that it would take me two or three months to go through all of what they had.  The archivist at the desk, suggested summer was better than the winter.  Indeed!

Once in Milwaukee, I stopped at a coffeehouse nearby the University of Wisconsin – Milwaukee where I was due not long afterwards.  Within minutes, a fellow approached me and identified himself as Dan Grandone, a former Gamaliel community organizer, who was going to the event later that day and now ran a leadership development program with a great name:  WILD.  Anytime you can run into random community organizers on the street by chance, take my word, you’re somewhere close to heaven if you want to note this on your GPS.

At the event there was a former ACORN canvasser in Minnesota and a former ACORN organizer for a brief spell in another office.  UM-W Professor Aaron Schutz, my host, cracked that the urban studies department was chock full of ex-ACORN folks.

It gets even better though.  During the call and response after the meeting, one young man spoke up and gave a testimonial to ACORN.  Turns out he had a slew of relatives in the Lower 9thWard of New Orleans, including a sister who said ACORN had helped get her house together after Hurricane Katrina.   Another young man spoke up not long afterwards saying he was a community organizer in the Milwaukee and wanted to know how they could connect with ACORN.  After the meeting, I visited with all three of the delegation and they turned out to be connected to the Amani neighborhood and the Dominican Center.

The Amani neighborhood has seen steady decline in crime since 2005, including another 12 percent decrease in 2017 alone. It’s located between 20th and 27th Streets and between Center St. and Keefe Ave., right in the middle of the 53206-zipcode.  In fact, one experienced organizer told me that this zip code had the highest incarceration rate in Wisconsin, and perhaps the nation, but crime over this period has dropped at almost double the level of the city as a whole.  They want to see how to bring the ACORN Home Savers Campaign to Milwaukee and how to link up.  Yeeha!

It’s these kinds of surprises that keep me hitting the road, rain or shine, sleet or snow, and here there was plenty of the latter, but these kinds of conversations made the sun shine for me.