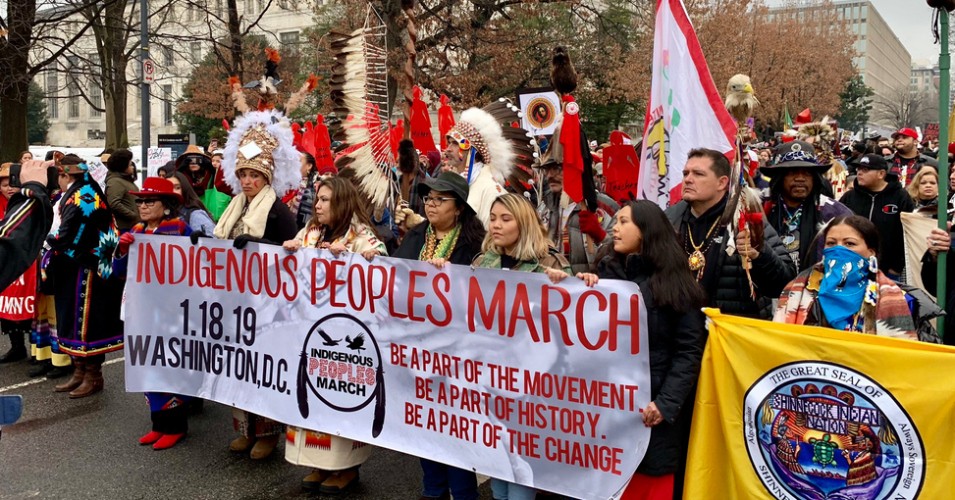 New Orleans        I heard King, though not clearly, as one of more than 100,000 once at the Spring Mobilization Against the Vietnam War in 1967 in front of the United Nations.  On the holiday in honor of Martin Luther King, we think back on his speeches on the Washington Mall and the dream he shared of another world much different still than the one in which we live.

Incredibly on that same mall, we now are forced to read about youngsters from a catholic high school in Kentucky near Louisville, wearing Make America Great Again Trump hats, in a verbal confrontation with an elder Native American.  After a protest at the Lincoln Memorial with other native groups, with his drum beating he had stepped into the middle of a racial confrontation between these hopped up white boys and a black group.  No one would expect this to turn out well in these days and times.

All of which brings me back to Tony Perkins and the hate and division he broadcasts on a daily basis in his “Washington Watch” radio show which stirs the pot for this kind of mayhem, just as he was doing last week in beating his drum to hype up the crowd going to what has become an annual Right to Life March on the mall.

Tony Perkins is not just another rightwing motor mouth.  He’s a serious hater.  If you’ve missed the positions he and the Family Research Council espouse, here’s a short list.  He’s livid about LGBT rights.  He’s touted a constitutional amendment defining marriage as strictly between a man and a woman.  He’s against the minimum wage, but he’s OK with white supremacists.  He has spoken to such groups, and he bought the mailing list from David Duke and the KKK when he ran for Senate in Louisiana.  He’s all about religion, but has slammed Islam.  The Family Research Council has been classified as a hate group by the Southern Poverty Law Center.  You get the picture, right?

What is frightening to me is looking at the guest list for his radio show, especially now that I have listened to it recently on the road through southern Arkansas and northern Louisiana.  There’s nothing secret about this, it’s hidden in plain view on his website.  Recently, he has had as guests Senator James Lankford (R-OK), Representative Mike Johnson (R-LA), Representative Chris Smith (NJ), Representative Virginia Foxx (R-NC), Representative Jeff Fortenberry (R-NE), Representative Brian Babin (R-TX), Representative Vicky Hartzler (R-MO), Senator Mike Lee (R-UT), Representative Don Bacon (R-NE), Ambassador Sam Brownback, the former Republican Governor of Kansas, and, here’s a gut check, Vice-President Mike Pence.  And, hey, this is just the politicians and elected officials who have been with him on his show in January!

No question many of these folks are his fellow-travelers, but it’s one thing for birds of a hateful feather to be flying together, but is this really the kind of company that the elected Vice President of the United States should be keeping?  This is a blatant endorsement of Perkins, the Family Research Council and its positions.   This Right to Life march seems to bring out the worst in folks.  Vice President Pence in this context makes King’s dream, another of our contemporary nightmares.