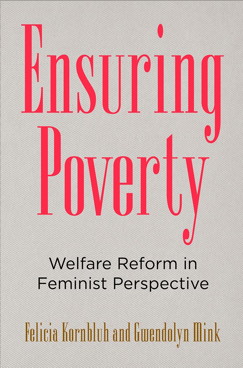 New Orleans   You may have missed the fact that welfare reform was on the priority list for the new Congress as it took office in Washington.  You may not have noticed all the signs at the Women’s March there and elsewhere demanding improvements in welfare benefits for women trying to raise children in the current system.  In fact, you may have missed the mention of welfare in the special New York Times supplement featuring stories about the war on poor women as mothers.

In fact, you may have missed all of these references to welfare report and the drastic need to really reform the welfare deform of the last twenty years, because they don’t exist.  Mothers and others on welfare, including their children, have become invisible except as political fodder victimized by old racist and classist tropes about welfare queens and baby-benefit-machines.   Welfare reform was not a priority for the Congress or raised as a major issue by all of the record-setting women who were newly elected.  There were no signs at the women’s marches demanding welfare reform.  The tragedy and travesty of the modern welfare system for poor women as mothers and the price paid by their children was not mentioned in the New York Times’ supplement.  Except as a punching bag for the right, welfare recipients have become invisible.

All of this was grist for the mill in talking to Felicia Kornbluh, a co-author with Gwendolyn Mink, on Wade’s World about their new book, Ensuring Poverty:  Welfare Reform in Feminist Perspective.  The only thing clear about the results of the Clinton-era so-called reform “of welfare as we know it” has been how much money it has saved by governments by denying benefits to welfare recipients.  The title of their book is clear.  This is “ensure” as in guaranteeing poverty, not “insure” with an “i” that might entail protecting against poverty.

The book details the results of these deforms:

The only way to miss the disastrous impact of these reforms and their ongoing punitive impact, is by not looking.  Kornbluh and Mink argue persuasively that it is has been accomplished in no small part because the intersectionality of race, gender, and income have victimized welfare recipients as women and mothers.  Their feminist analysis is also not kind about the division among feminists that has abetted this tragedy.

Part of their book is the story of the Women’s Committee of 100 that formed during the reform fight to argue for a different path.  The committee was largely spearheaded by Hawaii Democratic Congresswoman Patsy Mink, Gwendolyn Mink’s mother, and both Kornbluh and Mink were counted among the one-hundred.

With all of the current discussion of inequality, it was hard not to ask why we don’t have a Women’s Committee of 100 and a standing army of millions of welfare recipients and their supports demanding real reform now.  The time will never be right politically, but the need continues to be urgent.