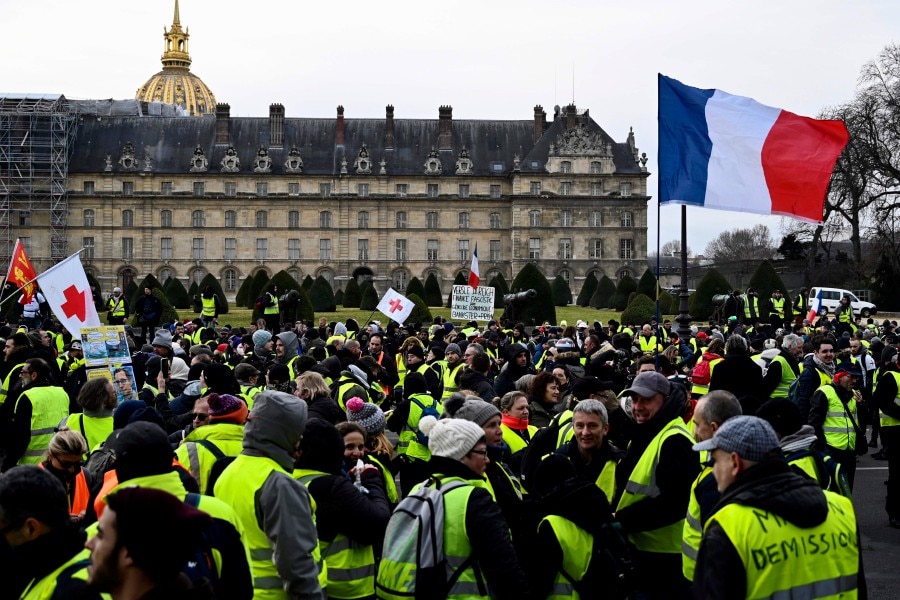 New Orleans        The “Yellow Vest” protests have gone on for months now in France.  The protests began to spread throughout the country as people protested the government’s increase in the taxes on gas.   On successive weekends, especially in Paris, where marchers went right down the picturesque and usually tourist-filled Champ de Elysee to the Arch of Triumph, but also joined by tens of thousands throughout the rest of the country in cities and towns, large and small, the demands morphed into a more generalized protest against the policies of the president, Emmanuel Macron.  These policies were seen as sweepingly pro-business and favoring the wealthy.  Macron was something of an upstart candidate with an newly formed amalgamated political party with pieces from his former Socialist membership and other parties and politicians that sensed a winner.  Even before the gas hike, Macron’s program had become deeply unpopular, and his own poll ratings at 39% approval are about equal to President Donald Trump’s standing in the United States.

The protests are named after the yellow vests that are required to be kept in all vehicles licensed in the country, so that when a motorist has problems they can more easily be seen on the highways, thereby preventing accidents and fatalities.  That’s a great idea and a great symbol for the protests and protestors.

An idea that that seems less great and almost an obfuscating, delay tactic is Macron’s recent effort to respond to the protest and the anger underlying them with a national talk-a-thon.  He announced this at a meeting of 600 mayors from around the country that he pulled together to explain the dialogue, claiming it would be responsive to the protests.

On the face of it, this is an interesting and novel tactic, though of course not easy to pull off.  There are 67 million people in France.  In US terms, this would be a coffee klatch that would include everyone in California, Arizona, Nevada, New Mexico, Utah, Oregon, Washington, Montana, and the Dakotas to reach a similarly sized population, even though the geography is much different.  Early polling is not promising to Macron.  70% of respondents indicated that they doubt that this gabfest would do any good or make a difference.

Of course, the government has their fingers of the scale as well.  Though Macron claimed that nothing was “off the table” for the discussion, he also focused on four hey areas and posed several questions.  One question for example tried to tie the Yellow Vest protests to controlling climate change, diluting the fact the protests seem to be largely fueled as much by a reaction to tax breaks for corporations and the rich, and gas tax hikes for the rest of the country.  Protest leaders for the Yellow Vests have responded with their demands for national plebiscites on new government policies through an initiative process as well as lowing taxes and reducing officials’ salaries, quickly gaining 140,000 on-line signatures.  The input process, both online and direct, is supposed to cap off by mid-March, and Macron promises to respond by the end of April.

There are also risks for the government.  It’s hard not to see this as a smoke-and-mirrors process to sap the energy from the continued protests, already weakened after the gas tax was withdrawn and other concessions offered, and redirect that energy into a lot of talk over months of time.   While attempting to co-opt the movement with this tactic, Macron also may find himself in a situation where anything less that a full and comprehensive response backed up by real programs and potentially constitutional changes would make this process look like nothing other than a charade, putting his government in even worse peril.