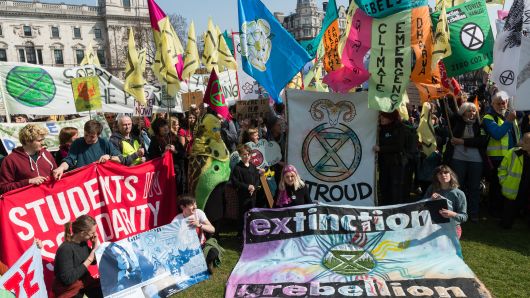 New Orleans    Extinction Rebellion is an interesting burst of energy and protest pushing governments, initially in the United Kingdom, to act immediately to avert catastrophic climate change.   Bursting onto the scene less than a year ago with actions in the fall and now calling for non-violent civil disobedience during the final two weeks of April, they have been front page news in London.  Their hallmark has been hard hitting, disrupting and innovative actions, which I find interesting and worth following.

More than 1000 have been arrested in London so far.  The Mayor of London mobilized more than 2000 additional police to deal with the disruption.  Attempts to confine the demonstrations to the Marble Arch in London have been unsuccessful.  Demonstrators have blocked politicians from entering the House of Parliament.  Others disrupted Parliament by disrobing there with messages printed on their bodies.  Some have super-glued various parts of their bodies, including their rear ends, to public areas to make their point.  Bridges, roads, and the London Underground have all been blocked at various times.  With Extinction Rebellion’s encouragement, actions have been joined in several other countries as well.

Their website lays out their objectives, structure, and principles:

We organise in small groups. These groups are connected in a complex web that is constantly evolving as we grow and learn. We are working to build a movement that is participatory, decentralised, and inclusive.

It’s easy to critique this kind of Occupy-lite effort for the climate.  They avoid any economic or political analysis adopting a “make the government act” program rather than going after polluting businesses or policies.  They are oblivious to class and gender.  They don’t worry with sustainability, staffing, or membership.  They focus on the Chenoworth 3.5% notion as if it were a biblical guarantee, rather than a shaky post-Leninist notion.

So what?  Climate change is disruptive to the future, so it needs disruptive tactics to meet the peril and make it immediate, rather than in the by and by.  I’m not saying, let a thousand flowers bloom, but it sure wouldn’t hurt to have Extinction Rebellion and some other hellraisers taking action to stop business as usual and increase the heat on policy makers and politicians by demanding – and acting on their demands – until they force a response.  Some may take potshots at Extinction Rebellion, but for now count me in the stands cheerleading and leading the applause.  Their actions are important and make a difference.