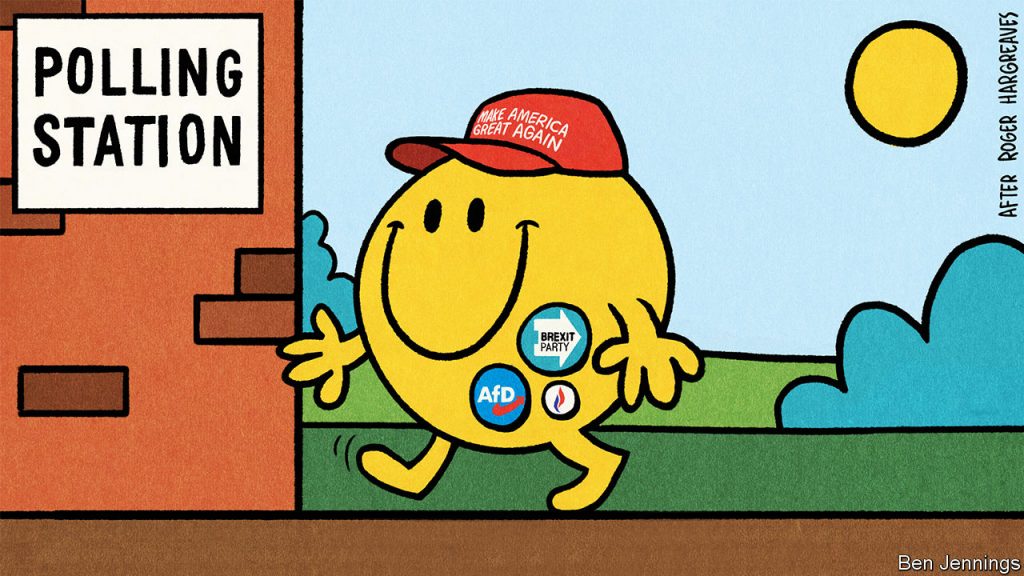 Gulf Shores  James Carville’s quote in the Clinton campaign “war room,” that “it’s the economy, stupid!” will be in his obit.  I’ve read one report that argued that Trump would be re-elected, regardless of his polling numbers and approval ratings, if growth was above 3% in 2020 before the election.  The notion that economics drives politics has an almost ideological weight no matter what the form of government and whether in the USA and India or China and Russia.  One could argue that in this area, inarguably, Marx was right.

What explains the support for radical, far right politicians and parties all around the world even when economies have improved?  Some now argue it’s as much, if not more, about happiness and personal perspectives on well-being, as it is about economic security and expectations.

The Economist really took on this question.  They started by referencing a study by George Ward of MIT, where he,

“…confirmed the political significance of happiness. He looked at what best explains the variation in the incumbents share of the vote in 15 European elections between 1973 and 2014.  Life satisfaction, he found, was twice as important in explaining how incumbents did as the unemployment rate and about 30% more important than GDP growth.  Ward also found that…almost half of those who were very satisfied with their lives said they would vote for the incumbent while less than a third of those who were not at all satisfied would.  Research from America suggests that happiness has as big an effect on voting patterns … as education.”

Now that’s interesting.  It aligns to some degree with the increased importance pollsters and pundits have placed on right track versus wrong track surveys of popular opinions about the direction of the country that are also decoupled from pure economics.

The Economist, being a conservative-leaning, business-supporting journal, is worried about this, especially in the face of one rightwing party after another in Europe and politicians like Trump and Ford in North America being elected despite improving economies.  Additionally, they, and others like-minded, are confused that older people rather than becoming more settled and satisfied after reaching the age of 60, are raving mad and throwing their votes into this same radical fire.

They raise the distinction between “evaluative” versus “hedonic” happiness being important.  Evaluative looks at how you view your life today.  Hedonic responds to how you felt yesterday.  Measures including the World Happiness Report see an upswing towards hedonic happiness confronting politicians that have always assumed evaluative happiness was the ticket to ride.  Some US polling indicates that the results of basketball and football scores for favored teams can alter voting patterns in this way.  In Switzerland, rain can throw governments under the bus.

Maybe this isn’t new, because the real deal may be how unhappy people feel when they feel things are getting better, but that they are being left behind, which is certainly part of what Trump is banking on.  The Economist notes that would not be new.  Seymour Martin Lipset noted the contradictory surge for the Ku Klux Klan during the boom times of the 1920s in the US.  More contemporary work from economists in the Netherlands found growing support for the radical right in Europe from those feeling slighted.

Maybe it’s not enough for politicians to just line the pockets of the rich, and then for them to tweet and Instagram their good times.  If looking differently at happiness makes politicians look at all of the folks left behind, not just the rightwing shouters, it would be a great thing for all of us on the bottom.

New Orleans        I’ll be honest I’m enjoying reading every line of this.

Page 6 of the Wall Street Journal had another article on the high-life high jinks of Wayne LaPierre, the chief muckety-muck of the National Rifle Association (NRA). Earlier they had reported on some $270,000 worth of clothing that LaPierre had charged to a vendor.  Today, they revealed that the vendor was Ackerman McQueen, the Oklahoma City based public relations and media contractor for decades to the NRA, and a company with whom LaPierre had historically been thick-as-thieves.

The other shoe that dropped was not related to haberdashery, but travel.  A letter was leaked that Ackerman McQueen had sent the NRA board about $240,000 worth of travel expenses that LaPierre had charged to the company’s credit card without adequate documentation.  The junkets included trips to the Bahamas and Italy.  All of this could be grist for the mill in the New York State investigation about the NRA’s tax status of course.  It also indicates the wounds are still bleeding in the internal disputes within the NRA over the falling out between LaPierre and his forces on the board versus the Ackerman McQueen allies.  Hey, LaPierre had their credit card for a reason, and I would bet money that none of these half-million bucks worth of expenditures would have every hit the light of day if they hadn’t fallen out.  Meanwhile LaPierre was being paid $1.4 million a year according to the 2017 IRS 990 filing for the NRA with the IRS.

That’s not all of the good news.  The scourge of workers and people-first policies in the name of business, the Chamber of Commerce, was front page news in their fall from influence, if not grace.  Executive salaries are up of course but lobbying expenditures and corporate donations are down in recent years.  Reportedly Trump wouldn’t shake their lobbyists hand, because they didn’t back him in the 2016 race.  Furthermore, his wild-right roll has made their traditional business-first conservationism passé.  Republican congressmen and senators were routinely quoted saying their emperor has no clothes anymore.  Meanwhile they are having an internal shake up as well, because they were out of step with big corporate power on social issues like gender and sexual discrimination.  They even have had to revise their vote-scoring system to boost the scores of some of the hated Democrats.  Their boss, Thomas Donahue, made $6.6 million in 2017, travels in a chauffeured SUV in DC with a two-man security detail, flies the chamber’s private jet to his Florida vacation home, and brings his doctor along on overseas trips.

Nonprofit DC lobbying is great work if you can get it, or so it seems.

All of this was in the businessman’s daily news source, Rupert Murdoch’s The Wall Street Journal.  The editorial and op-ed pages can still peel paint off a car, but the rest of the book is burning up the track.

Old line conservatives and Republicans of all stripes must be screaming in the middle of the night when central pillars of their house like the Journal, the NRA, and the Chamber of Commerce are showing deep cracks and roof cave-ins, leaving them few of the usual places to hide.