Catania    I had heard about iWatch before arriving in Tunis from one of our leaders in Grenoble, who has roots in Tunisia, and said we had to meet with them.  Their website seemed to identify them as an anti-corruption nonprofit.  Once in Tunis it seemed to the Organizers’ Forum delegation that everywhere we went, we heard about their work, whether it was at the Jasmine Foundation or in the Nadha party offices.  When it came to talking about institutions that were protecting the democracy, iWatch would be mentioned.  Quickly, it became clear that they were absolutely monitoring corruption, but they were also smackdab in the middle of the election process itself.  In fact, one of the candidates leading the polls was running from jail and it seemed he was in jail largely because of the work of iWatch.  Finally, it was becoming clear why the president Achraf Aouadi was having trouble fixing the time:  they were in the bunkers with incoming fire from all sides.

We met with Achraf on our final day at the Café du Theatre, which had become our clubhouse of sorts where we had conducted one meeting after another on the main boulevard of Tunis.  Achraf jumped right into our briefing with no holds barred.  They had sued four of the candidates for corruption, violations that the court was now considering.  The suits had gone viral.  Polls indicated that almost a quarter of the population knew iWatch and those who knew it were wildly supportive.  They had learned something else from their analysis of the data.  Where they thought their primary support was young men, it turned out to be younger women.  Where they had thought they were mobilizing primarily their friendship networks, it turned out they had a national support base. 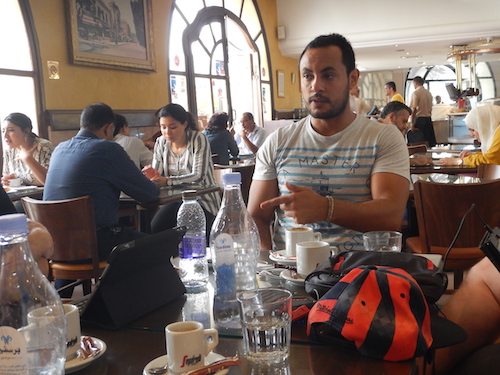 The organization was founded as a nonprofit after the revolution in 2011.  When we asked Achraf about the scope of their organization, he flatly stated that in terms of the civil society sector they were probably only second to UGTT, the big trade union federation, in resources.  Their budget had blown up during the elections to $1.5 million USD, all of it coming from outside donors, largely the European Union and Scandinavian countries.  They had seven offices in regions around the country.  Their staff was around 140 people now and normally almost fifty.

As president of iWatch, Achraf was not an employee, so like ACORN there was a separation of elected leadership from paid staff.  He made his living as a consultant for various enterprises both public and private.  They were young, hip and different.  They did festivals for a month instead of conferences.  They wouldn’t go to luxury hotels.  They abhorred USAID funding. The organizational structure was complicated.  They had recently decentralized with directors of the various teams from research to communications.  Wisely, they had applied for a radio license in Tunis.  They wanted to equalize their headquarters resources with their regions.

We were able to get insight into the complicated results of the election.  Nothing was quite as it appeared.  The rumor of 1.5 million new registrants was “fake news,” he told us.  A number of candidates could still be disqualified, even if appearing to lead in the polls.  It was as possible that some charged would flee the country, rather than take their seats even if they won.

Our heads were spinning as we tried to absorb all we were hearing.  Our fingers were flying as we tried to make notes of all of the information.  We were clear as well that iWatch was absolutely central to the forces protecting democracy.  They were under attack, but they were hunkering down to be able to survive and build for the next steps.

You watch, we watch, we all watch iWatch to see what happens next in Tunisia.