Tunis       We are so lucky to be able to come together and visit organizers, activists, leaders, and others who are trying to build organizations and navigate the challenges of empowering people in different countries.  The Organizers’ Forum is close to completing our eighteenth journey, this time in Tunisia.  In the middle of it, the merry-go-round seems endless and exhausting, so I’m going to share a slice of it with you, but I never forget just how amazing it is to share in the experience, regardless of the hurdles.

We have steadily faced the communications challenges of a population wildly fluent in Arabic and frequently French, but less so English.  Confusion often reins.  It started early.  One message said meet at 9 and another at 10.  One said, meet at an unknown address and then go to their office.  At 8:30 AM, Eloise Maulet, ACORN’s person in Africa based in Doula, Cameroon and Grenoble, France, sat with me in the lobby and called our contact in French.  10 was the time, and we were to meet in front of a hotel and be led there.

This meeting was with the newly formed federation of 8000 call-center and telecom workers in UGTT, part of the larger federation.  We met in their new offices.  They were as excited about the meeting as we were, filling up the room with fourteen to our dozen from the Forum.  We ended up finding common cause in our issues with BellCanada, ours having to do with ACORN Canada’s Internet for All campaign and the company’s resistance, and theirs having to do with problems with their subcontractor.  We’ll figure something out together, which is a win!

We then rushed for the only meeting time available a cab ride away in the headquarters of Nadha, a sometimes-ruling party and a force even before the revolution, whose candidate for president had come in third only days before.  We met the campaign manager who was also their research director.  No translation needed here, he spoke flawless English after 18 years as a professor in the USA and UK.  Nadha was proud to have placed first among what it called the “classic” parties, since neither of the top two winners had any party affiliation or normal campaigns at all.  Their support for democracy and its institutions was a constant message point, but the underlying theme was unmistakable:  they had been in government and knew how to govern, and that was essential now in dealing with the economic crisis.  It was impossible not to be impressed, even though the message was a mixture of supports for the poor, taxes on informal workers, and neoliberalism for corporate interests.

We then hurried back for our meeting with two different student unions, who were rumored not to get along too well as competitors.  We were supposed to meet someone in front of a café at 130 PM who would walk us to the meeting at 2 PM.  Our second meeting was scheduled for the same café at 430pm.  2PM came and went.  No one there.  Finally, we found the student leader, but not our guide, on the steps between our main group and our scouts outside.  We sat down, and contrary to all of our preparations, he did not speak French that our colleague, David Tozzo from ACORN Italy, was prepared to translate, but only Arabic.  Further delays until past 230PM, when the original guide showed up, who could translate, but instead mainly spoke himself in French.  Well enough.  He was almost as smooth a politician as the Nahda rep had been.  They had won the vast majority of student votes with their 5000 members.  The other groups had polled less than 2% and were nothing.  They were not solely Islamist and a Nahda youth group but worked with everyone, though they liked some more than others.  They weren’t political, but they were political in encouraging the vote.  Quite an impressive performance in its own way.  Our delegates could choose, was he sincere or had we been spun like a top?

The second group was a no-show, and we abandoned the wait after forty minutes.  It turned out our guide who had dissed them was also supposedly the contact connecting them to us.  Maybe we had been both spun and submarined?  Life in the city!

We survived well over spaghetti Bolognese for some and steak for others in a loud restaurant near our lodging, populated mainly by large men, where the food was excellent, and we could marvel at the fact that smoking was still allowed here in Tunis.

All in one long day in Tunis! 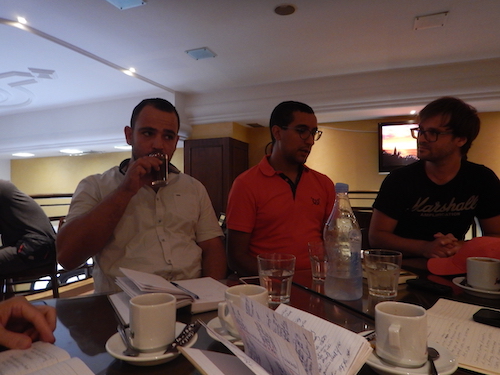 Please enjoy Everyone Hides by Wilco.

Tunis     The Organizer’s Forum delegation, coming from Canada, the United States, Italy, France, Kenya, and Cameroon, began the morning, appropriately, with a briefing on the developments in Tunisia since the Arab Spring.  A large Organizers’ Forum delegation had visited Egypt within the first year of the revolution, but we were disappointed to see the revolution slipping through the peoples’ fingers, so now we had open ears and skeptical minds, filled with hope.

The leaders of the Jasmine Foundation began our day with a briefing that was outstanding in providing context for these developments.  The co-founders, Dr. Tasnim Chirchi, and Intissar Kheriji, who are also our partners in building community organizations in Tunisia, gave us an encouraging through frank appraisal.

After so many years of watching the contentious interpretations of the Constitution in the United States, it was almost exhilarating to hear our colleagues report on the process of writing the constitution in Tunisia.   Reacting to the fall of the dictatorship there was huge emphasis on participatory democracy and weighing the voices of all sectors of the society, including the rural areas of the country that had triggered the revolution, but were often marginalized in practice.  The commitment to inclusion was carried out as well in insistence of equal representation of women for example in the Parliament.

Devolution was critical to the process since until 2011 so much of government under the dictatorship was strictly top-down from the central government.  The constitution gave new powers to local municipalities and opened the way to municipal elections for the first time.  Similarly, where there had been one party rule for so long, the new constitution also created an internal checks-and-balance system that prevented any one party from dominating the parliament, essentially forcing there to be coalition governments.  The first legislative elections were dominated by an Islamic party, but they were moderated in coalition.  The second was won by a more progressive party, but they also were forced into a coalition.

We could see some of the impacts of these changes on the streets of Tunis.  The first night we arrived the debates were being televised on a huge screen along the central boulevard at full volume.  Our friends reported that more than three million watched the debates.  There are twenty-six candidates for the office despite the fact that it is less powerful that the prime minister, and those had been winnowed from an initial list of ninety-eight.  There are many differences of opinion expressed, including some that openly campaign for a rollback of the Revolution so that things could be as they are.  Our speakers argued that was an example of the openness in society now, because even the reactionaries were forced to declare themselves in public.

Of course, they noted that implementation was not as robust as the process of writing the constitution post-revolution.  As always, there is much work to be done, but nongovernmental organizations have soared to 25,000 in the wake of the revolution from only a couple of hundred before 2011, so there are plenty of organizations playing the role of watchdog.

We’re crossing our fingers and rooting for all of the warriors for democracy!