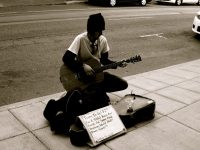 Milan  In recent years, I’ve found it harder and harder to reduce travel.  In fact, the trendline has been moving in the other direction, closer to 60% rather than the higher half-and-half, I’ve learned to live with.  Luckily, I’ve finally cajoled mi companera to travel and work with me more, so I’ve been able to cheat and keep my finger on the 50-50 scale.

I know it’s not something that just confronts organizers though, because as a radio station manger in a couple of locations and the email-answering proprietor of the Fair Grinds Coffeehouses in New Orleans, I am besieged on a daily basis by musicians.  Their promoters are relentless, but easy to ignore.  The musicians themselves, who are trying to break into radio play or land a gig on a tour to get their music heard, are heartbreakers though.  Many of them are trying to get some ears on a new song or album.  You can read in the strain of their sentences the hope and desire that is almost palpable.

When they want to play at Fair Grinds, they offer to put together a bill with other groups and make a claim of friends in the area and their ability to draw a crowd.  It took me a while, but I have a standard message, the email equivalent of a form letter, that I’ve developed over the last eight years, saying essentially, sure, glad to have you, look at our calendar and tell us what’s good, but it’s all busking and selling your swag, because we’re an old school coffeehouse, and we don’t pay.  My message evolved over the years from the euphemistic to the blunt about the money, because I know they are desperate to cover their costs or make a bit, but as a social enterprise, so are we.  Some would continue to plead, asking if I was sure or did I really mean that we would pay, or at least provide free food and drink.  It hurt to say no, but that was the only answer we could afford as well.  Radio is no different, except that I hear from even more aspiring musicians, desperate to build an audience, no matter the genre.  All of them attach links to Bandcamp or SoundCloud or send mp3s.  They all are begging for a helping hand or a bit of luck.  You want to help them all, but there’s no way to do so.

Reading Rockonomics: A Backstage Tour of What the Music Industry Can Teach Us About Economics and Life by the late economics rock star, Alan Krueger, confirmed all of my worst fears.  Only two of ten albums breakeven.  Musicians make almost all of their money on the road, if they make money at all since the average wage is hardly $20,000 a year for professionals.  The top 50 superstars make 85% or so of the money in a small industry with a limited market.

Krueger postulates the same for books, and as the publisher of Social Policy Press, I had come to the same sorry conclusion.  Unless the authors, whether me or others, are willing to go hard on the road to pump the books, they won’t get sold, and if they don’t get sold, they don’t get read.  Heavy on the road with Nuts and Bolts:  The ACORN Fundamentals of Organizing, it went to a second printing.  No one on the road with Campaigns:  Lessons from the Field last year, a great book has still not broken even.  We published Ken Reardon’s new book, Building Bridges:  Community and University Partnerships in East St. Louis, this week, but only after I bargained him on the road to hawk the book before we agreed to publish.  As an organizer, I’m used to figuring the numbers, and I think it takes something like fifty, yes, 50, events by an author or authors to get the book out far and wide enough to have an impact and of course to breakeven.

It’s not all rock and roll, it’s organizing, and once you start, take it from me, there seems no way to get off the road if you want to make it work.

Please enjoy Willie Nelson’s Have You Seen the Rain? New Orleans Steve Early is a organizer, lawyer, journalist, and without question longtime labor activist in the best, classic sense of the word, which also means he can be a royal pain in the butt to bosses and colleagues alike, a tireless advocate, and one-man jihadist on something he feels strongly about like SEIU and Andy Stern. Over the last couple of years though I’ve found him to be a very decent and generous guy, so though we don’t see eye to eye on many things, I’ve come to respect and admire his relentless pursuits even when quixotic and somewhat inexplicable to me. I joked opening a panel the other day named after his most recent book, The Civil Wars in U.S. Labor: Birth of a New Workers’ Movement or Death Throes of the Old? that I thought sometimes he invited me to such events because I was the only person with a connection to SEIU who would talk to him, which of course isn’t true, since he’s a magnet for any dissident or unhappy former SEIU soul.

The panel itself was fascinating. The room was packed and Early was committed to letting everyone have their say, and largely let them do so evenhandedly and without argument. It was how I would have imagined a session on some kind of group organizational therapy. The assembled folks who were long time and dedicated labor educators meeting in New Orleans with the United Association of Labor Educators were universally clear on only one thing: they did not like conflict! They differed sometimes on whether it was a good or bad thing, but there was high consensus that they felt torn between sides, too often forced to choose when they just wanted to serve the labor movement, and frustrated that they could not find either safe space for their own programs or common ground between the combatants. They had chosen the bridge between unions and the academy looking to walk on higher ground and have a good vantage point and all of a sudden they felt way too close to the action.
END_OF_DOCUMENT_TOKEN_TO_BE_REPLACED