Quebec City    After a day of training and reports, the ACORN Canada organizing staff really got serious when the Year End / Year Begin meeting began no holds barred wrestling with campaigns.  The discussion was particularly intense around the dual crises of affordable housing, beyond the reach of many members, especially in the urban centers, and displacement of these same tenant families in these red-hot markets that have been well publicized in Toronto and Vancouver, but are equally problematic in Ottawa, Hamilton and other cities.

The platform for the discussion was the breakthrough victories in the western cities of Burnaby and New Westminster, abutting Vancouver.  As Vancouver has become increasingly unaffordable and the playground of the rich and foreign investors pushing prices past seven figures, pressure on prices and housing stock has led to speculation and displacement that we have termed “demovictions,” when tenants are evicted so that landlords and developers can demolish these three-story, ten apartment units to erect huge, towering apartment and condo towers.  In previous years’ meetings, the decade long campaign that had finally succeeded in winning landlord licensing and inspections with real penalties in Toronto had been the centerpiece topic.  ACORN groups in Ottawa and Hamilton had carried that campaign forward in those cities.  Now the debate centered on how to nationalize the victories in the west across Canada.

The victory in Burnaby had been long in coming as well, but was sweeping.  ACORN’s campaign and leaders had moved the city council to pass arguably the strongest tenant protections around displacement in North America.  When a qualifying building is scheduled for demolition and redevelopment under the new bylaw, the displaced tenants would be given a monthly rent top-off from the time they are moved out of their old unit, until they are moved back into the unit.  The rent supplement would be the area median rent plus 30%.  In 2019, that calculated to $1820 for a two-bedroom or $1545 for a one-bedroom, assuring the tenant of being able to successfully find alternative housing.  The real kicker is that once the redevelopment is completed, the tenant has the right to return to her old apartment at the same rent as when they left, coupling the scourge of displacement with what is effectively rent control.

This is great public policy.  The city doesn’t lose any affordable housing nor are tenants permanently displaced, even tough temporarily inconvenienced, the city gains more housing units, and despite all of their whining the developers make their money back and more from the new apartments they are adding.

Will it still lead to gentrification?  Yes, to some degree, since the new units, either rented or sold, will undoubtedly absorb the costs of the relocation and the retained affordable units.  Rents on those units will rise with inflation a couple of points per year, but low-and-moderate income families trying to move to Burnaby will be forced farther out to find affordable housing.  The only solution for that problem is the one that cities, provincial and national governments in Canada and around the world are still avoiding:  building more public housing.  The national housing policy envisions a rent subsidy for 300,000 families of up to $2500 per year, but that’s another story.

Nonetheless, ACORN Canada is clear.  This is what works.  Time to make the demands nationally, city to city, province to province.  These victories are benchmarks, so the stalling and excuses from city staffers and electeds won’t wash anymore.  There is a program that is winning, and a plan to make it work everywhere. 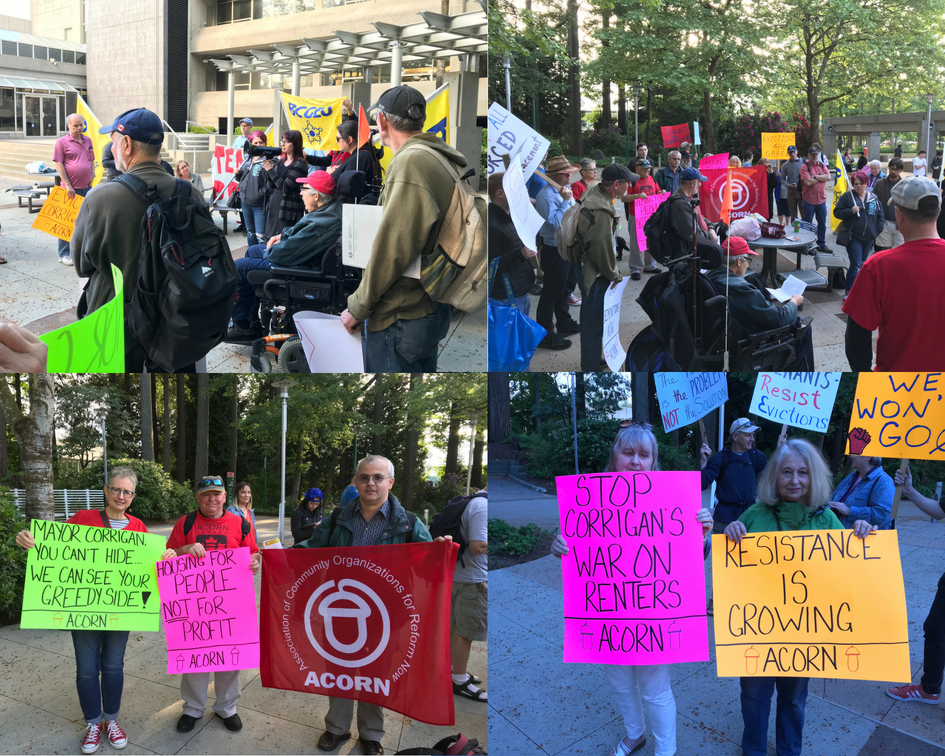