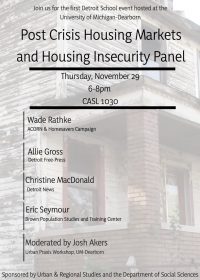 Detroit    The panel organized by the Detroit School at the University of Michigan – Dearborn had an ominous title: “Post Crisis Housing Markets and Housing Insecurity.”  In Detroit, not unlike so many other cities around the world now, when you couple “Post Crisis” and “Housing” in the same phrase you are definitely either very hopeful or asking for trouble.  The housing crisis in Detroit as been horrid for half-a-century at the least, so post-crisis referred to the 2008 national meltdown of course.

The crowd on a miserable winter night in Detroit, which is to say, a normal winter night in Detroit, was deeply informed and hugely engaged.  The panel was authoritative.  Christine Macdonald of The Detroit News and Allison Gross of the Free Press had both deeply reported on housing issues, were well versed and knew the players on all sides of the field.  Professor Josh Akers from UM-Dearborn and his colleague Eric Seymour, a PhD now at Brown, had deeply researched the housing market and the level of insecurity for families.  Both had been wildly helpful to the ACORN Home Savers Campaign in getting a handle on companies operating in the margins with sometimes questionable and often predatory products often contributing to housing insecurity.

Professor Akers, as the moderator, gave the background and the numbers of foreclosures, the impact of subprime lending, and the level of continued abandonment were unsettling, no matter how often I had heard them.  The reporters unpacked the impact of recent programs like the “right of first refusal” which allowed the city to pick up homes in foreclosure and potentially offer them back to families at real or current market value, rather than the pre-2008 recession levels.  They shared the problems they faced in keeping these stories flowing in the exhaustion of their editors, and perhaps the public, felt in facing this continual train wreck.  Eric Seymour filled in the gaps that both he and Akers had worked on to supply both reporters and ACORN with the raw data to fuel their reporting and our work.

As Greg Markus, a retired professor and key organizer with Detroit Action Commonwealth, pointed out in the question & answer after the panel, the twin crises of mortgage foreclosures from the banks and tax sales triggered by the government had deepened the crisis in Detroit.  He argued as well that the ACLU suit that upbraided the city for not allowing low income families to take advantage of the tax exemptions that has now slowed the auctions as well as the work being done by reporters, scholars, activists, and community organizations showed real progress moving forward.  Christine Macdonald nodded but pushed back that none of these things repaired the damage to families who had already lost and been ejected from their homes or the permanent scars it created in the neighborhoods.

It was an excellent conversation without real joy.  There is great work happening in Detroit, but too much of the effort for too many decades has been Sisyphisian with the rocks almost getting to the top of the hill, then pushed back down again.  I mentioned a memorandum I had stumbled on in the ACORN archives from 2003 from the Detroit ACORN office on a collaboration with the City and its financing to allow families to rehab houses and then waive taxes and purchase requirements.  Then the numbers of houses abandoned was 30,000.  Now, the land bank alone has perhaps 80,000.

This is where the fight has to be joined, but whether a model for the future that would assure housing stability can be found without a radical rethinking that puts families and not realty interests and developers first is still very much in doubt.