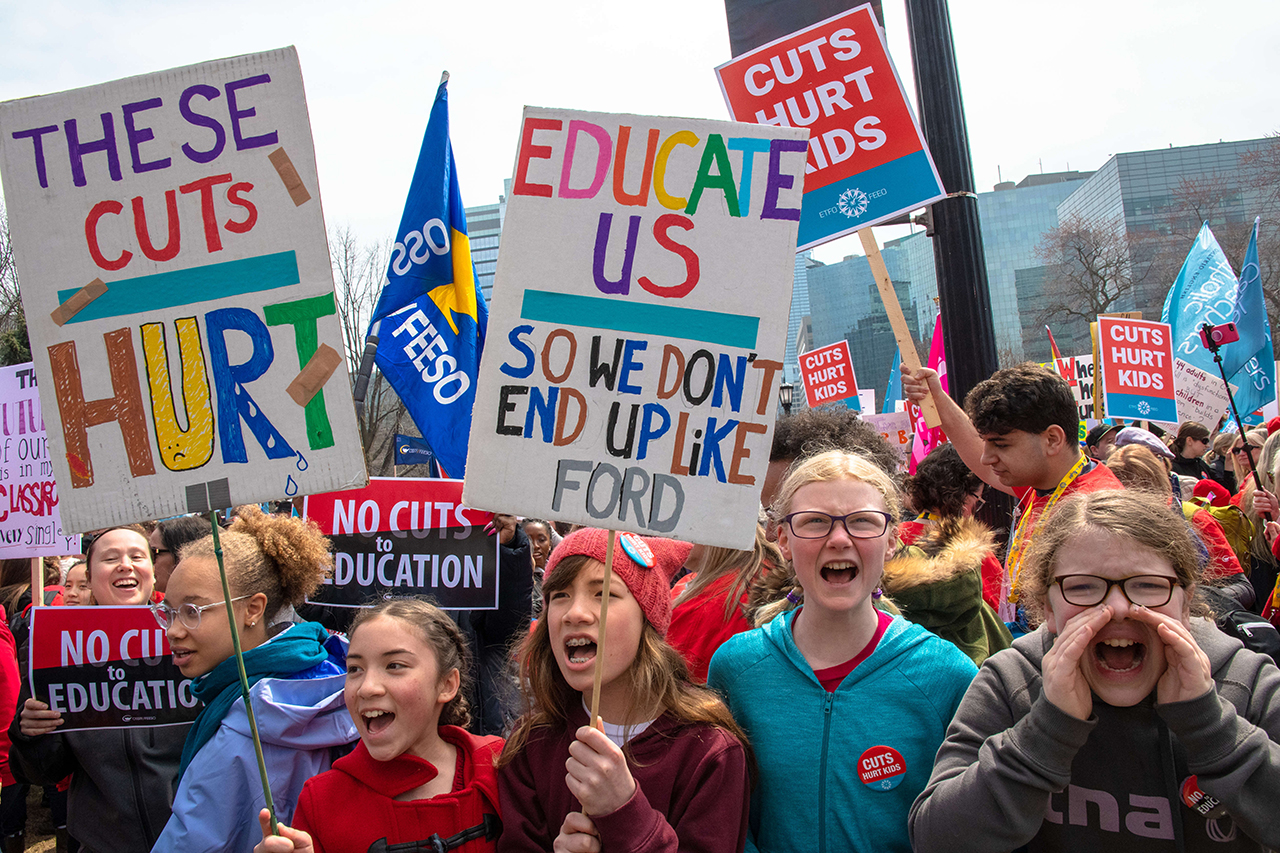 Toronto    When last I visited Canada and met with leaders and organizers of ACORN Canada everyone was still reeling at the horror of Doug Ford becoming premier of Ontario, the economic and political core of the country.  Ford was a well-known commodity having been a Toronto city councilor and the right-hand of his brother Rob Ford when he served as a controversial mayor of the city.  The argument then was whether there could be such a thing as a Canadian Donald Trump.  Yes, Ford would be bad, but was it even possible for him to be that bad?

Now almost six months later the answer seems to be, yes, it’s very possible.  Different of course, but horrible in its own way.  Like Trump, or maybe even better than Trump, he’s getting away with a lot of it.

For example, in a pure political power play he was successfully able to cut the number of seats in the Toronto council in half, eviscerating many of his enemies and settling scores in such an effective way that Trump would have been envious to achieve.  In the Canadian version of culture wars, one of his opening gambits was to slice the funding in public schools for sex education.  Not sure who that helps in his base, but it’s more like a dog bark than a whistle.   In another early move he pulled Ontario out of the cap-and-trade program that had been a hallmark of Canada’s climate leadership, claiming he was helping low income and working families.

There’s way more now with less pretense that it might be helping anyone other than business.  The minimum wage increase for Ontario was frozen which no one can pretend helps workers.  He abandoned the funding for retrofits that would have aided lower income families in social housing, so much for them as well.

Now among the $22 billion in cuts to provincial resources one of the most controversial has to do with cuts to health care, long a point of pride in Canada.  In this instance, Ford has proposed cutting the provincial contribution to Toronto’s public health service including to programs that are 100% mandated by the province and where they had been paying 100% of the cost.  At the confluence of math and politics, there’s no agreement of course, but the city is not stepping up to cover the province’s rollback, and the province is trying to argue that it wants to slice it’s share to 50% on programs it had been paying for previously at 100% or 75%.  As one councilor says, people in Toronto will die from this game of chicken.  Other are arguing that Ford is trying to also privatize some parts of Ontario’s public health care.

The beat goes on and on.  Legal aid providing assistance for low income families is being cut by one-third.  Indigenous affairs would be cut by half.  One-billion dollars will be cut from the Ministry of Social Services, and people are still speculating on which programs will be discontinued or crippled.

Donald Ford or Doug Trump?  You call tails, I’ll call heads.  What’s scary is that Ford, having some experience in government, may be able to get away with more of his shenanigans that Trump will.  Either way, there’s little good news coming from Queen’s Park for Canadians living in Ontario, so keep that in mind before any of you threaten to move to Canada if Trump wins again in 2020. Sandy Lake, Ontario       Finally at the end of the day with the dinner bell ahead of the ACORN Canada staff at the management and new staff training, Judy Duncan, the head organizer, directed all of us to the next item: “Ontario campaigns ‘fight back’ – what is possible?”  Here we were almost two years after the Trump upset and triumph in the US, where we are still reeling every day, and I was suddenly listening to déjà vu all over again, as the Canadian crew detailed the shellshock of a new conservative premier, Doug Ford, coming to power and sweeping away what the Liberals and the New Democratic Party (NDP) had cobbled together in recent years.  Too many times it sounded like Doug Ford wanted to be called Donald north of the border.

Sure, there were some warnings.  The post-election reports had forecast that he would try to figure out a way to scale back to smaller government and claim to be looking at the books.  The rising cost of electricity or hydro, as it is called here, had been a tone-deaf and witless move by the former premier, so heads had to fall and few would fault him.  On the other hand, rewriting sex education in the schools and trying to pull back from cap-and-trade carbon arrangements to protect the climate, seemed almost un-Canadian for the tolerant and forward thinking country in the north.

But, then the deluge.  Now, it appears the steady movement to $15 per hour minimum wage in Ontario is likely dead-on-arrival.  Pulling back on cap-and-trade didn’t have a ripple effect, but was a tsunami washing over lower income families that ACORN represented.  Several hundred million had been committed in retrofits for social housing.  Gone.  One organizer told about a playground project at a local school where parents and others had raised money years that was scheduled to finally be built this fall that was suddenly scrapped when the money from cap-and-trade coming from the provincial government to support school projects was also gone.

Then there were more surprises coming from right field.  The day before police review legislation was to go into effect, he had it suspended.  He wanted to cut the size of the Toronto city council suddenly which was something never mentioned during his campaign.  Ford shelved laws passed to restrict vaping, which even the Trump administration is moving to curtail among young people.  He pushed back laws that would have cracked down on ticket scalping.  What the frick?!?

Taking another tragic page from the Trump playbook he also embraced racism.  He scrapped a separate minister for indigenous affairs and of course kicked the hornets’ nest there.  Amazingly, he appointed a cabinet of mostly white men.  Who does that?  I mean aside from Donald Trump.

You get the message, right?  For all the folks who claimed in 2016, that they were thinking about going to Canada to escape the Trump regime, think again if your GPS is set for Ontario.  No matter the talk about NAFTA and Canada, the “wall” is going down between Trump’s America and Ford’s Canada, and it’s going to be as ugly in that part of the north, as it is in the south, just on a slight time delay.