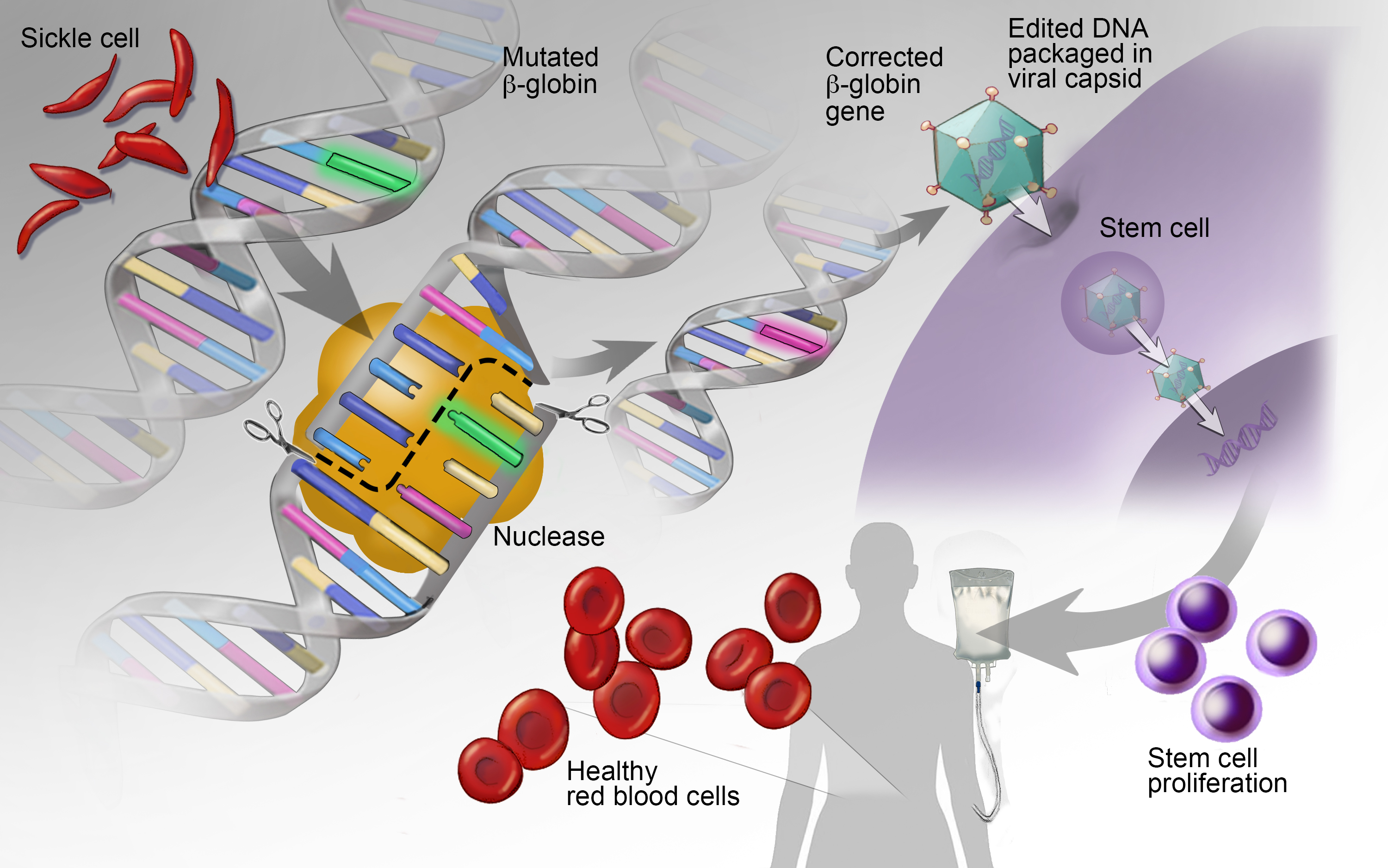 New Orleans       Gene therapy is both the wave of the future and a huge ethical quandary of almost unimaginable complexity.  A young Chinese doctor, who attracted international publicity by becoming the first to perform gene therapy in the womb on a set of twins to potentially provide immunity to a disease to which they were genetically susceptible, is now facing sanctions and legal problems as the Chinese government reacts to protests from virtually all quarters.  There are debates that surround all of these issues.  Will the rich be allowed to pay to have “perfect” babies?  Will genetic tests be allowed for all and therapies provided for genetic diseases from in utero forward?  The questions are thorny and endless at this point, especially since so few outside of the medical field have a firm grasp of the potential and the current state of play.

It was exciting to read an article in Scientific American that focused on the devastating sickle-cell disease and quoted researchers and doctors arguing that, “Gene therapy might offer a cure for sickle-cell disease, and clinical trials are already underway.”  Wow!  Anyone who has worked in lower income communities heavily populated by minorities, both in the US and globally, knows people well who have suffered – and died – from this disease.  No one is immune.  I first learned of this disease at twenty years old from an early president of Massachusetts Welfare Rights Organization’s son who was afflicted.   Later, I was close at hand when the grandchild of the president of our union local in Louisiana, and the daughter of one of ACORN organizers and leaders in New Orleans, were afflicted and endured constant crises.  One was fortunate enough to have a bone marrow transplant, which is about the only current cure, but gene therapy could help many more victims of the disease since it would rely on stem-cells from the individual rather than a donor.  Because the therapy involves only essentially one gene, a cure is fully realizable, everything being equal.

Unfortunately, nothing is equal, leading one doctor to be quoted saying “sickle-cell disease represents the best and worst of health care in the United States.”  The disease itself is ghettoized, making demographics destiny in a deadly way.  One expert “estimates that at least 30% of his adult patients with sickle-cell disease die from preventable causes…but the lack of infrastructure, such as care centers” leaves gaps in monitoring and treatment with fatal consequences.  The hope of gene therapy for sickle-cell is then deflated by concerns that the infrastructure that doesn’t exist now, would also not exist in the future to achieve the cure.

And, then there’s the cost.  Experts estimate that gene therapy would run from $500,000 to $700,000 over a couple of years.  It would save money over time, but obviously the costs would come on the frontend in achieving the cure.  It is also a huge public policy problem because 50% of the patients in the US being treated for sickle-cell are covered by Medicare or Medicaid.  As one doctor says, the problem is “money and ethnicity.”

The Center for Disease Control estimates that 100,000 Americans suffer from sickle-cell.  In urban communities where many of us work, we know the pain is permanent, and then there is death.  Increasingly, we are also going to know that there is a pathway to a cure here that could upend a tragic inheritance now and in the future.

There needs to be equity and justice in healthcare,  just as we demand it everywhere else.

New Orleans  In a sordid and shameful episode a few weeks ago Arkansas Governor Asa Hutchinson pridefully announced that the state had managed to bar 4300 people from health care support through Medicaid because of its new work requirement policies.  Seema Verma the head of the federal Center for Medical Services (CMS) who had approved this draconian attack on the poor played clueless cheerleader.

As more information come forward the real evil that underlies this shame emerges.  Let’s look at the facts.

Arkansas began the experiment by exempting two-thirds of the eligible recipients from having to report work hours, knowing this was going to be a problem.  30,000 people were then required to report.  16,000 didn’t report any qualifying activities to the state, either work, training or volunteer time.  In fact, according to the New York Times, “only 1200 about 2% of those eligible for the requirement, told the state they had done enough of the required activities in August, according to state figures.”  That’s pickle-poor!  It screams to a state failure not a people failure, and it foretells thousands more that will be denied coverage.

State officials tried to cover their rear ends, claiming they had done everything possible:  mailings, calls, and even putting out fliers some places where Medicaid patients congregate.  Even more ridiculously they touted the fact that they send emails and posted on social media sites.  Who are they trying to fool?  Arkansas ranks 48th among all of the states in the US in terms of connectivity and 30% of the population is underserved.  230,000 people in Arkansas don’t have any wired internet providers available where they live.  Who wants to guess whether embedded in these sorry statistics lie most of these lower income Medicaid recipients?

Shockingly, the Times then quoted Amy Webb, the chief communications and engagement officer for the Arkansas Department of Human Services saying, “If there’s something we are not doing to reach people, if someone will tell us how to do that, we will do it.”  Yeah, really?  She doesn’t mention that the state legislature forbade any use of media to increase enrollment under the Affordable Care Act.  Nowhere do they claim they were on the television or radio airwaves.  As the manager of KABF, a 100,000-watt noncommercial smack dab in the middle of the state with more than 50,000 listeners per week, more than half of them lower income, I can absolutely tell you we never received a public service announcement from them, much less any support for a real information promotion of the program.

Every other indication is one of abysmal failure.  The state conceded even when they had email address, only 20 to 30% opened the email.  Call centers said many didn’t answer their phones.  A professor from New York visited three counties in August and interviewed 18 people and 12 were unaware that work requirements even existed.  Other experts noted that an incentive system, even a punitive one trying to get more people into the workforce, won’t work if people don’t know about it.  Duh!

Adding injury to injury, all of the work hours are required to be submitted through the internet.  That’s the same internet thing that hundreds of thousands of Arkansans are not able to access, and even with access are not necessarily all-pro at using the state’s clunky website.

State officials in Arkansas need to start some truth telling.  These so-called work requirements are nothing of the kind.  This a pure and simple way to push eligible people off of Medicaid.  Hopefully a coming court hearing will stop this hypocrisy.

In the meantime, this is a scandal that none of us should be able to stomach.