New York City       As people look at the year gone by and a decade coming to an end there are a barrage of lists with of best movies, books, songs, plays, TV shows, and on and on.  One indelible memory of this time has to be the detention of children on the southern border of the United States coupled with the recurring reports of lost children.  Children that the U.S. government could neither find, not admit that they had lost, leading to constant revisions of the numbers and contention over literally thousands of lost children.  The national and international shame and scandal continues as regular reports come from the border of miserable conditions, food shortages, sanitation problems, lack of health care and schooling, and more.  We’re just talking about conditions in the US.  Some 40,000 migrants are held or camped in squalid conditions near the border from Matamoros to Juarez, Mexico, waiting for asylum appeals to be heard in the US.

Worse, these are better stories than the ones of lost children sent in solitude at great expense by their loved ones to join their families in the US either on the train through Mexico called “the beast” or with various coyotes.  Some make it.  Some are caught and placed in detention or warehoused to be deported home.  Others are lost somewhere in the Sonoran Desert or along the route or worse.  What a horror!

I read two books by Valeria Luiselli this year, one fiction and one nonfiction:  The Lost Children Archive and Tell Me How It Ends:  An Essay in Forty Questions.  Both books are obsessed with the plight of lost children as fiction and nonfiction blend together in mutual horror.  The essay is the novelist’s efforts at advocacy.  Not surprisingly, the novel is even more powerful at achieving that purpose as the protagonist, a mother of two, goes to search for two lost children, and her own children become lost as they begin the search themselves.  The Lost Children Archive thankfully makes some of the top ten lists of books for this year, so hopefully its power becomes persuasive or at least keeps the issue somewhere on the list of daily horrors.

These are global issues.  In New York City we walked from the financial district to Chinatown to finally find the small lettering on a nondescript door saying 47 Canal, though it was not on Canal Street.  There we watched a short film by Cici Wu called “Unfinished Return of Yu Man Hon,” that focuses on another lost child, an autistic boy of nine, who wandered across Hong Kong’s border into mainland China in 2000, and was never heard from again.  The film tries to imagine him wandering in a netherworld between reality and imagination.  Hong Kong is now a surveillance city, as we all know, and was pretty far along that path then.  Was Yu Man Hon just another rounding error in the great global population where life’s purchase is cheap?  Was there an effort to find him that failed, or was he simply swallowed up, unseen and unheard?

The Hong Kong story is a tragedy of one boy and his family.  The story on the southern border dealing with tens of thousands of migrants from Central America is the story of thousands of lost children and tragedies multiplied many fold.  Worse, no one is looking.  Few seem to care.  Governments look the other way, creating indelible stains on all of these countries where the faces of lost children can never be erased.

Heerlen        In the evening thirty party activists assembled at headquarters for the evening’s program.  The introduction was straightforward.  Ron Meyer, chairman of the Socialist Party of the Netherlands, made some remarks, as we sat in the front of the room on high chairs.  I expressed my pleasure and honor at being with them and noted the progress since my visits three years ago.

All well and good.  A thousand meetings have begun and ended exactly this way.  Nothing out of the ordinary.

Then we moved to the back of the room with the others as three activists, one after another, presented a description of the campaigns they were pursing and specific questions they had and were hoping for feedback from me and others.

The first chapter had gotten involved in trying to organize migrant workers, largely Polish.  The agenda was unclear, but the commitment was deep, and the issues profound.  I ended up steering the conversation towards worker centers, and stumbled on the fact, unknown to me despite my earlier experiences, that they ran “service centers” of sorts in perhaps fifty of their 125 or more chapters around the country.  We talked about ACORN Service Centers and an intake model.  We talked about our friends and colleagues at CASA de Maryland.

It became obvious that this was going to be a different political meeting than I had ever attended.

The next campaign had started on one block in a lower income set of housing blocks where 30,000 lived.  After door knocking the issue was clear.  Rats had taken over the units. They swarmed the common garden plot.  They scurried across kitchen floors.  They achieved some success, but quickly realized that the rats simply moved from the block they had organized to the next blocks.  Wrap your mind around this.  They were talking about a rat infestation in the Hague of all places.  The country’s Parliament and seats of government are at the Hague.  All the huge international NGOs have their headquarters in the Hague.  The place is as infested by think tanks, embassies, and the like as it is with rats…well, not quite it turned out, there are even more rats!  I don’t even need to start listing the creative and effective tactics that started flying around the room.  This was a winner.

The final campaign presentation was equally to the heart of classic ACORN community organizing:  building tenant unions in social housing.  I had been hearing about mold all day, and now we were fighting for renovation of the units.  Suddenly, the young man mentioned a division among the campaigners because some were getting 5000 euros of relocation money during the rehab and others were not.  I quickly asked, was this an entitlement?  Yes, was the answer.  Was it a matter of national law or regulation or only in the community under discussion?  Yes, national.  Boom, we were talking then about minimum standards and direct benefit campaigns.  Such a thrill.  What fun?!?

I shouldn’t have been surprised.  I had spent five hours with the organizing team earlier in the day.  They had described the adaptation they had made to the basic ACORN organizing model for the purposes of their campaign organization.  They called it the “storm” and there were four phases, beginning with door knocking and outreach and culminating in actions and victory.  Not all of the dots were joined together perfectly, but they had put a significant number of chapters into motion with multiple campaign capacity.

They were doing this work outside of the standard party-based electoral obsession.  They were building a broader base, if they could take the next steps to link these nascent organizations more closely to the party, sort out how structure and membership that might work, and redefine what they meant in describing the SP/N as a different kind of political party, they would have something unique.  Indeed, they would be building something as powerful as rare.  The potential seems endless, if they can continue along this path.  Exciting stuff! 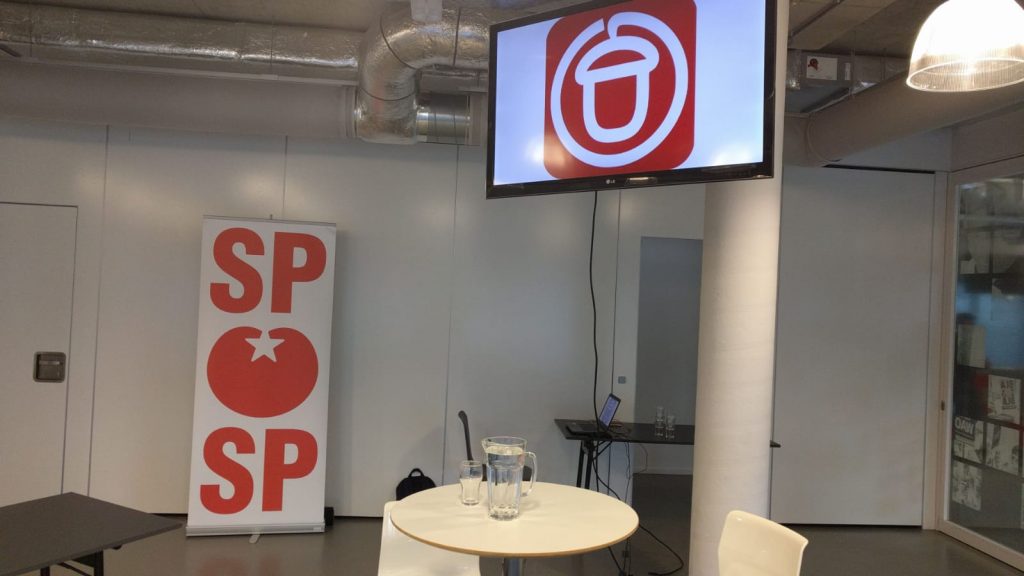