Greenville        New York City added a right to legal counsel for tenants facing eviction.  It made a difference with the city’s eviction rate falling from almost 29000 in 2013 to only a bit over 18000 in last year.  Nationally, it is likely that more than 2.5 million evictions are filed for tenants annually now, perhaps the numbers are even larger.  It didn’t solve anything, but it put a stopper in the problem.

Nothing new there, but here’s a real head scratcher.  Two sets of economists, as reported in The Economist, studied the impact of evictions on the poor, one in Chicago and the other in New York City.  Their conclusion:  the poor were poor before they were evicted, and darned if they aren’t still poor after they were evicted.  Their underwhelming conclusion on both cases was essentially that they were a bit poorer, but not all that much.  What are we to do with information?  Is there anyone anywhere in the world that thought that evictions were a poverty-reduction strategy?  This is when you have to wonder what economists do with their time and why?

The group that looked at New York said there was also no spike in payment of increased food stamps or welfare benefits.  Read the papers, fellas!  It’s almost impossible to get welfare now, no matter where you live, and food stamps are moving that way as well.  For welfare, you almost always need a physical address, so remember that when you were study evictions.  This group did note that use of hospitalization and homelessness increased dramatically and, being economists, couldn’t sidestep the fact that evictions were triggered by less than $2000 in back rent, but it cost the city $41,000 per homeless person annually.

This is all shuffling paper in a hurricane.  When I read that a huge trigger for the Hong Kong demonstrations is the lack of affordable housing and high rents, all I can say, is let’s hit the streets here, too.

One demand that would change all of this is not more lawyers – or more economists for godsakes, but making rental assistance like Section 8 an entitlement rather than an NBA lottery pick.  Only 25% of the eligible families actually receive a voucher, leaving 75% in the muck.

Why are the banks and housing industry not lining up with us to demand this?  The amount of new construction that would break ground overnight, if all qualified families received rent support, would jump the entire economy several notches.

There’s no comfort in discovering that the poor were only a bit more desperate by degree after an eviction.  Affordable and decent housing is in fact a poverty reduction winner.  Let’s go all Hong Kong over that! 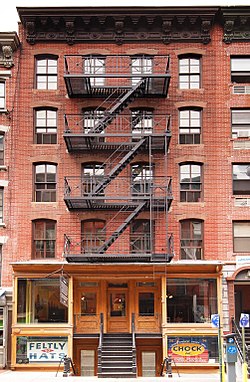 New York City        I always meant to go to see the East Side Tenement Museum every time I visited New York City over the years, but somehow my usual schedule never put me close enough to make the schlep and schedule the visit until now when in the city on a Sunday afternoon.  I’m embarrassed to admit this, because I felt like I had been there almost at the birthing, listening to my friend and colleague Ruth Abram advance this project from a twinkle in her eye to full-blown reality.

My debt to Ruth was always enormous.  In 1974, going to New York for the first time to try to raise money for the fledgling ACORN, Ruth had given me an appointment as the then executive director of the small Norman Foundation.  Midway through our first meeting, she called out to her secretary to bring her an atlas so she could see exactly where Arkansas was located.  In typical Ruth-fashion, not only did she convince Norman step out on the limb to give the first ever foundation grant to ACORN’s c3, the Arkansas Institute for Social Justice, but she also became a one-woman-Pied Piper trying to encourage others to do the same. She took me under wing, even giving me a place to stay with her and her family, first on the Upper East Side and then later in the 1980s in Riverdale, when she and her family with Herb Teitelbaum moved up there.  After our first visit, she had a dinner the next year at her place in order to introduce me to David Hunter and his wife of the Stern Fund, which was a pacemaker for progressive funders at the time.  And, that was the first of several.  At its closing, ACORN had been the largest cumulative grant recipient in Stern’s history.

Ruth could raise money from a rock.  She was Atlanta charming and effervescent and New York smart and fearless when it came to fundraising.  She was inimitable, and taught me more than I ever was able to practice in my own eccentric and conflicted approach to foundations.  She went from Norman to other ventures including a woman’s project at the ACLU.  She was made to be an activist, not a grants maker.  So I wasn’t surprised on one of my spring trips, she explained to me her idea of trying to do the impossible and create a tenement museum to show life on the lower East Side during the time it was a Jewish ghetto.  First, she had to enroll at NYU to take history courses to get deeply grounded, and then it was off to the races.  By 1988, she was opening the East Side Tenement Museum as its key founder, and it has now grown to be a $14 million per year institution and one of the must-see, highly regarded museums in the city focusing on “living” history.

Decidedly, the Tenement Museum is a different sort of experience even 20 years later.  You don’t wander through.  You are led by the hand at about $25 a pop.  No touching, which is easy to understand because the artifacts from the family apartments are fragile.  No photos either, but I’m not sure what the reason for that might be.  We of course went on the sweatshop tour for a touch of labor history and the inspiring call to arms of the Strike of the 20,000 that help lead to the organization of the International Ladies’ Garment Workers’ Union (ILGWU), now subsumed by UNITE-HERE.

Quite a thrill to see what Ruth accomplished here, and to flip through the pages in their small book in their bustling gift shop and see her picture at the lectern in the foreground at the 1988 founding with Mayor Koch, ACORN’s arch nemesis, seated in the background, as he rightly should have been.