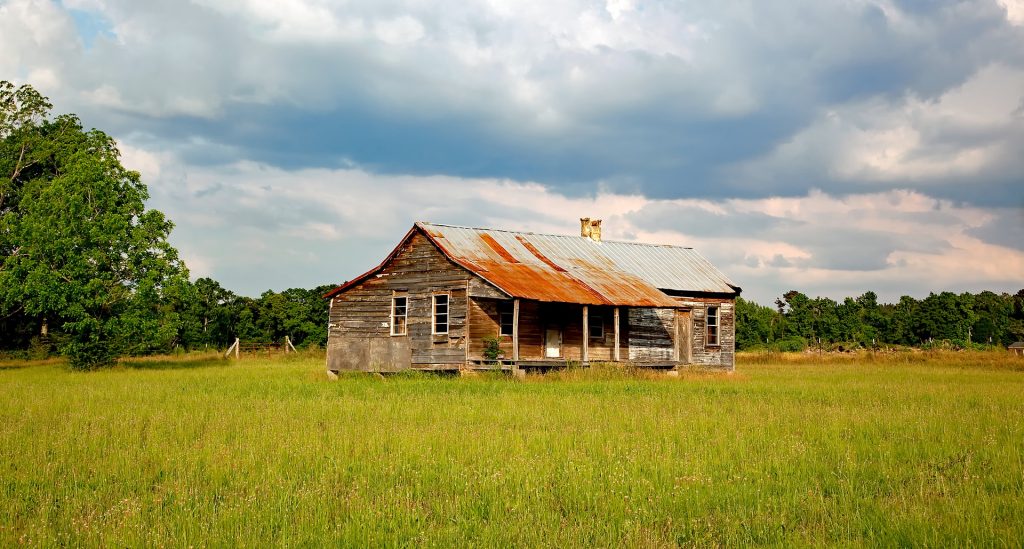 Gulf Shores     I’ve been hearing about the loss of land, particularly farmland, by African-American families, for fifty years.  I knew there was bound to be some fast and loose dealing behind the fact that 90% of black-owned land was lost between 1910 and 1997, but I assumed it was driven by unequal market negotiations and forced largely by economic desperation.  Reading Lizzie Presser’s article, “The Dispossessed:  Why Are So Many Black Families Losing Their Land?” in The New Yorker gave me a clearer picture of the plain and simple skullduggery, cheating, and stealing involved.

It starts with something called “heirs’ property.” Presser explains that in heirs’ property “descendants inherit an interest, like holding stock in a company.”  This form of land inheritance dates back to Reconstruction and Jim Crow eras when African-Americans didn’t have access to the legal system.  The ABA calls it “the worst problem you never heard of.”  The USDA cites it as “the leading cause of Black involuntary land loss.”  Presser notes that that “heirs’ property is estimated to make up more than a third of Southern black-owned land – 3.5 million acres, worth more than twenty-eight billion dollars.”

The heart of the problem of heirs’ property is that it lacks clear title despite many situations in which a deed is gripped firmly in a family member’s hands.  Clearing a title is tricky.  It means tracking down all of the family members.  It involves lawyers generally and there are few that specialize in this area.  It costs money and is complex.  Without clear title the land can’t be used as collateral or qualify for USDA loans for planting or buying livestock.  Or, and this was a punch in my gut, used for disaster relief.  Presser indicates that after Hurricane Katrina in New Orleans in 2005, “twenty-five thousand families who applied for rebuilding grants had heirs’ property.  One Louisiana real-estate attorney estimated that up to a $165 million dollars of recovery funds were never claimed because of title issues.”

The land burglar’s tools in places like North Carolina include something called the Torrens Act.  A family member can claim “adverse possession” and bypass court judgments and courts themselves by making a claim of ownership to a lawyer appointed by the court, who the claimant pays.  There’s only a one-year window to appeal a Torrens determination, and it’s over before many families realize their land has been snookered under their noses. When developers and development is involved, quickly the value of the land can skyrocket from farmland to prime real estate making it hard for many families to pay the property taxes.  Land vultures hover around tax auctions waiting to swoop in and take the land, and usually succeeding.

We’re not through with this litany of horrors masking as legalized theft.  Next in the rogues’ gallery is “partition action.”  As Presser explains, “Speculators can buy off the interest of a single heir, and just one heir or speculator, no matter how minute his share, can force the sale of an entire plot through the courts.”  The practice also dates back to the time of the Civil War.  In research in one county in North Carolina, Presser found that 42% of the partition sales involved black landholders even though the population of the county was only 6% black.  Adding insult to injury, heirs are forced to pay the legal fees of those who bring the partition cases forward.

Eight states in the South have not approved the Uniform Partition of Heirs’ Property Act, including North Carolina, that attempts to reform this practice.  Eleven states still have the Torrens Act on on their books.  Only in 2018 did Congress finally pass an act allowed for USDA loans for heirs’ property if all members of the family agreed.

Meanwhile every day more of the millions of acres are stolen somewhere in the South.  Who says reparations is old Civil War news when so many of the crimes allowed in the aftermath of the war are still being perpetuated in the name of racist laws now? New Orleans   Some professors are reporting that they are changing their minds about the importance of equality to people. They argue that it’s more about access to opportunity than it is about distribution. Six of one, a half-dozen of the other.

Key to their change of mind, reported in the Wall Street Journal, was a survey of 5000 Americans in 2011. The upshot was that those people surveyed thought that in a perfect society, individuals in the top 20% should have more than three times as much money as individuals in the bottom 20%. They also were unaware how unequal society is today, thinking that the bottom 40% had 9% of wealth and the top 20% had 59%, while actual proportions were 0.3% at the bottom and 84% at the top.

Frankly, it was hard for me to follow the argument being made by the profs, at least from the weight being attributed to the survey. To say that people are OK with there being a $3 to $1 difference between the top and the bottom when they believed that there was more than a $6 to $1 divide now, would seem to make the case that in fact people want major advance in equality. Furthermore, when you compare the reality that there the top 20% have 280 times more wealth than the bottom, then narrowing the gap to the richest segment only having three time the wealth of the bottom 20% is almost revolutionary!

It seems to me that from those numbers the desire for more equality is deep and profound. This is the United States, and Americans are not suddenly going to say they believe that everyone should get an absolutely equal piece of the pie with a dollar for me for every dollar for you. This is country proclaiming itself the “land of opportunity.” People want more equality, but they only know how to get there by winning more equality of opportunity, hoping against the evidence and their own life experience that the gap narrows with better breaks and a fairer deal.

In this age of gross inequity and almost total residential segregation of huge wealth from most lower income people, and vice-versa, there is no way people can get their minds wrapped around the fact that people holding onto more than 280 times their wealth are living in the same world or what their world might be like. It makes your head hurt. It strains the brain.

Meanwhile those doing the bidding fluff up the opportunity issue to change the conversation from gross greed at the top to false claims of slovenliness at the bottom. And, they get away with it more often than not, until it comes to taking something away from the bottom, like their healthcare, and then it’s harder to pull off the crime in broad daylight, since it normally happens daily in the high towers and behind the gated walls.

No one should make the mistake that inequality is not a huge issue and a bomb rolling around the street waiting to be exploded.