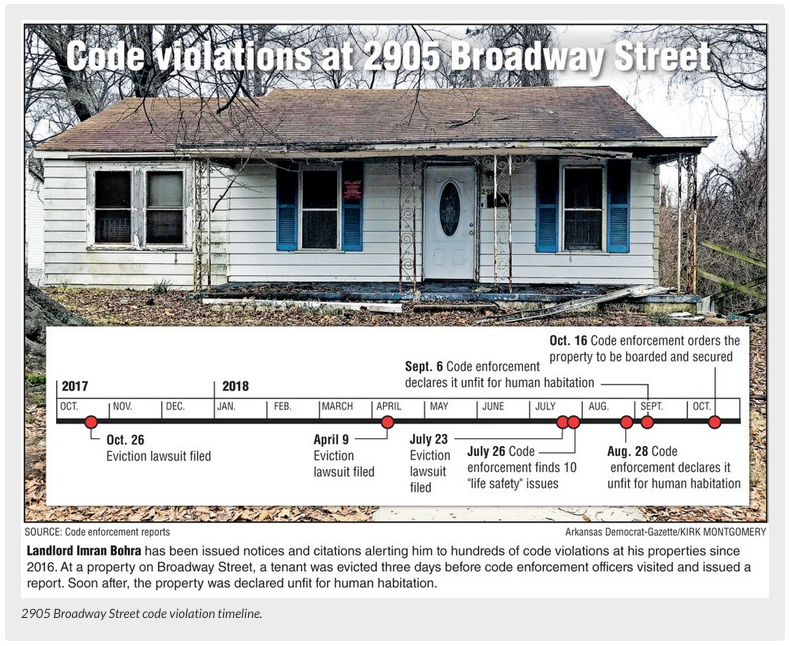 Little Rock       Imran Bohra is not exactly a household name everywhere in Pulaski County, where Little Rock and North Little Rock are located, but among lower income tenants, he’s famous in the worst of ways as a notorious slumlord.  He has about 150 properties that he rents in both cities with perhaps the bulk of them in North Little Rock.  Recently, his latest company, Entropy, and his practices got some much-needed attention after he evicted and seized the possession of Theodore Thompson, a tenant who is also a member of Arkansas Community Organizations (ACO), the former Arkansas ACORN, and their tenant organizing and advocacy project.

Of course, saying he was tenant is kind of a stretch in some ways because he was never given a key to his apartment after Bohra drove him to look at the place and kept his car idling outside while Thompson checked it out.  Supposedly, according to the Arkansas Democrat-Gazette, his property manager was supposed to drop the key by.  Thompson didn’t pay rent without the key and didn’t know where he was even supposed to pay his rent.  Then Thompson found an eviction note affixed to the door and Bohra seized all his belongings in the process, which amazingly is a landlord’s right in Arkansas.

Thompson, ACO, and the rest of us might ask how any of this is possible and how can it be stopped.  As Thompson says, “It’s hard for me to understand how I’m not the first, and if he’s not stopped, I definitely won’t be the last.”

Sadly, this seems to be just business-as-usual for Bohra and from talking to Neil Sealy, head organizer of ACO, many other slumlords in central Arkansas who operate with similar impunity.  Since the beginning of 2016, the newspaper found that Bohra’s properties had been cited for code violations 170 times in Little Rock and North Little Rock.  Many of Bohra’s tenants claim they believe he has no interest in making repairs because a big part of his business model is based on collecting security deposits, first and last month rent, and pyramiding his money based on quick evictions.

All of that is helped by the fact that Arkansas has arguably the worst laws protecting tenants in the country.  Without a doubt, Arkansas is the only state that has a statute that makes eviction a criminal offense!  What that really means is that a tenant either protesting and withholding their rent to pressure a landlord to make repairs, or a tenant falling behind on their rent is seen under Arkansas law to be effectively stealing from their landlord.

A landlord can also evict a tenant with three (3) days’ notice for any reason or no reason at all and file a notice of “unlawful detainer” in civil court.  As the Attorney General’s website details that’s not a pretty process:

Unlawful detainer actions require a landlord to provide you with a three days’ written notice to vacate. If you do not leave, the landlord can sue by filing a complaint against you in court. After you receive a summons to appear in court, you have five days to object in writing to the eviction. Any objection must be filed with the clerk of the court in which the eviction action was filed, and you should send a copy of your objection to the landlord’s lawyer. If you do not file an objection, you can be removed from the dwelling by the county sheriff. If you do object, a hearing will be scheduled to determine the outcome to your case.

If that’s not bad, it can actually get worse for tenants.  As one report noted:

Tenants who plead not guilty have to pay the amount the landlord says they owe to the court before they can get a trial. In the Little Rock suburb of Jacksonville, they’re held on $250 bail.

If criminalizing non-rent payment isn’t enough to make Arkansas the most landlord friendly state in the country, the fact that there is no “warrant of habitability” guaranteeing that the tenant is living in a safe dwelling also makes Arkansas the only state without such a promise to its citizens as well.

It’s fair to say that Arkansas has the worst landlord-tenant laws in the country.  How long can this be allowed to continue?

New Orleans       Catching up on Skype this week, it was great to hear the progress ACORN Bristol had made in the United Kingdom in advancing the campaign to win what they call an Ethical Letting Charter or a model set of standards for landlords and tenants.  The campaign has been developing for months as tenants organized in Easton and other neighborhoods in Bristol have steadily banged on letting agents or real estate rental agencies to change their business practices on security, leases, and repairs.  Given the way the world works in Britain, the organization cannot just pound on the City Council for relief, so the campaign is forced to go after the industry and individual companies to win agreement on the standards.  After hard work the first company has voluntarily signed an agreement, so the bubble has been burst and ACORN members are determined to bring the rest in line.

The full text of the agreement is well laid out, but too long to include all of it here.   The key items though are utterly reasonable and well summarized.   The Ethical Letting Charter calls for the following major principles:

The ethical lettings charter centres upon a commitment to security of tenure; beginning with support for and use of recurring Assured Short hold Tenancies (AST’s); the strengthening of conditions for serving notice to tenants which enable more ethical evictions and repossessions; as well as extending time frames

Commitments centre upon recurring AST’s with no extra cost; a phasing out of tenancy fees, beginning with their transparent valuation including costs; the reduction of deposits to affordable amounts, stored within accredited tenancy deposit protection schemes that are not arbitrarily reducible; as well as the careful scrutiny of rent prices

Commitments centre upon making and keeping properties at a statutory and recommended level of quality, maintenance as well as health & safety. Checks, repairs and improvements should be carried out within sufficient time frames and to recommended legal standards

Commitments centre upon the stopping of discrimination against potential tenants due to their belonging to any protected group and/or being welfare recipients and/or parents/carers with dependents; as well as work with ACORN and the local authority to promote equal access in the future

ACORN intends to award “a Gold, Silver or Bronze Accreditation, reflecting the level of commitments” made by landlords and rental agencies.  The charter is firmly rooted in reality and understands that some of the improvements will take time and therefore ACORN indicates that it will monitor the signatories carefully as they move “towards greater levels of commitment” and improve their accreditation ratings over time.

This is a breakthrough campaign for tenants’ rights in Britain, and since the same issues pop up all around the world, it’s worth following closely.

Street Dogs “Up the Union”