Kansas City     Flying in and out of the Kansas City International airport is like a snapshot back in another time, more specifically a time when automobiles and the convenience of local customers dominated planning and performance.   Airports, and some train stations like the new ones in German cities like London, Berlin and Dusseldorf, are basically shopping malls where trains and planes slow down and pick up or drop off customers.  KCI reminds a flyer how quaint old airports use to operate.

Kansas City is made for Kansas City area residents.  They love being able to drop their family members off or pick them up right in at the gate.  The airport concourses are shaped like semi-circular pods so that if you live around here and are in the know, you can park inside the semi-circle and walk to your gate.  This is an airport built for speed from the street to the tarmac.  The addition of security from TSA means that rather than one centralized intake center common in most airports, old and new, there are stanchions in the hallways around groups of gates.  There are no real lines, and if you know your gate and walking right to it, this is faster for you.

Modern airports, like the new billion-dollar New Orleans airport, are fancy malls with popular local branded stores, shops, and food offerings mixed with the Starbucks, Peets, and other national conveyors.  By comparison, KCI is a strip mall in one of our neighborhoods with a bar, a newsstand, a pawn shop, and a tattoo parlor.  The whole airport is built on the premise of a convenience store not for sales, but for desperate items that you forgot or didn’t have time to purchase at home in Lee’s Summit or Emporia or someplace.  No one but the stranded and hapless business traveler would need to buy anything.  The California Pizza Kitchen workers didn’t bother to show for work and open up until close to 2pm in the afternoon in Terminal B.  The young woman working at the Great American Bagel & Bakery has been sitting behind the counter for the last half-hour on her phone with no customers in Terminal C.   The assumption seems to be:  who would bother?

If you have to change planes from one concourse to another, you have to leave security, go outside, and wait for the Red Bus that the loudspeaker announces will arrive every fifteen minutes.  Why would you be doing that the architect seems to be saying? Aren’t you just walking to her car to drive home?  Why would you be changing planes or meeting anyone from another terminal?  You must not be from here?

The giant Dallas/Fort Worth Airport is also built of similar interconnecting pods to suit the locals and automobiles, but at least there is a train that moves connectors from terminal to terminal on the ground level.  Otherwise, it seems like the same architect with a smaller budget was working in Kansas City.  They say there is a new airport being built here, but the only visible proof of that are more roads being built around the spaces between the terminals.  That’s not a good sign.  Airports of the future are less for commuters and more for connectors, and more for flyers than drivers.  The future is already here, and it doesn’t look like this in the 21st century. 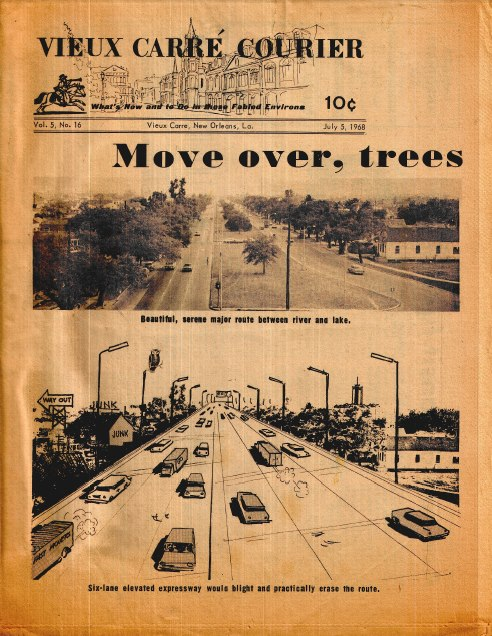 The front page of a 1968 issue of the French Quarter publication the Vieux Carre Courier, showing a rendering of the I-10 interstate to be.
Credit Joseph Makkos

New Orleans        A front page article in the Times-Picayune/New Orleans Advocate noted that days over fifty years ago then Transportation Secretary John Volpe pulled the plug on plans to build an expressway that would have run along the Mississippi River and through the historic Vieux Carre, transforming and destroying parts of the famous New Orleans French Quarter.  This is a victorious fight long celebrated by preservationists in New Orleans, and honored daily somewhere in the city by the hospitality industry for its contribution to their profits and by the city for the employment they generate.

The  40-foot high and 108 foot wide Vieux Carre riverfront expressway would have run along Elysian Fields Avenue, linking the Interstate System about two-and-a-half miles from the Mississippi River, then turned up river for a mile running near the levee to Canal Street, which bisects uptown from the Quarter and downtown, down a tunnel there and through the Warehouse District until linked up with the Mississippi River bridge.  The expressway was designed by Robert Moses, famed power broker, bridge-and-highway and public works czar of New York City and subject of the classic, award-winning book of that name by Robert Caro.

Elysian Fields Avenue has been the home of ACORN offices for decades, first at 1024 and now at 2221 St. Claude Avenue at the intersection of Elysian Fields, catty-corner to that old address.  The neighborhoods on either side of the Avenue are in the midst of huge gentrification, and the Quarter itself is hardly a neighborhood anymore, but certainly is high-end real estate.  Condos have come to the Warehouse District making the value per square foot more than $500, highest in this dead-broke city.

Often credited for leading the fight against the expressway were two young lawyers from New Orleans, William Borah and Richard Baumbach.  The progressive Stern Family Fund and its donors, especially Edgar Stern, Jr. and director, David Hunter, funded the fight and recruited them to lead the effort.  There’s was a legal strategy and a publicity strategy.  This was a campaign not an organization. Anne Bartley, the Arkansas philanthropist and activist, brought Borah and Baumbach, up to Little Rock to meet with me and ACORN in 1972 when we were fighting the construction of the Wilbur Mills Expressway, now known more often as I-630.  They largely counseled a legal strategy, but were helpful in encouraging us to make the fight and pursue it.

The I-630 divided Little Rock racially and in many ways by income.  The expressway that was completed in New Orleans above Claiborne Avenue, then the major commercial district for the African-American community in New Orleans, obliterated houses and businesses, and changed the area to this day.  Borah and Baumbach argue that the Claiborne expressway that bisected the famous Treme neighborhood was not a substitute for the Vieux Carre highway, since it was already in progress, but so were some parts of the New Orleans road, including a tunnel that still remains under Harrah’s Casino between Canal and Poydras.  There just wasn’t the same fight over Claiborne and Treme perhaps because it was the 1960s with so much energy going into desegregating the city and supporting civil rights advances generally that their voices could not be heard and heeded, but also because the same investments were not made to resource that fight.  There are few in New Orleans today, outside of the French Quarter and business community, who do not believe that Treme and Claiborne were the price of protecting the Quarter.

Beating a bad highway is cause for celebration and worthy of commemoration.  Living with a bad highway also should teach lessons as important and permanent, not only in New Orleans, but also in Little Rock, and other cities around the country, that still seem not completely willing to learn the devastating impacts of these projects. 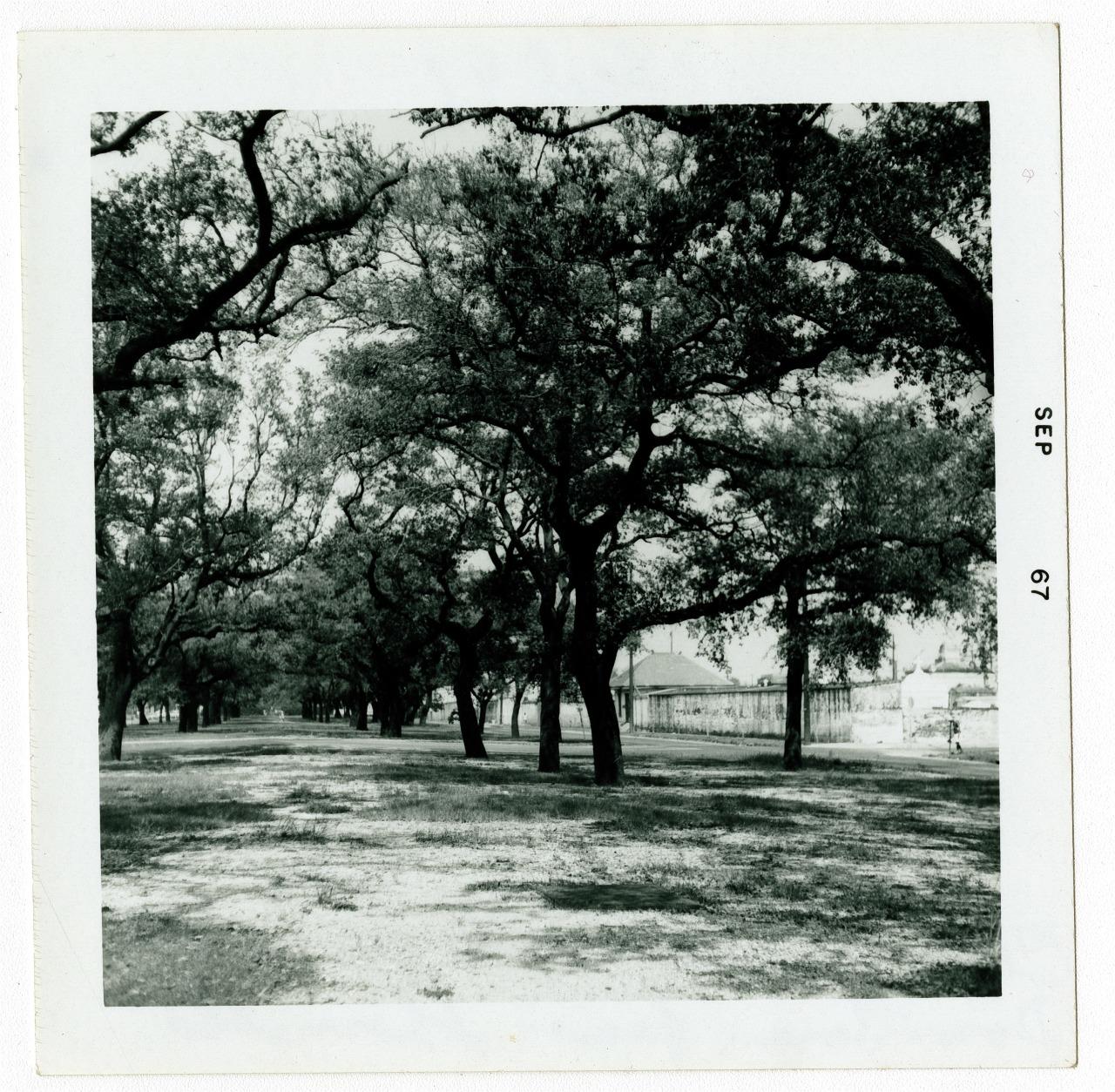 Snapshot view of Claiborne Ave. neutral ground before the construction of the I-10 overpass. Live oak trees shade a wide foot-worn path through the grass.
Credit The William Russell Jazz Collection at The Historic New Orleans Collection, acquisition made possible by the Clarisse Claiborne Grima Fund, [92-48-L.47]