Chicago The Organizers’ Forum has been hosting a 2-day meeting of over forty community, labor and other organizers in a quick immersion discussion of new developments in political methodology here at Cenacle Retreat Center a few blocks from beautiful Lincoln Park along the Lakeshore.  The sessions have gone remarkably well due in large part to well prepared and thoughtful presentations from some of the best out there.   For once we are going to have to say that if the progressive forces lose this time, it’s not for lack of trying!

In a few weeks you will be able to access the notes of this dialogue on the Organizers’ Forum website at www.organizersforum.org or read about it in some depth in a coming issue of the magazine, Social Policy.   For now you will just have to take my word for it.   Look at the lineup alone and you will see why this was such a powerful session:  Cathy Duvall, National Organizing Director, America Votes (on the new alliances and configurations); Orrin Baird, SEIU Legal Department (about the new legal framework); Caitlin Murphy, Lake, Snell & Perry (on the pivotal single women’s constituency!); Professor Don Green from Yale (on what really works on GOTV efforts); Greg Naylor, ACT (on how the PA voter registration effort worked); Zach Polett, Executive Director, Project Vote (on how we are registering more than 1,000,000 new voters this year!); Sarah Buecher, Working Assets (on how they are funding a million new registrants); Jeremiah Baumann, PIRG (on how they are pulling out youth voters this election); Madeline Talbott, Illinois ACORN (on the turnout and registration efforts that lay beneath the Barack Obama landslide in the IL Senate primary); Will Robinson, MacWilliams, Robinson & Partners (on tying issues to voting and messaging); Charles Lester, Political Director, Los Angeles County AFL-CIO (with a case study on the GOTV and coalition effort behind the Inglewood victory in stopping Wal-Mart); Dan Cantor, Executive Director, Working Families Party (on the power of fusion politics); and Holly Minch, SPIN Project (on communicating messages).  Wow, huh?

It’s hard to pull out all the gold in these mountains.  Some nuggets:

We were all taken to organizing school by the Forum in Chicago, but after taking a lot of notes and benefiting from a lot of discussion, we are good to go, and we’ll get all of you there with us, too! 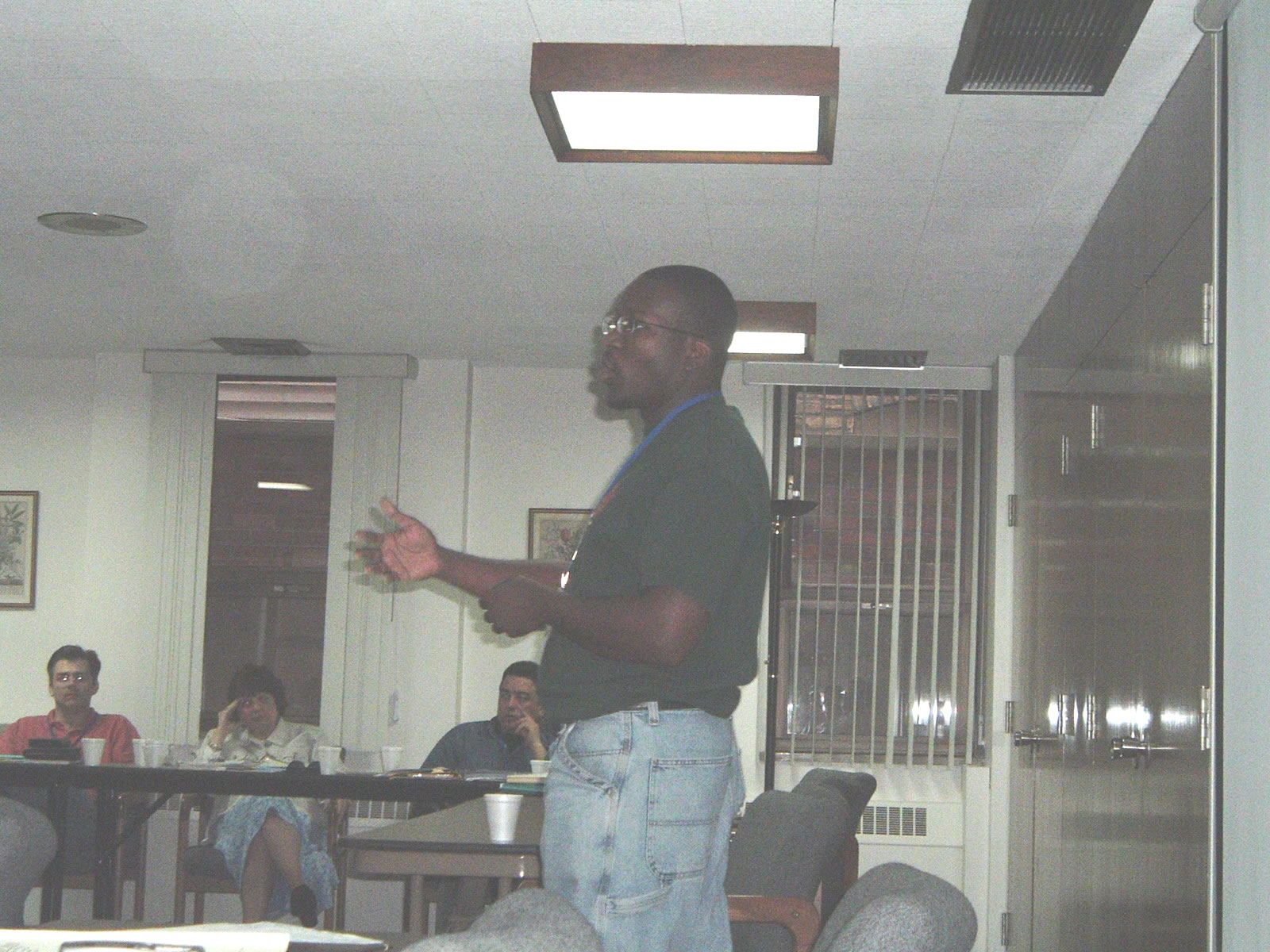 Charles Lester of the Los Angeles County AFL-CIO shows people how turnout made the difference in Inglewood in beating Wal-Mart.

Kansas City     As I ran up Quality Hill in downtown Kansas City past the Cathedral, I was almost surprised at the top of the ridge to see the sweep of the Missouri River ahead.  I was not surprised to see the development everywhere so typical of the remaking of older neighborhoods into gated communities specializing in “urban environment.”  It also quickly became routine to go past one old warehouse after another being resurrected into rental “lofts” block after block.

Coming up to the top of the hill there seemed to be a green space though which drew me like a magnet, hoping for something besides more concrete underfoot.  In the middle of a circular expanse was a monumental work, dominating the view and commemorating the famous and remarkable Lewis & Clark Expedition of 1806 and its “discovery” of the West.  One frequently forgets that Kansas City used to be part of the West.

There was another statute though even closer to the overlook and the edge of the terrace.  More old school with children perched beneath a balding man, seated firmly, and looking towards the Missouri.  The inscription spoke of the tribute of the First Ward for the works of James Pendergast up until his death in 1911.    One even more readily forgets Pendergast and the great pre-Progressivism Pendergast Machine which ran Kansas City from its bastions of strength along the famous river wards.  This was the machine that both made Harry Truman and which he spent a career, like so many politicians, both getting close to and running from, depending on how it fit the fashion and his needs at the time.

The Pendergast Machine deserved its own statute — certainly it was an organizational work of art, as effective as any urban political machine in the country from Tammany to Daly to any one could name.  Picking up immigrant votes, grocery bags, jobs, and door-by-door precinct work piled into mountains of favors, chits, and obligations and all cashed Election Day.

The New York Times had an article today about the new age Rove-Bush machine trying to go door-to-door in Ohio with an army of volunteers.  They described a battleground where each side has to convert even more of the converted to push the margins of drum beating victory to extremes.  They were drilling down deeply into their base to pick up experienced campaigns and hardcore adherents from their party activist ranks.  Many of these people had the time to devote to the campaign because they were seniors and retired from other pursuits.  To their credit they were “true-believers” trying to still make a difference, and doing it on the doors.   Others were “wanna-be’s” which is also a common political phenomenon.  Converting ambition into hard work is one of the surest motivators for organizers, no matter what the endeavor.

Fascinating really.  They described one fellow in Ohio’s methods of identifying Republicans to try and register to vote.  He looked for golf clubs in the garage or entryway.  Truth is, that always seemed a pretty clear giveaway clue to me, too!

I could tell him some other surefire, virtually gene imprint tests, but, hey, they are now in the suburbs and will find their way home too.  I hate to think what Jim Pendergast could have taught both of us about how to really pull the votes out!