Miami:             This is the season for spring break for college students.  Thousands — tens of thousands — of college students and other young folks from here and there tromp down to the beaches all over Florida, and Miami if they can get here.  Funny time to have a meeting in the midst of all of this, but that’s the way the calendar falls.

I’m here at a meeting of SEIU leaders in the South with the executive officers of the union getting a forecast of the issues — and the politics — for the upcoming quadrennial convention of the international union.  Making plans for four years to do things better with our members, which may mean doing things differently?

Things often need to change.  That point was made most powerfully by Gerry Hudson, a key officer of SEIU 1199, the giant health care local in New York.  Brother Hudson is also the chair of the SEIU Social & Economic Justice Committee, and he used the opportunity of his remarks to share some of his very personal memories of Miami.

He remembered being inadvertently booked into the Fontainebleau again in the 80’s when 1199 was applying for an independent charter from the AFL-CIO.  Walking up the driveway, he could feel hives breaking out on his arm as he got close to where there used to be a sign in front of this fancy hotel saying — “No Blacks, No Jews, No Dogs!”

Times have to change.  Only the sand should be all white on Miami Beach now. 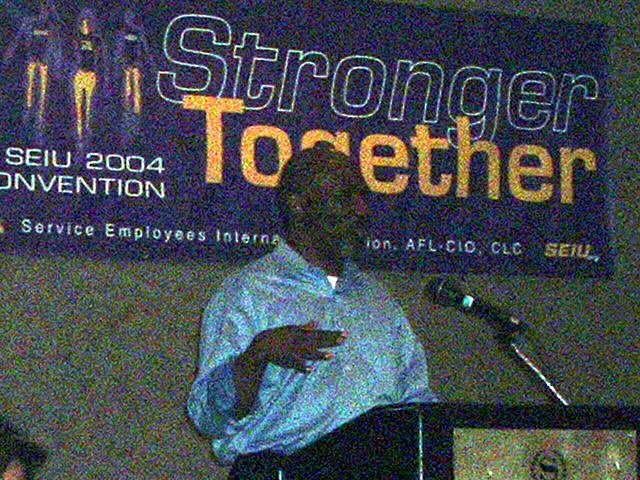 Gerry Hudson talking in Miami — too bad it’s such a bad picture!