New Orleans:                        Keeping up with the email traffic yesterday one message stood out from the rest.  It seems that in San Diego Head Start workers, their leaders and officials from their union, SEIU Local 2028 (www.seiu2028.org ), were on a one-week fast to protest their working conditions and the lack of bargaining progress.

I remember all of this clearly, because when the workers at Neighborhood House Association (www.neighborhoodhouse.org) organized last year, it was one of the largest Head Start units in the country to determine that they were going to have a union since our (www.seiu100.org) victory in Houston at the Gulf Coast Community Services Association a half-dozen years ago.  Things were obviously looking up for low paid, hard working Head Start workers in San Diego!

Turned out a little differently than I had hoped at least so far, but this is a story that’s not over yet.  Seems that Neighborhood House Association is not something that you want to have a house in your neighborhood.  Turns out they have been fighting everything about giving the workers a fair shake throughout the collective bargaining.

Talking to Mary Grillo, Executive Director of SEIU Local 2028 and one of the fast-ers, briefly on the phone today it became clearer.  I learned not surprisingly that the company was not particularly acting like a non-profit, but acting more like a staunch member of the Fortune 500 or something.  Seniority and a proper pay scale that reflects experience are especially issues because Neighborhood House wants to continue to play “pick and chooses,” rather than respecting the work some of the staff has done for years with children in lower income communities.  Workers even had to sue a couple of weeks ago to try to stop the company from cheating them on hours and overtime.

Clare Crawford, ACORN’s western regional director who is based in San Diego, mentioned something on the phone later that helped the pieces fall into place.  Seems the same guy, Howard Carey, the CEO of this so-called, non-profit, is pulling down $209,000 per year, while he has lawyers fighting to keep from paying the workers a decent wage.  It is sad to me when non-profits lose their way and start to believe that it’s all about them and their buddies, rather than service to the community.  What happened to stewardship and a bond with people?

So, almost ten people — workers, leaders, and staff — are fasting — hunger striking — to get the company to step back and do the right thing.  A rally today marked the mid-point in the one-week effort.  Almost 100 people have pledged to join the fast at various intervals for a day or longer to stand in solidarity.

You don’t have to pass up your Easter dinner or that extra plate of ribs at the barbeque, but how about taking 30 seconds and flashing an email to this bum at Neighborhood House (www.neighborhoodhouse.org)  and telling them you stand with the Head Start workers, and they need to stop this now, and do the right thing! 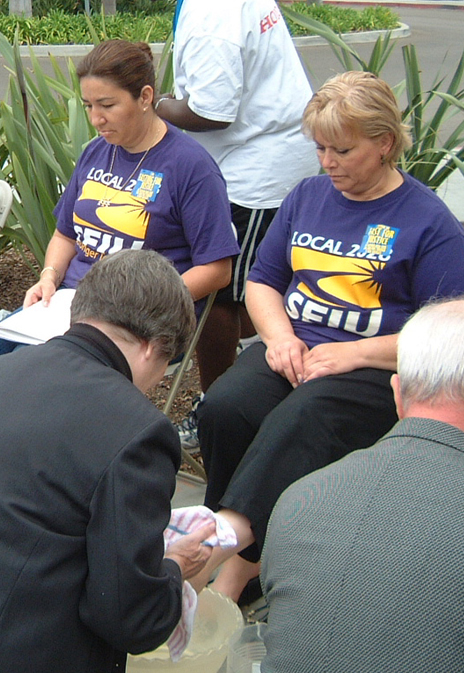 Cleansing ceremony for the fast-ers