New Orleans: Coming back from the conventions, one always feels a mixture of exhilaration, exhaustion, and relief.  Another mountain climbed, another bridge crossed, another milestone marked.  In the momentary lulls that follow as the troops trek home by planes, busses, and trains, one tries to take a short breathe – catch the wind and put it to one’s back, girding up for another long run.

One of the catch-ups I try to do is to wrangle some of the thousands of messages on our internal email conferences across my screen so that I can at least pretend that I’m catching up on the whirlwind of activity across the organizations.  Having followed our conferences religiously for years, recently this has seemed a losing battle – I’m over 4000 press articles behind for example, though better on the real business, thankfully, though one might think that how the press runs our work would also be important, it’s surprising how well we work without hearing those trees drop in the forest – but, that’s a subject for another day.

Any way it’s a delight sometimes to be surprised at major victories hidden in such minor forums.  Ginny Goldman, ACORN’s Head Organizer in Houston, is one of our best young organizers, and getting her to leave Chicago, where she had worked for years to drastically expand our operations in Houston was the spark to set the prairie fire in Texas.  And, one of the pleasures of being here for so many years is that one never tires of the joy of winning and having won my own spurs as an organizer in the streets, I have a special love for reports from the field.  Let me share the jewel I found from Ginny:

On the bus ride home from the airport on Monday night, Congresswoman Sheila Jackson Lee called the cell phone to let us know that the Secretary of HUD himself, (buddy of Bush) Mr. Alfonso Jackson would be in Ms. Waddle’s living room (ACORN member) on Wednesday morning to announce HUD’s commitment to reinstate the full Emergency Home Repair program in Houston.  BIG WIN for us!
The home repair program has been shut down here since November.  Houston was the first city in the country to have their program shut down by the Fedsbecause they blew all $5 million of HUD funds on shoddy contractors who leftseniors in worse shape than they were to begin with.  We’ve been hitting the city on this repeatedly and doing press tours of our members houses for the last couple of months. On June 22nd we won a commitment from the Mayor to put $3 million of their own local funds into home repairs and to contract companies like the Filter King. So now we got that $3 million plus the HUD money reinstated and we are moving!!
Our pal Alfonso showed up at Ms. Waddle’s home with his police escorts and
secret service guys talking into their shirt sleeves, as our members hung
out on her porch in their red shirts and new ACORN visors looking at the
pictures from the convention.  Alfonso was almost in tears as he toured Ms.
Waddle’s home.  He couldn’t help but announce that he would make sure her
house would be the very first one to be fixed.  We then went over to the
local community center to meet with the Congresswoman, the Mayor and the
Housing Director to watch them all grandstand and then finally commit to
work with ACORN to get the whole program revamped.
We have a meeting with the head of the housing department next week to make sure every other ACORN member makes it up to the top of the list, as well as get our other demands met.  Most importantly we want the city to keep dumping more of its own money into the program in addition to HUD to make up for the 8 months that the program was shut down.  We are also working with the trade unions to get union apprenticeship programs as part of the deal to get our folks some training and some work.
No better way to make it back from a convention than with a big fat win and
a member of the President’s cabinet in our members living room. (see
pictures)
Ginny

You see what I mean?  Does it get sweeter than that?  Hard, consistent struggle with right on our side, rewarded by a pure, simple victory – I’ll take it every time, and this time, thanks to Ginny for sharing it with me and all of us!

As she says, see the pictures! 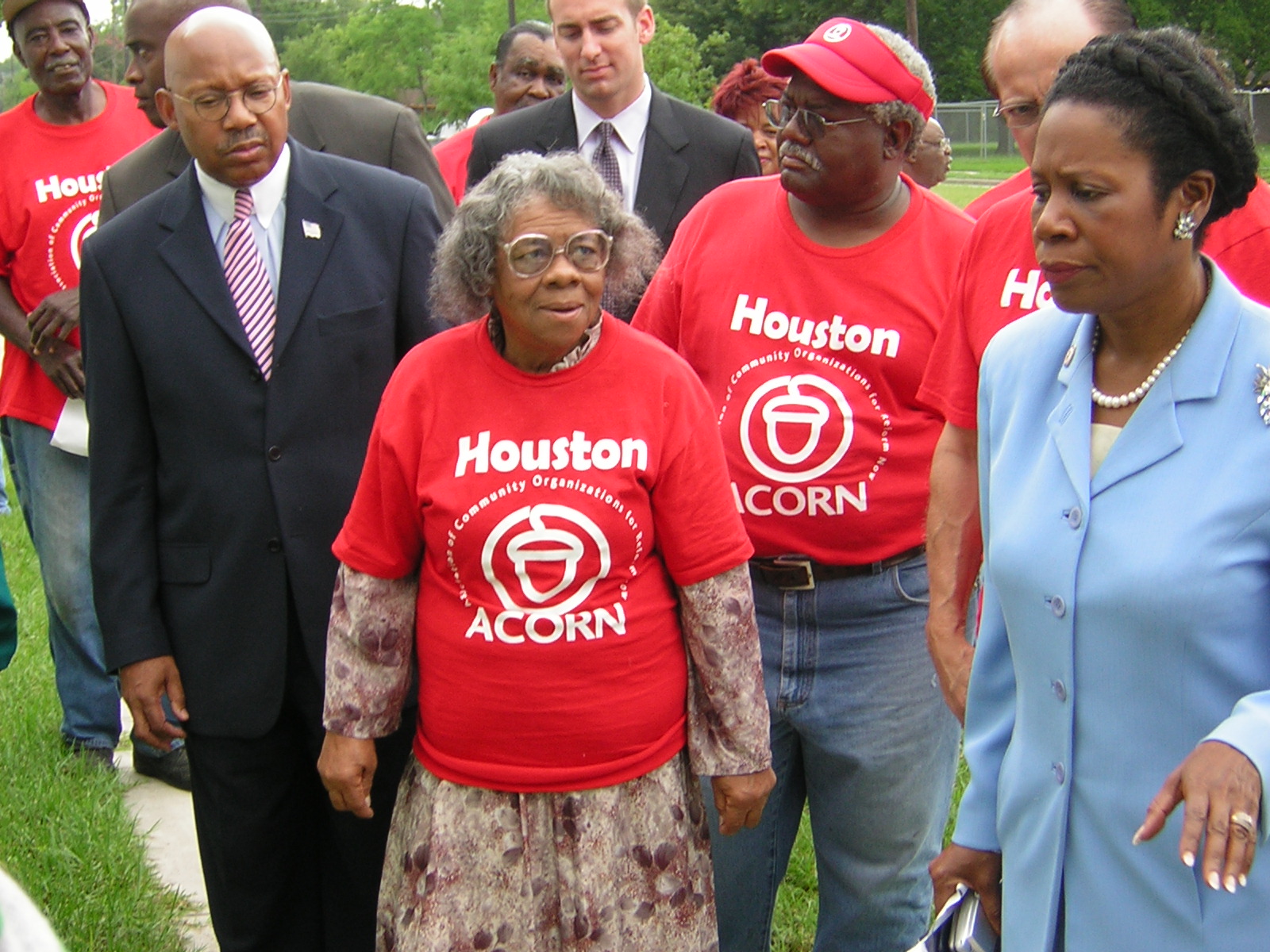 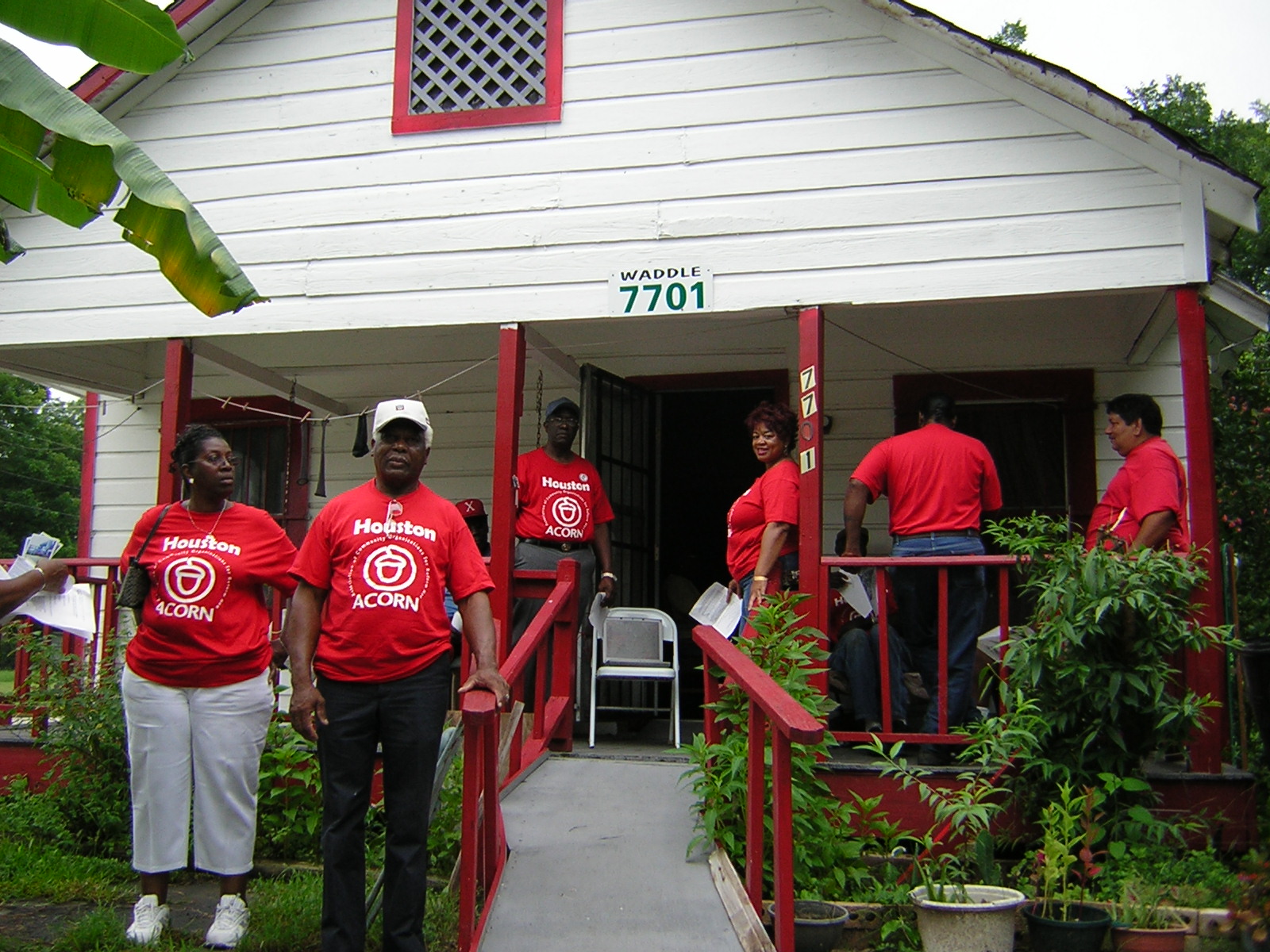