Lafayette: The SEIU Local 100 Annual Leadership Conference was going to be held this year in Lafayette, Louisiana.  We had won an election for 300 Head Start workers employed by a private non-profit called SMILE in Lafayette at the beginning of this year and had just come to a tentative agreement on the contract.  Additionally, we had also won another election up the road in Ville Platte for another group of 50 Head Start workers and had other contracts around the Lafayette area that needed the support that such an event always offers.

Since we have a “broke-ass” union that’s always scraping and scratching for every dime, we had our usual innovative package for the conference where the leaders – who were paying their own freight – were staying at the Holiday Inn where the meetings were being held, while the staff were staying at something we heard would run about $15 dollars a bunk at something called the Blue Moon – which we heard was a cross between a hostel and a flophouse.

Driving in on Friday night from New Orleans, I checked the members and their hotel – everything was good.  It was tempting to check and see who needed a roommate, but in for a penny, in for a pound, I hit the Blue Moon around 10 PM.  Driving up was strange though – it was hard to find parking.  The lot was full.  I managed to find a place on the street near the front by happenstance.  Young, twenty somethings were standing in the street and milling around this funky house in the yard.  There was a wooden ramp running up to where music – live music – was playing in some kind of a bar.  I could hardly find the door to the Blue Moon “hotel” even though it was right in front of me.

It dawned on me finally.  I was sleeping in a Cajun roadhouse!  I loved this damn place!

The front door was locked at ten so in the middle of this semi-mayhem, I’m trying to decide how much the fool to act, and knocking on the door.  An engaging young man in dreadlocks with a Spanish accent and a Puerto Rican t-shirt unlocked the door, gave me a full power handshake, and I was in the Blue Moon.  He asked me if I was one of the “100’s,” and somehow made it sound cool.  I affirmed and was led to my bunk, which was easily the widest and sturdiest metallic bunk bed that I had ever seen.  It was a “double bed” bunk with an extra wide top level.   This rocked!

Rocked, was right because the band was playing strong within 20 feet of me as I lay down to call it a night, and continued to until near mid-night.  But it was a friendly, happy, cold beer / hot summer night crowd.

Come the morning, there was peace again.  Only some cigarette butts in the grass and the occasional half-empty, half-filled drink glass with pink something in it, indicated that this was anything but a quiet morning in an old wooden house somewhere near downtown Lafayette.

Sitting around a big wooden table early the next morning with the Local 100 organizers with Jose and me sipping cups of strong coffee that reminded him of Honduras, Orell talking loud as Big O always does, and the biggest dispute of the morning being the fact that Baton Rouge Ron had tried to turn off the air conditioning in the bunkroom in the middle of the night, which really isn’t done in mid-July in south Louisiana, I couldn’t help smiling and somehow feeling like we had found a home for our troops here at the Blue Moon. 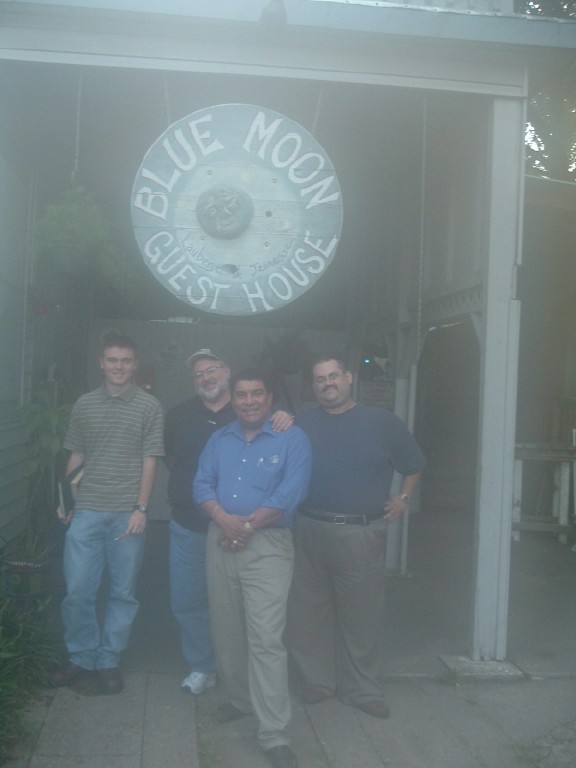