New Orleans: At this point in the quadrennial electoral wars we are all searching tea leaves in some real earnest for any sign.  The polls are a mishmash of one or the other, if not knotted in a deadlocked tie.

The other night coming back to town I stopped by and talked to my folks for the classic “parental poll.”  Sparing all of the details of countless “discussions,” which is the polite way we refer to heated political arguments over decades now, it is safe, even if sad, to say that my dad particularly has been on the winning end of many more presidential contests than I have.  I asked my folks, vibrant and sassy souls now in their 80’s (can this be possible?!?) who they were liking in this race.  I’ll spare you, but suffice it to say – Bush is in big, big trouble on the parental poll!  Though I can’t remember if she’s really declared herself on this formally, my mother, the veteran English professor, has always considered Bush something close to a murderer just for what he has done to the language.  My dad seems to have now come to join her on the issue of Iraq.  He doesn’t like feeling that he has been lied to by the President.  He finds it unbelievable that we may have killed 100,000 civilians.  He is mystified that there are entire parts of the country controlled by insurgents more than a year after we supposedly “won” the war.

ACORN in partnership with Project Vote registered a couple of folks shy of 1.1 million new voters, almost all in battleground states far surpassing all of our previous records and virtually anything else done by anyone else in this election.  Registering lower income voters and pushing them to participate is something we have done for many, many years and many, many elections.  Normally, there is high consensus that it is a good thing and part of the foundation of any hope for a democratic system in our country.

But that’s normally.  This year in the polarization of the presidential contest, our great success at voter registration has become part of the ground zero targeting by partisan forces, many of which are trying to repress the actual participation of new voters.

For weeks I have been getting “attack” emails on these topics.  I got a number of them from some wacko asking me “did they have to be an acorn member to register known terrorists?”  There are a million replies that immediately come to mind!  Luckily, better judgment instructs that one simply ignore, press delete, and get on with life and work.  But I finally figured out why I was getting these love notes by reading a column by Peter Roff distributed by the UPI nationally on 10/28/04 called “That’s Politics!”  Seems a conservative columnist and author named Michelle Malkin had claimed in her column that ACORN – “a left-wing” organization – had registered an accused terrorist, the illegal alien Nuradin Abdi, the suspected shopping mall bomb plotter from Somalia, in Columbus and she had attributed this wildness to a report published in the Columbus (Ohio) Dispatch.   David Brock on his website Media Matters for America (MMA) belled the cow here by going to the source and finding that the Dispatch had never indicated that ACORN had done any such thing!  In fact as he reported, “…according to the Dispatch, Abdi appears to have registered to vote at the Ohio Bureau of Motor Vehicles.”  All of it just plain poppycock, but of course now it is a story with a life of its own that we have found in a basket of papers around the country.

Hey, ACORN registered 1.1 million people and the truth is that when someone is legally and eligible to vote, we have no idea what they have done in the past, nor what they will do in the future – including whether they will vote.  We’ve also had a lot of excitement on the wires once again in battleground states like Colorado, Florida, and Ohio about whether there were any registration errors.  It is possible there were.  We think though that our success rate will be better than 99.9% accuracy.  The problem is that could still leave some flubs on 1100 cards.

Of course we are sorry if there were any errors, but once we have apologized for that, we are not going to apologize for having gotten 1.1 Million folks registered and ready to vote, and we’re going to do our damnedest to make sure they actually get out and vote as well.

The fact that everything is down to the wire goes to the heart of alienation in our communities where too many times no one has felt their votes mattered.  This time we are proving once again that every vote does count.

That’s what it’s all about in America.    Shame on any of the fire breathers out there on any side of the question who can not come to grips with that simple fact!

At the least I can promise that you will not find any apologies here for trying to make democracy work. 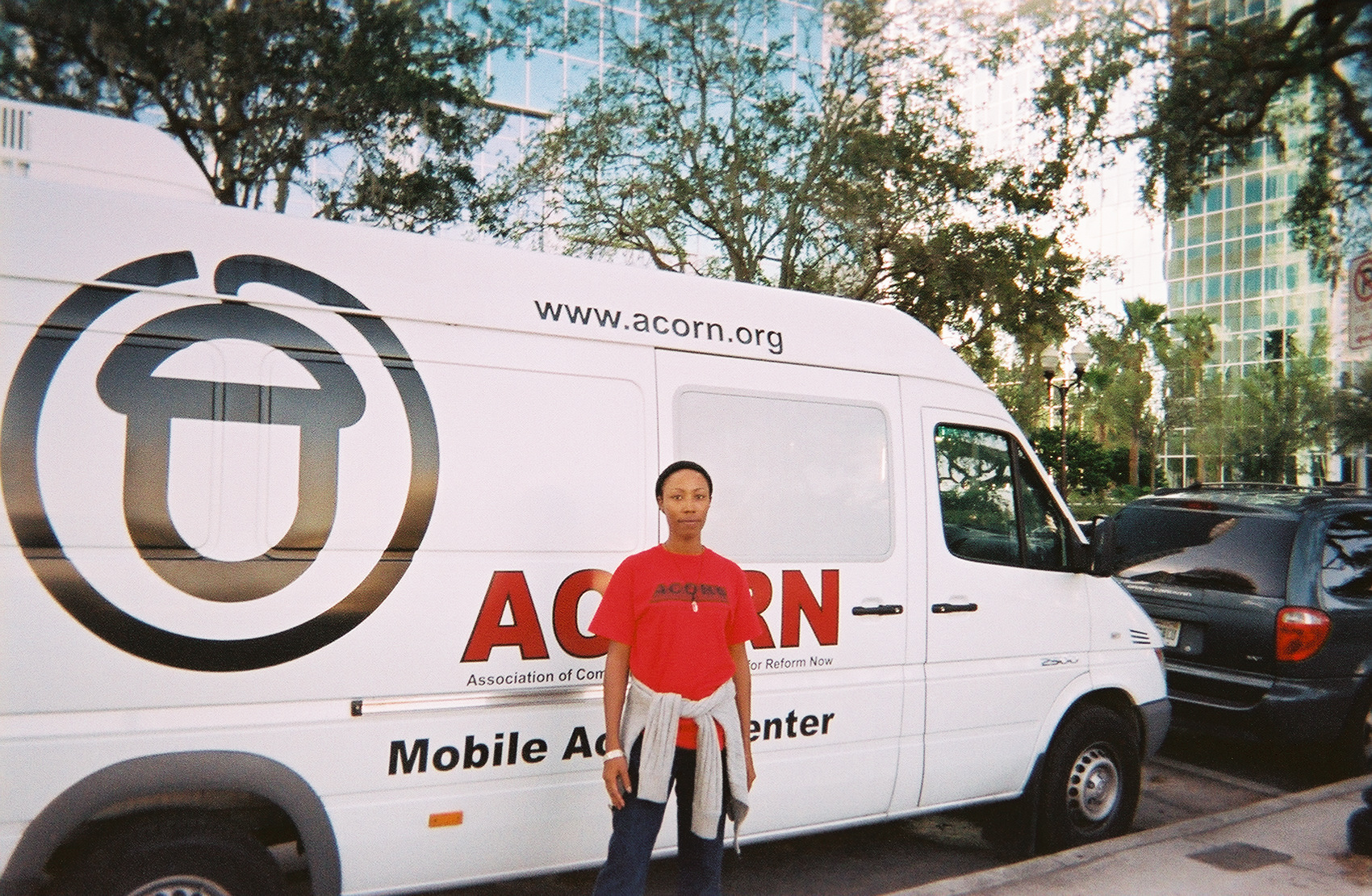 St. Louis: Two months before we SEIU Local 100 and SEIU Local 880 had decided to have our 17th Annual Staff/Board Retreat in a battleground state, where we could combine our evaluation and planning of our work with some real time GOTV experience for our leaders and staff.   In the luck of the draw Illinois, the 880 heartland, was thankfully solidly blue for Kerry and Louisiana, Arkansas, and, certainly, Texas, were virtually as red for Bush.

As Keith Kelleher, 880’s exceptional head organizer, and I conferred Missouri seemed a good compromise, since we couldn’t sell Arkansas’s prospects or much of anything else.  We thought most likely we would end up in Kansas City, which had been oft discussed in the revisiting of the last election because of the lower than expected turnout of minority voters in that city.  But SEIU was moving a big GOTV effort in the St. Louis area on this weekend, so we settled on a strategy to be part of the play and a piece of their plan.

Our 70 combined leaders and staff joined another 300 plus from SEIU locals in the Midwest, mostly from the Chicago and St. Louis area along with a group of SEIU “heroes” as they are called – members or people being paid to take the place of members — who had been dispatched in waves, working full-time on the campaign for months, at the vanguard of labor’s commitment to political change for months as part of the incredible $60 million dollar commitment that all of us as SEIU locals had made with the International union to this election.  This was also part of our first up close experience with ACT – American Citizens Together – the widely publicized “527” (named after an IRS code section which created these formations) brainchild of labor political guru, Steve Rosenthal.

In many ways SEIU and ACT were partners so symbiotically close that it was impossible to separate where one started and the other ended.  Certainly a large part of the financial expenditures made by SEIU had gone to ACT probably more than $20 million of the overall $100 million total.  In other ways Missouri was a good indication of the closeness of these ties.  Grant Williams, the ACT coordinator for Missouri, was the “on leave” president of SEIU Local 2000 in the state.  The America Votes coordinator for the area was Mike Dolan, an SEIU operative from the West Coast who had been detailed to Missouri for the last several months.  And, so it went down to the field supervisors and crew leaders.

They had done smart work and good work.  The polls now had put us 5-6 points behind and Kerry had pulled out his ad money in the state several weeks ago effectively conceding the state to Bush, just as Bush had done recently in Pennsylvania, as both candidates husbanded their dollars for the grand finales.

In 100-880 and ACORN experience our task was the time honored one of getting what we have always called “count on me’s” from perspective voters committing that they will come and vote and vote as promised.  Here they were seen as “pledges.”  Our Local 100 crew found ourselves in the racially mixed, lower income, working turf of south St. Louis, which has always been one of my favorite areas of the city.  Vernon Bolden, Local 100’s President, and I were a team working a “walk list” of new and “infrequent” voters around Chippewa in the middle of the “Indian” streets of South St. Louis.  The weather cleared to a warm and sunny day and we were cooking.

The response was magical – when we were lucky enough to find people home!  New voters were anxious about their registration cards.  They were excited about the election.  Older voters were committed and relished the fact that they still felt that they were in the battleground.  White voters though, young and old, were split heavily between “yellow dog” Democrats unable to conceive of going “red” and others clearly more comfortable with Bush and going that way.  One woman described to me, almost painfully, the fact that she her father was an old time union man, but she and her husband had just started a small business and though Bush was their guy now.  This was all unsettling.  We picked up lots of commitments, but we could not turn the contradictions for these voters.  The countryside was built into the city, and it was conservative and confusing even to these uncertain allies of the President.

Almost as worrisome as Vernon and I worked the list from block to block was the increasing predictability that newly registered voters between 18 and 25 on our list would be gone.  I do not mean “not home” but moved, gone, caput, lost in the city, at large in our world.  Unless the young voter was still living with the folks, invariably we were peering into windows without blinds to see empty rooms.  This group was transient.  It was hard to believe that we would find them voting in significant numbers on Election Day, and it was heartbreaking.  When we did find them – they were ours, all the way and aggressively.  But mainly they were long gone!

The celebration that night was restrained.  We were there in force, but some of our people were recovering from the unusual experience of mountain-goating over the St. Louis neighborhoods with its hills and rises and stairways.  A lot of the locals weren’t there at the party to meet the aspiring, Midwestern sincere gubernatorial candidate whose face we knew from the door hangers we left on many knobs in on the south side, because St. Louis had made their way into the World Series against the Boston Red Sox reprising the 1967 games almost 40 years ago.  Myra Glassman, the 880 Field Director and her teenage daughter, Rachel, led the troops on to the dance floor, as many of us were leaving.  We were happy.  We had done a good job.  We had represented.

But, we were just passing through and one could felt he battleground being deserted even on the doors we hit and the streets of the sidewalks downtown and all around.

We had gotten 4000 commitments, but mainly we were keeping in close.  We couldn’t feel the victory here where it’s all “show me.” 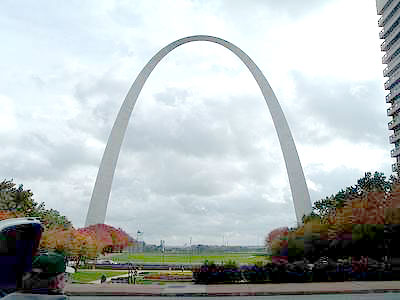 Orell Fitzsimmons, Local 100 Texas state director, looks at the Arch as we prepare to GOTV. Below: SEIU 100 and SEIU 880 teams do “trunk talk” in order to get the walking lists before hitting the streets 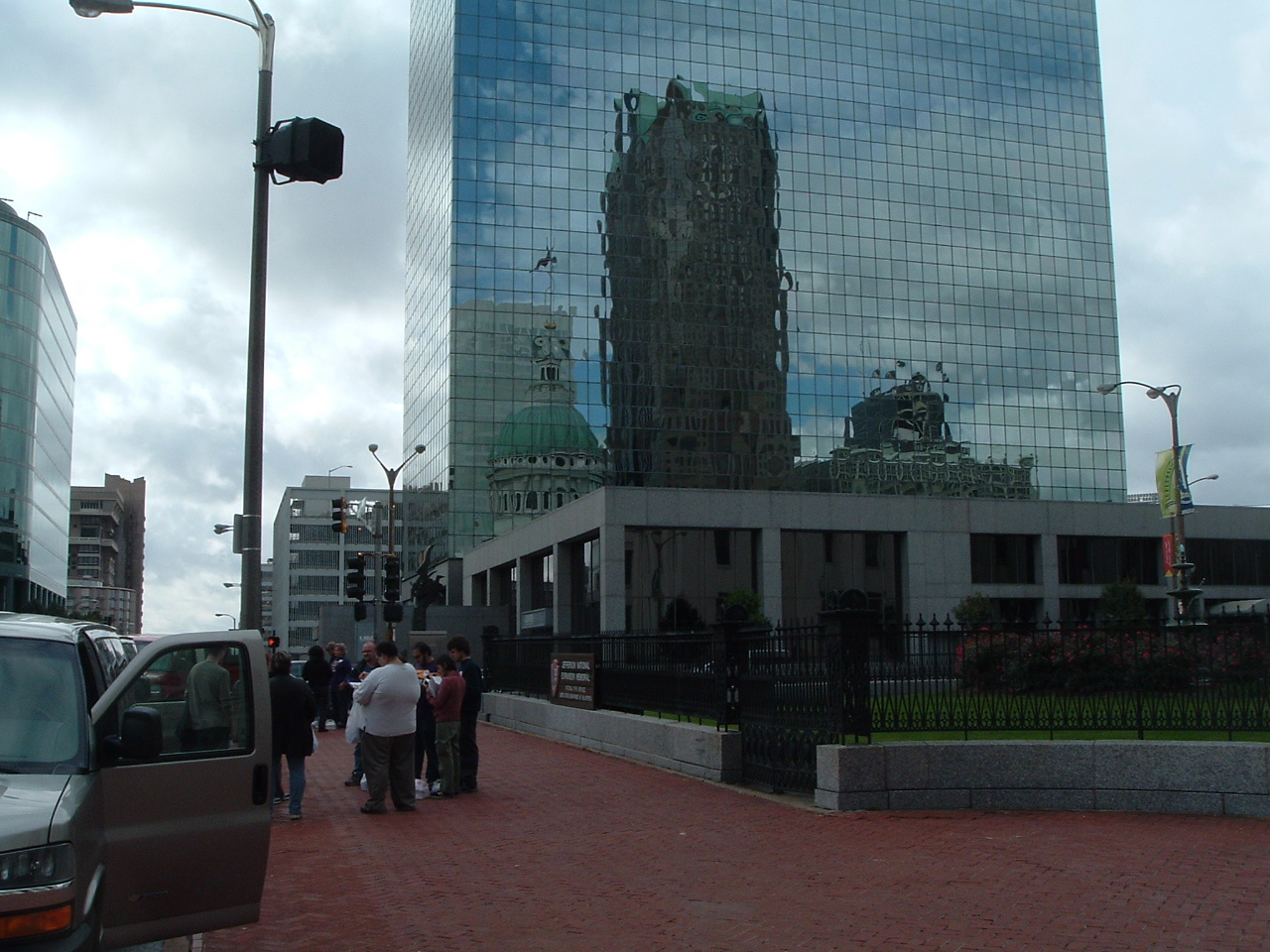