New York:  I was a sucker for the whole idea.  From the first time I had heard that it was really going to happen, I had noted the dates in my calendar on the happenstance that I would be anywhere near New York.

I did not understand exactly what the “Gates” were supposed to signify, but the whole outrageous idea of a series of huge orange flags on steel stilts throughout Central Park just seemed a hoot.  Quite honestly it appealed to me pretty much solely on the basis that it was just plain different and that it would add huge variety to the wintry spell of the park.  I think it is solemn obligation of every one of us to do everything we can — within reason and perhaps just on the other side of reason — to fight boredom, and the “Gates” seemed perfectly in tune with that pursuit.

I was not disappointed whatsoever.  I ended up having a meeting in the City and then an obligation the next day to speak at a lawyers’ conference at Yale, so I stayed close enough to the Park that I could get there without too much difficulty.  Early in the morning, I ran in the cold and thoroughly enjoyed running for miles under the Gates, as my feet thudded on the uneven sidewalks of the Park and the sheets of orange billowed above my head whipping in the wind and drowning out my recognition of my heavy breathing.  I thought it was great!

Almost as fun, has been reading the little swirls of controversy that this project has stirred up. The artists — Christo and Jean Marie, his wife and partner — are quite the exotic characters in their own right.  Older than dirt, he with a mane of white hair and hers, I guess in fairness, I would say orange as well, and they had doggedly pursued this notion of running these flags throughout Central Park off and on for decades.  For some reason Mayor Michael Bloomberg had reached out to them and said why not.

Why not indeed?  There is precious little free, public art and this was a big, huge of it.  For the City of New York, it was a huge bargain bringing in almost three-quarters of a billion dollars in tourism dollars reportedly and costing nothing.  In fact part of the price tag was an actual donation of close to $3 million by the artists to the City Park system.  The artists even cleaned up after themselves once it was all over.  Turn that down!

Various small minds quibbled over how it could have costs over $20 million that the artists claimed to put on this extravaganza, but who cares, why look a gift horse in the mouth?  Can’t we tolerate a bit of a scam for a walk on the wild side?  I think so.  I don’t begrudge them any hustle they have to pull the pieces of this together, because as I said, it cost me nada, and it was worth every penny.

I also think we need to support public art as a great democratic expression.  The arguments on whether something like the Gates is more public, than art to me is a rallying cry in its defense.  We need artists with a vision that tries to capture the full imagination of the people and respond in grand ways to such inspiration.

The orange blowing against the brown of the trees was in fact a wondrous sight to behold.  I only wondered as I ran under the Gates what it might have looked like against the white of snow, and envied the lucky citizens of the world who saw such a sight a week later.  Damn!  I bet that was great, too! 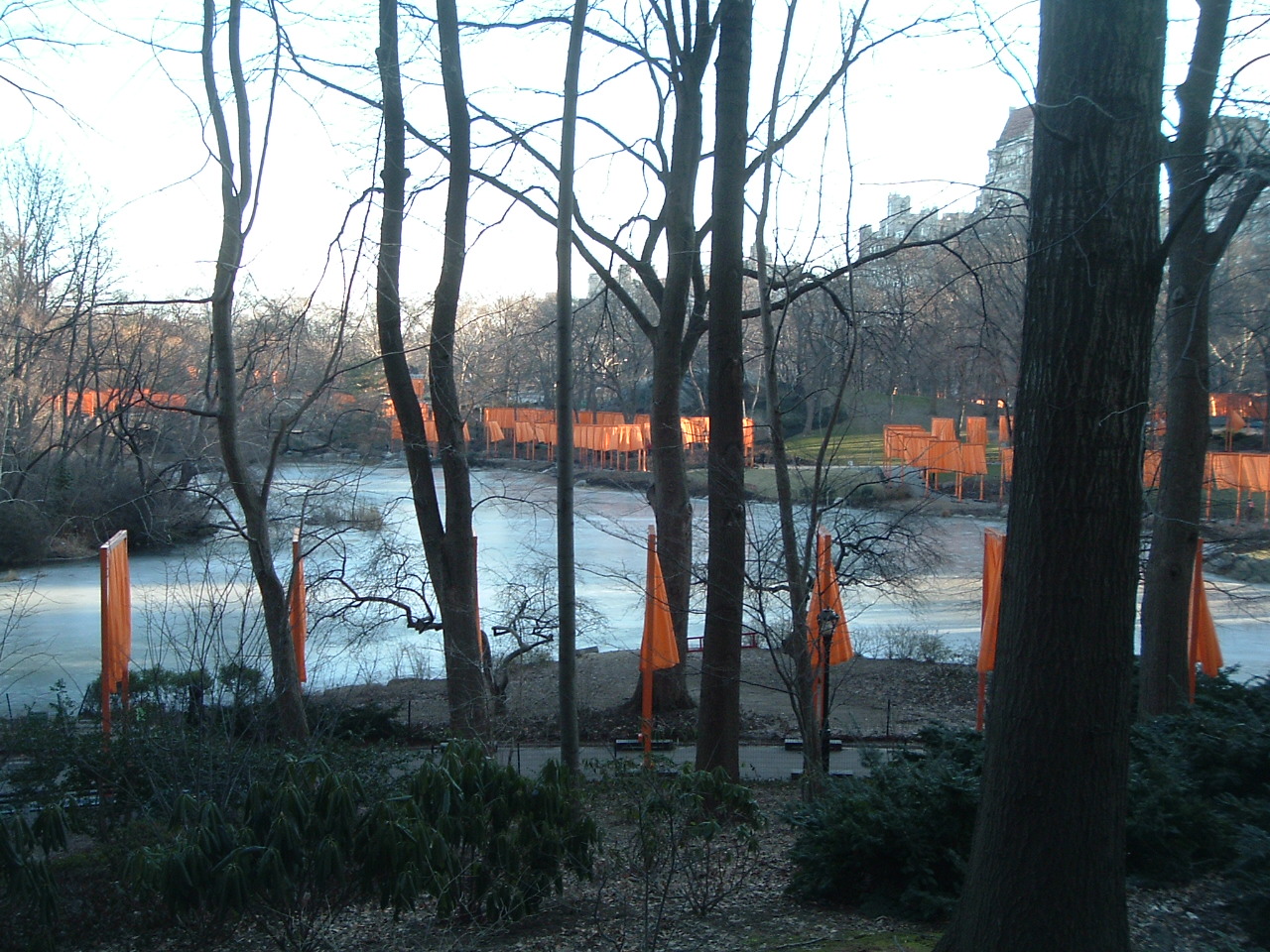 The Gates near dawn near the Central Park pond close to 51st Street. 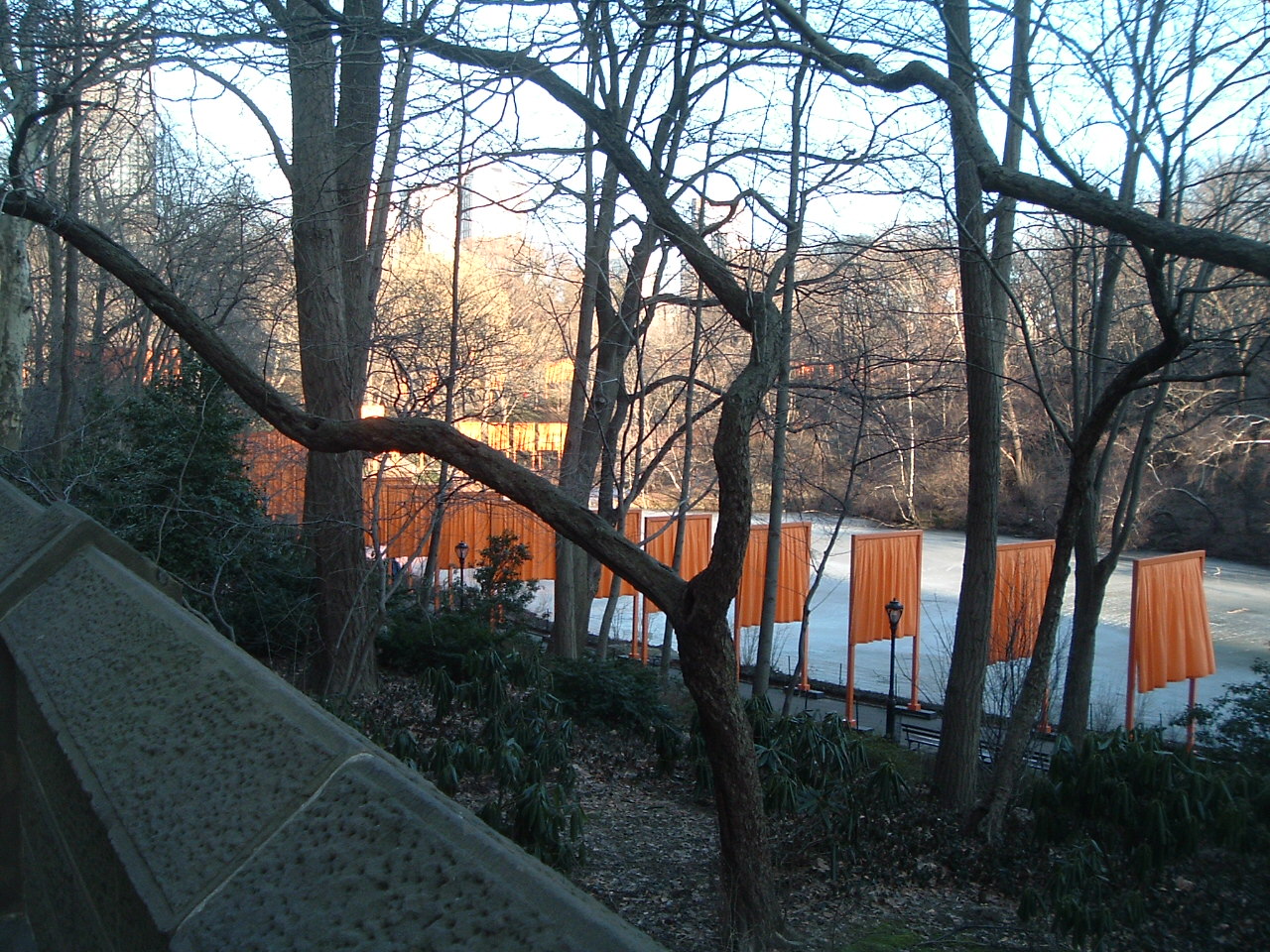