Rapid City, South Dakota: Barbara Bowen and I sitting in on a semi-annual meeting of the staff and leaders of the Western Organization of Resource Councils (WORC) being held at the Historic Alex Johnson Hotel in Rapid City, South Dakota.
I had not been in Rapid for at least 25 years.  The beautiful park along the river that replaced the scars of the flood zone of 1972 was a welcome sight.  The impact of the base closing was now on everyone’s mind.  Rapid was also now billing itself as “President’s City” because downtown on four sides of every corner for block after blocks one found statues of various presidents.  Not just statues coming down from Mount Rushmore, but Gerald Ford, Ronald Regan, Jimmy Carter, Richard Nixon along John Quincy Adams, Madison, Washington, and Jefferson.

This town was definitely about government in some ways, which made it appropriate for me to commiserate with Pat Sweeney, the WORC Executive Director, about the weird recent Supreme Court decision that overturned their earlier victories ending mandatory check off for beef and other producers to marketing programs.  These campaigns are similar to the ubiquitous “drink milk” campaigns for milk producers, and are supposed to provide for marketing campaigns run by the government and funded by something like a dollar per ton of cattle on the hoof.  It all adds up to about $60 million per year — big bread!   Producers had filed suit because they felt the campaign did not represent them and their interests and in fact were counter to it.  The lower courts had been favorable to their pleadings, but the Supreme Court had ambushed them in a surprise attack and overturned what had seemed like huge victory only months beforehand.

Judge Antonio Scalia had written for the majority that there were no free speech issues and infringements here because one could not object to “government speech,” and these marketing campaigns — like it or lump it — were the government saying what it thought had to be said and the producers paying the bill.   Seems almost like taxation without representation, but the majority bellied up with Scalia.

One kind of precedent is this whole notion of protected and paid for “government speech.”  Sounds like there is a lot of bull in all of this! 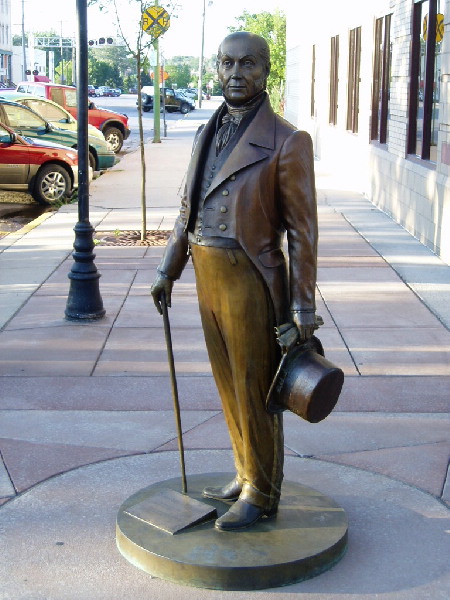 Look, isn’t that James Monroe! A President on many of downtown Rapid City’s street corners.