New Orleans: As the debate concerning labor’s future rages on, prodded by Andy Stern, International President of the Service Employees International Union (SEIU) and answered by one union after another, President Sweeney has agreed on the need for debate and the need to form committees to discuss the various proposals generated.   Workers in general and union members in specific can hardly find cause for inspiration or action in these multi-point programs.  This is true, except in one very important area:  the proposal for a full-scale campaign against Wal-Mart.

In the case of Wal-Mart, Stern has argued that one clear “purpose” for the AFL-CIO is in leading campaigns which transcend the interests of any single union and find common cause for all unions and indeed all working people.  At SEIU’s July 2004 convention in San Francisco, Stern sought and received a commitment from the delegates for $1 million to mount a Wal-Mart campaign.  Stern then argued in the August 2004, AFL-CIO Executive Council meeting in Chicago that $4 million be set aside by the federation for such a campaign.  More recently he has publicly argued in the debates around restructuring the federation that as much as $25 million should be set aside for the Wal-Mart campaign, virtually earmarking all of the HSBC/Household credit card money that goes to the federation.  Sweeney has shrewdly stated publicly that perhaps $25 million is not even enough to fight Wal-Mart — indicating that it might take even more!  Disappointingly, very few other unions have taken up the battle cry over Wal-Mart, perhaps because they believe that this is all just an argument between one or two people and a half dozen unions, rather than a fight for the future for American workers.

I would argue that a campaign on all fronts against Wal-Mart is the single organizing effort that offers the most hope for working families .  Furthermore, driving an organizing program around Wal-Mart and its workers could potentially change the tide for labor and create organizational capacities that would give us fighting and winning forces for our future…

So begins an article that I wrote that was recently published in the Summer Issue of the New Labor Forum about organizing Wal-Mart.  I would like to encourage you to take a look and see if you agree that this challenge is worth accepting and taking seriously?   The full text of the article by clicking here or at Waderathke.net. 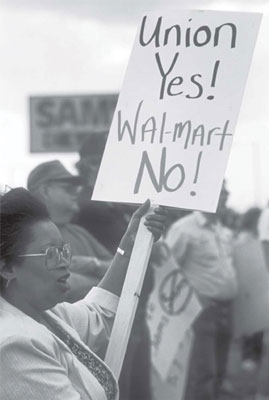