Mumbai:  Making our way through the steamy morning of Mumbai with cars careening within millimeters of each other amid the constant symphony of tooting horns — one of the few traffic safety precautions on the streets of the city!  We were unprepared for the relative calm of the bustling campus of Mumbai University, where our meeting would be held.  Standing in front, as I had for hundreds of meetings to see who would arrive and when they would do so, I could look from the Institute’s driveway past king palms, crotons, and lily’s to a small grassy park past the building.  Within an hour we began with more than 70, union leaders and organizers from Mumbai and many other parts of the country, as well as several professors, labor researchers, and others.  Wal-Mart can bring people through the door!

We started slowly as we tired to have our brothers and some sisters come to understand in the midst of the many other issues they face daily that there was yet a new threat — and opportunity — posed by Wal-Mart, Tesco, and other giant global companies proposed to amend the FDI (foreign direct investment) through Parliament so that with majority ownership in joint ventures with Indian enterprises, they could enter the retail market.  In the morning despite our best efforts it seemed, as the discussion opened to the floor, that we might be lost in a combination of defeatism, disunity, sense of inevitability, and lack of capacity to fight.   The tide of the conversation seemed to turn though in the discussion in the late morning, as our union friends began to understand that the language and metaphors of “site fights” as we told the stories of stopping Wal-Mart in Chicago, Englewood, and St. Petersburg, and likened those sites to India and what was done to what they could do, and community standards to “country” standards.  The notion of a “living wage” as part of the demand seemed to catch on as various speakers picked up the issue of decent wages and acceptable standards.

It became clear that the issues holding our friends back was not Wal-Mart.  They understood that quickly and knew how to respond.  The problems were almost American.  With five central federations of unions dominating the country all of whom have relationships and sometimes dependencies with political parties, the real issue was became clear in the underpinning of many of the remarks was disunity.  It would take a lot to agree on joint action.  It was not impossible — the threat of privatization for example was one that brought all unions from different stripes together — but clearly they were considering whether or not the intrusions of Wal-Mart was a sufficient threat to put aside the obstacles and come together to fight.  One wonders if we are soon going to be confronted by the same calculus on different issues in the United States.

The problems of leverage and winning neutrality and organizing rights appealed, but confronted directly the fact that despite union protections in the Indian Constitution, there was no national procedure for recognition for any union, or therefore for one union as opposed to another.  In some ways this was fine, any union with strength could operate with an employer, but the employers all held the upper hand, because there were no legal requirements that any employer had to deal with any union or combination of unions.  Forcing recognition and labor rights at a Wal-Mart would confront the issue that the employer in essence would decide which union it felt like recognizing or bargaining with collectively rather than any other procedure.  We have come to a point where the employer decides on unions here, but at least we can pretend there is a law.  In India there is no illusion.

Nonetheless, many were engaged and intrigued.  The notion of aligning with community interests, consumers, and others in a broader alliance had great appeal and many felt this would make such a campaign with labor unions different.  It was a long day of education for us.  We felt many times like bystanders to a fundamental national discussion which bounced from one articulate speaker to another often both surprising and profound.

At the end of the day as the consensus emerged finally that a memorandum would be prepared and circulated with demands (country standards!) and then pushed through each federation to Delhi, where meetings were agreed to be organized with MPs and the Government, and a campaign of sorts organized to confront the threat of Wal-Mart and force these concessions, we had hoped that the unions were moving forward.   We will see very soon. 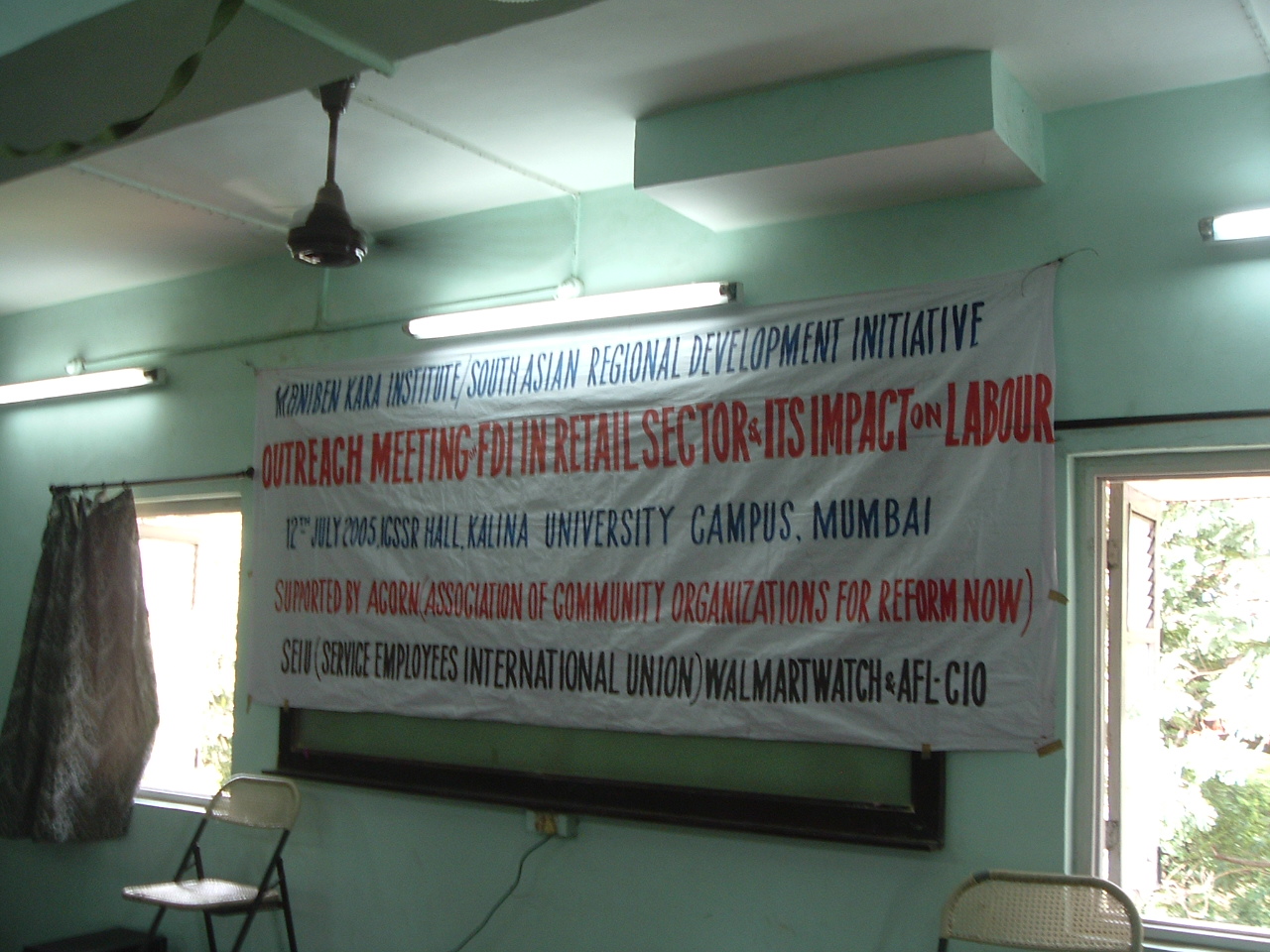 The banner announcing the meeting.
The debate is engaged.
Wade outlining “site fights” and community standards. 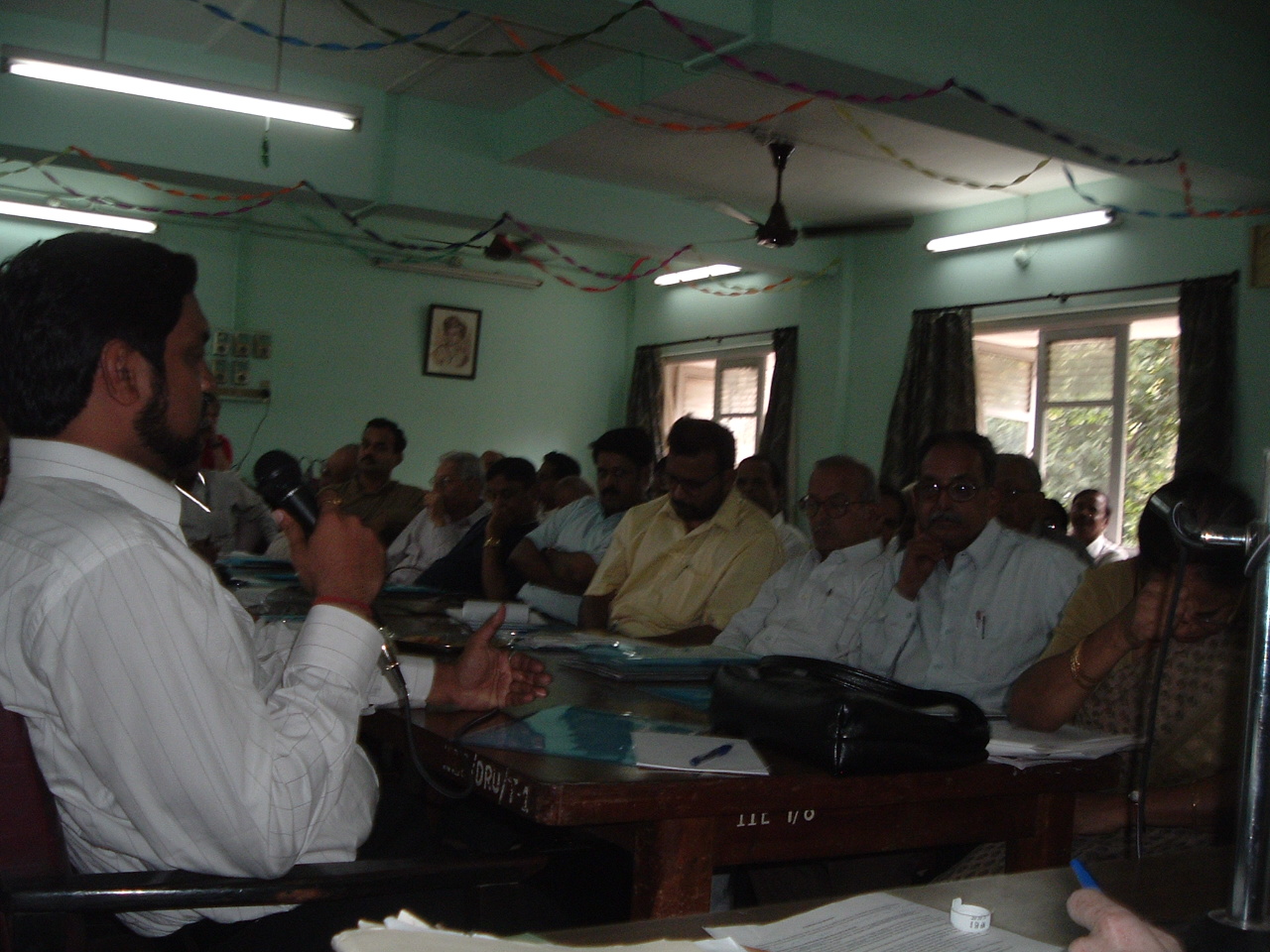 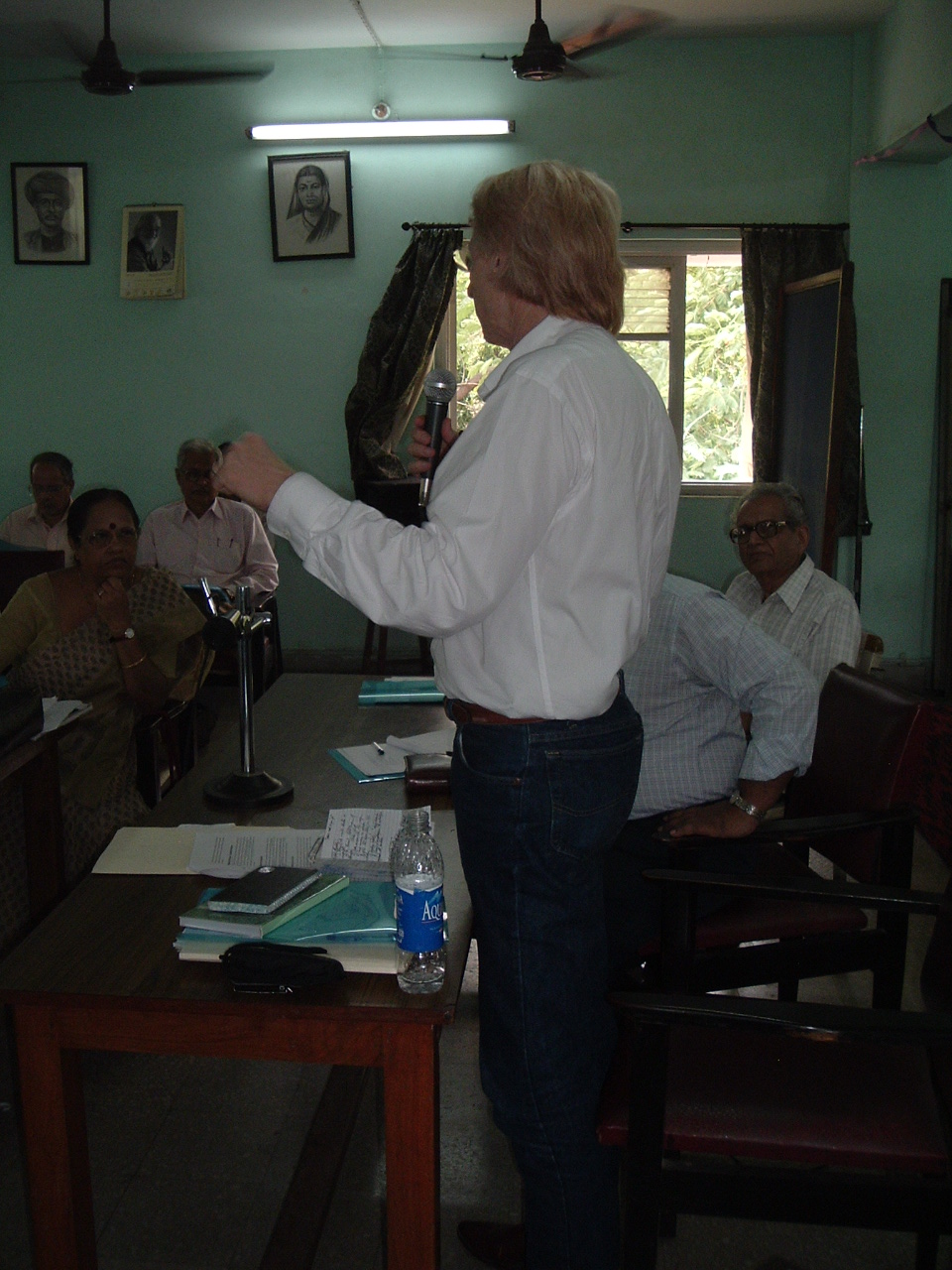