Denver   At this point it appears that the union had been crushed and beaten for all intents and purposes before the first picket sign went up. Now the whole thing is a bone yard with nothing more than the smell of death.

The cold math favored the company. Moving from 4000 odd mechanics to less than 2000 might have seemed hard, but when you are replacing $36.00 per hour jobs with $25.00 per hour jobs in an industry that has loss more than 100,000 workers, the company was fishing in a well stocked hole. There were a lot of former mechanics glad to put down a stockman’s apron at Wal-Mart for another chance at the tools and a living wage.

There are a lot of other lessons as well for the future of organized labor in America.

One has to do with solidarity. The Aircraft Mechanics Fraternal Association (AMFA) is a pariah. It is a small, independent union that was built by raiding existing unions and accusing them of having agreed to concessions in the industry. Having stolen members from other unions and accused other leaders of being sell-outs, certainly they could not have expected other unions to save them from their own rhetoric. This was a situation that was tailor made for the company. One could say that this was unique. Unfortunately, the fragmentation of organizations within firms and the overall airline industry does not make this as one off as we would hope. There are a lot of unions in the industry with their own clams. Machinists, flight attendants, pilots, teamsters, and communications workers all have a piece, but one needs to now worry whether any of them have any power. Clearly none of them can do it by themselves. One needs to worry about this outside of the airline industry as well.

One has to do with skills. 21st century business models are about deskilling and retooling. The archaic notion of AMFA that they were skilled workers and that their skills would somehow protect their jobs and wages has few places in modern firms. Investments in tools have value because they are replicable and produce consistent quality. Skills have become cheaper because they are now mobile and global, which means that they can be bought cheaper and replaced more easily, including by subcontracting, which is part of what we are witnessing here. Work is being dumbed down everywhere in the main, so that most jobs are driven to repetition and lower skills at lower prices, while a premium is paid for specialized work with few jobs and higher prices. This is not just in airlines. This is the dilemma of modern labor that many are still refusing to face.

And, then it’s back to math again. In an industry upheaval of restructuring it is not clear that even a united labor movement or one union in airlines could have avoided the hard choice that comes from a bad calculus. When an industry is drowning in red ink produced by the failure of its own business model, workers are virtually powerless to turn back that tide. An article in the New York Times earlier this year noted that some airline jobs were now paying less than Wal-Mart jobs. Workers, just like the mechanics on the picket line, can decide whether they want to keep their jobs — and their unions — and the chance to fight again and survive at lower wages, or whether they are willing to lose their jobs in a pyrrhic fight to save their wages. This equation is draconian. There is no way to turn it around and find a good and winning result. I imagine that the AMFA leadership was not as stupid as it looks. I imagine that they faced the age old quandary of knowing that they were beaten and forcing the company to whip them first, because they couldn?t lead their own members away from the ledge where they had pushed them in the first place.

Choices they were unable to make, someone else will make. The International Association of Machinists (IAM) from wire service reports seems happy enough to take back as many jobs as they can get for ramp and cleaning workers. There’s another lesson there as well. No matter how many deaths on the killing field, there will always be someone willing to rise up to make a deal that was beneath you.

Oh, and I guess it is also worth remembering that American business is not pro-union, and they are not going to let your sorry ass not come to work in some distant city or town, because you say you might be uncomfortable flying scab during a strike. This is a race to the bottom and you had better be running, brother! 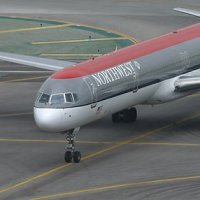 Not the shot that starts the race to the bottom, just another mile marker.