San Francisco      A new organization announced itself recently in Florida when a group of Wal-Mart associates came before the press and explained that they had organized an association with several hundred members in Orlando, Tampa, and St. Petersburg. Their first campaign was to help their co-workers experiencing drastic changes in schedules to file for supplemental unemployment so that even though they were being cut to less than full-time hours, they might be able to survive with an unemployment check to supplement their Wal-Mart wages. They called for other workers who were being forced to quit, to ask them for help in filing for unemployment on a constructive discharge.

It was a humble beginning but nonetheless a beginning of something very different. This was an association, not a union that wanted to unite Wal-Mart workers to stand for their rights, to solve grievances on the job, and engage the employer. This was going to be something to watch.

Here is what others had to say:

Wal-Mart Workers Are Finding a Voice Without a Union
From The New York Times
By Steven Greenhouse
September 3, 2005

TAMPA, Fla., Sept. 1 – Having failed to unionize any Wal-Marts, American labor unions have helped form a new and unusual type of workers’ association to press Wal-Mart Stores Inc. to improve its wages and working conditions.

With its first beachhead in Central Florida, the two-month-old group is already battling Wal-Mart, the nation’s largest corporation, over what it says is the company’s practice of reducing the hours that many employees work, often from 40 a week to 34, 30 or even fewer, jeopardizing some workers’ health benefits.

Belva Whitt, a cashier who earns $7.40 an hour, said she had joined the new group, the Wal-Mart Workers Association, largely because she was unhappy with her wages and because her hours were reduced to part time from full time many weeks.

“I’m a single mother trying to raise my son, so not having that money makes it hard,” said Ms. Whitt, 30. “Sometimes I have to decide, am I paying the rent or will I have food on the table?”

The association says it has nearly 200 current and former Wal-Mart workers and is growing by 30 workers a week. Members pay dues of $5 a month. In Florida, its membership includes workers from 30 stores in the Tampa, Orlando and St. Petersburg areas, and it is also seeking to enlist Wal-Mart employees in Texas.

The group’s sponsors include the United Food and Commercial Workers Union, the Service Employees International Union, and Acorn, an advocacy group for low-income people. It has also received support from the Marguerite Casey Foundation, which helps low-income families, and the Nathan Cummings Foundation, which promotes social justice.

“We are building something that’s never been seen; it’s neither fish nor fowl,” said Wade Rathke, a top Acorn official who is the chief organizer for the association. “We’re focusing on Wal-Mart because it is the largest employer in the area – and in the whole nation – and is setting standards that affect communities and employment relations across the nation.”

The association’s workers, Mr. Rathke said, would seek to “aggressively engage the company on their rights and how they are treated.”

He said the company’s associates, as Wal-Mart calls its workers, were free to form such an organization. But he said that Wal-Mart hoped employees would feel free to bring any concerns to upper management through what the company calls its open-door policy.

As for the reduction of hours, Mr. Fogleman said, “For years we have had a scheduling system in place that is designed to match associates’ work schedules to projected customer flow to our stores.”

Warren May, a spokesman for the Florida agency in charge of unemployment benefits, said Wal-Mart workers who remained on the job might qualify for unemployment compensation if their hours were cut sharply. Mr. May said those who quit their jobs because of a reduction in hours might have a harder time winning benefits.

Carl Jones, one of the leaders of the new group, said Wal-Mart’s pay was too low, pointing to the $9.40 an hour he earns after five years as the lead shopping cart pusher at a Wal-Mart in Apopka, outside Orlando.

“It’s really hard for me and my wife to make ends meet,” Mr. Jones said. “They treat workers like we’re just something there to be used and to get as much out of us as they can.”

The association says Wal-Mart is betraying the desire of its founder, Sam Walton, to maintain a family-friendly company.

Ms. Whitt and several other members of the association say that Wal-Mart’s health plan has such high premiums and deductibles that they cannot afford to join it. As a result, Ms. Whitt and thousands of other Wal-Mart workers receive health coverage through Medicaid.

The Marguerite Casey Foundation has granted $250,000 to an Acorn-backed project that is in turn giving much of that money to the new association.

“We want to broadly support economic justice,” said Chantel L. Walker, the foundation’s director of programs. “We believe that Wal-Mart could really make a difference because of the size of their work force and because of the leadership role they play.”

The association is the latest attempt by labor and community groups to squeeze at Wal-Mart’s pressure points. In the past month, the food and commercial workers have led an effort, joined by the nation’s two big teachers unions, urging consumers not to purchase school supplies at Wal-Mart. Another group, Wal-Mart Watch, plans to announce a week of demonstrations and meetings nationwide in November to criticize Wal-Mart’s wages and benefits.

Labor leaders say they support the nonunion Wal-Mart Workers Association because with the company fighting aggressively against unionization, they recognize that it will be extremely hard to unionize any Wal-Marts.

“This dovetails nicely with what we’re doing,” said William McDonough, organizing director of the food and commercial workers, which has sought unsuccessfully to unionize several Wal-Marts. “Our role is to help Wal-Mart workers get a voice on the job.”

Mr. McDonough said his union hoped that Wal-Mart workers would grow so emboldened and that community support would grow so strong that unions could succeed at organizing some Wal-Marts in a few years.

The new association is not urging shoppers to boycott Wal-Mart.

“I like Wal-Mart, I enjoy working for them,” Ms. Whitt said. “But what they’re doing is wrong. They need to fix it.”

TAMPA – Six current or former Wal-Mart Stores employees had a sobering message for fellow employees during a news conference Wednesday: Wal-Mart might cut your hours or force you to shift schedules with little notice, they said.

But if the employees tried to send a strong message to the world’s biggest retailer and fellow employees, their presentation appeared less than perfect. Members of the new activist group, the Wal-Mart Workers Association, repeatedly invoked the name of Wal- Mart founder Sam Walton, saying Wal-Mart is no longer the family-oriented company it was under his direction. Reporters at the news conference, however, pointed out that Walton died in 1992, long before most of the six ever began working for Wal-Mart, and challenged their qualifications to talk about working under his direction.
Another gaffe: One young man, who identified himself only as Sheldon, stood alongside the other Wal-Mart employees during the news conference. He did not speak during the conference, but he later acknowledged that he left the company for a reason unrelated to a cut in hours – he had been fired after being accused of theft.

Wade Rathke, one of the organizers of the conference, acknowledged that Wal-Mart employees are green at speaking out about the company’s labor
practices.

“This is our maiden voyage,” Rathke said.

A Wal-Mart spokesman on Wednesday said the company does not have a policy of cutting employee hours or forcing them to work new shifts.
Nonetheless, Rathke said they were trying to bring attention to the way they say the Bentonville, Ark.-based company has slashed some employees’ hours to the point that they cannot make ends meet. In other cases, they say the company has demanded that employees switch to new work shifts months or years after joining the company, causing hardship on their families.
For example, Salathiel Thomas, 70, of St. Petersburg, said she was forced to quit her St. Petersburg Wal-Mart job after the company tried to change her shift from 8 a.m. to 3 p.m. to noon to 5 p.m. That would have interfered with raising her granddaughter.

“Is my son going to eat today, or is the rent going to be paid?” Whitt said.

Rathke said the Wal-Mart Workers Association has set up a help line, 1-888-774-9276, for workers with similar problems. The association will try to help employees file for partial unemployment compensation if they cannot get enough hours. A spokesman for the Florida Agency for Workforce Innovation said it is possible in some cases for people who are employed to get partial unemployment benefits if their hours have been cut.

The Wal-Mart Workers Association was organized by activist groups and foundations, including the Association of Community Organizations for Reform Now, the Service Employees International Union, Sierra Club and the Marguerite Casey Foundation, which is an organization advocating for low-income people. The association held similar news conferences with disgruntled Wal- Mart employees in Melbourne and Orlando this week. Wednesday’s conference in Tampa was at the same building housing ACORN on Cass Street.

Dan Fogleman, the Wal- Mart spokesman, said the company for years has used a computer program to figure out when stores need the most employees, and it schedules the employees who have said they can work those times.
In recent years, the company had gotten a little lax in enforcing the schedules that the computer created, but recently Wal-Mart has begun sticking to them more diligently.

Ultimately, those employees who can work the peak periods will get more hours, while others might see fewer hours, Fogleman said. 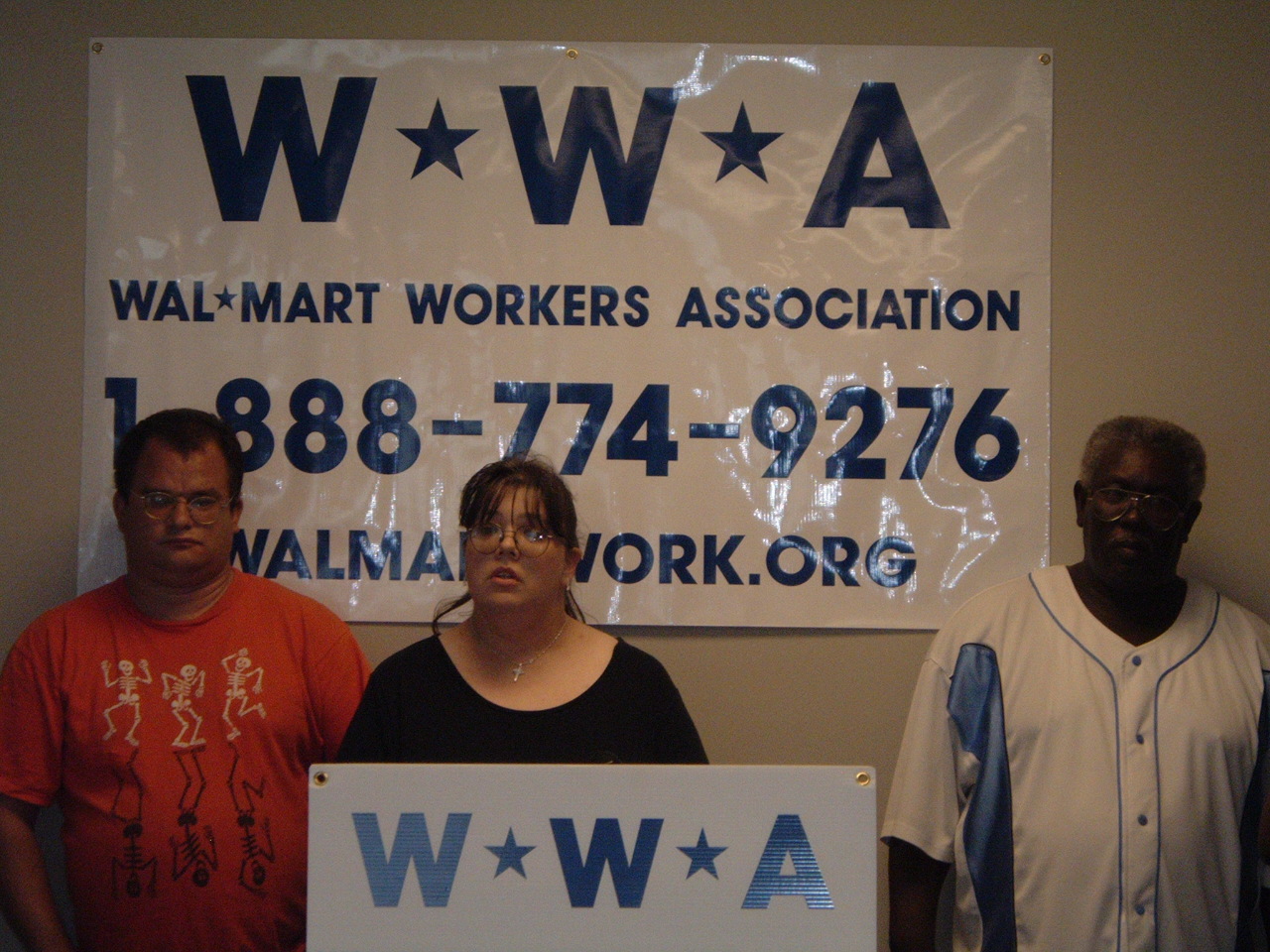 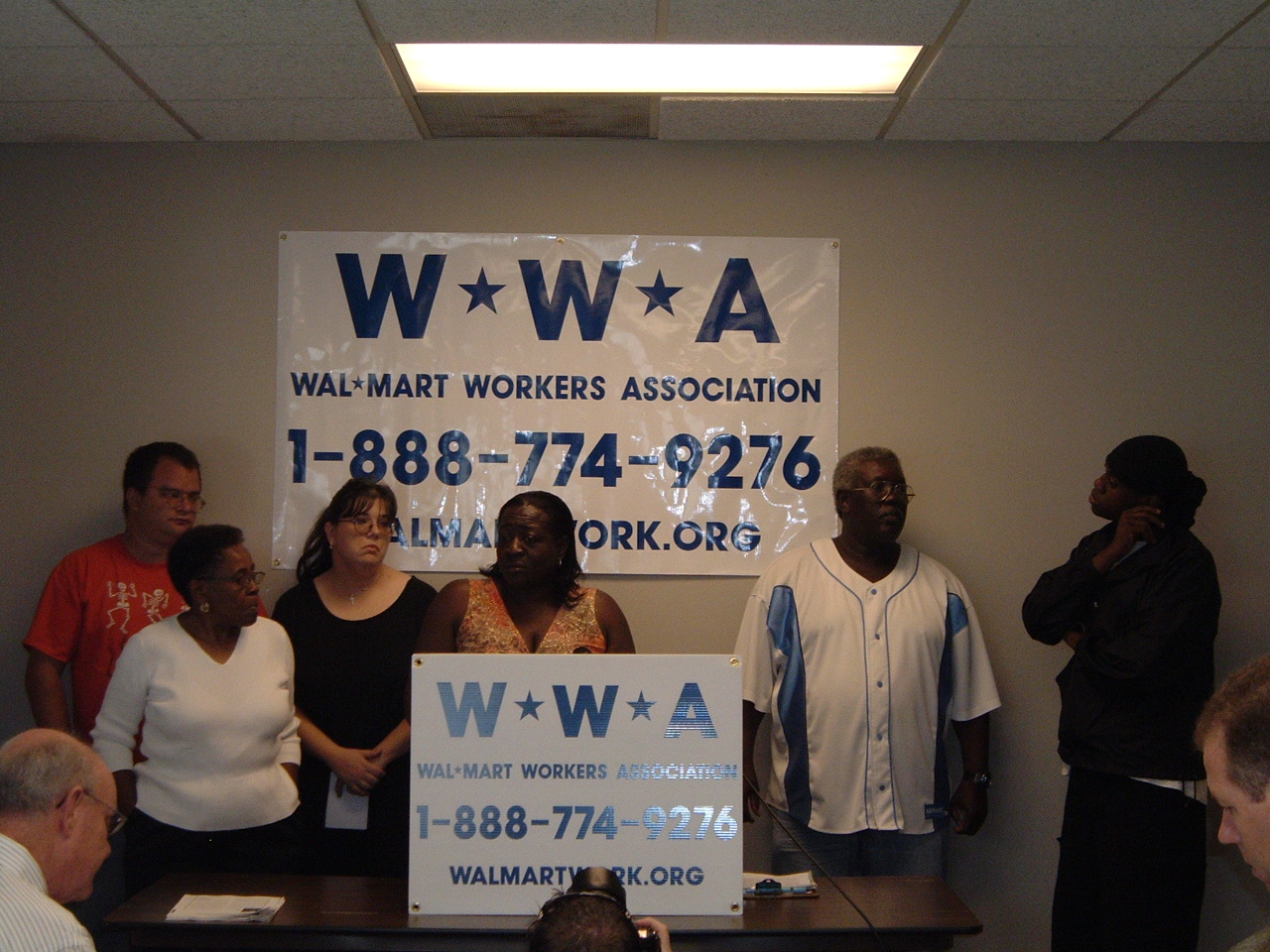