Baton Rouge    In Baton Rouge there have been no vacancies since Katrina blew through. In New Orleans where there are few people and neighborhoods just opening up with people returning, one can feel the same squeeze developing.

If you wanted to rebuild your house and had a FEMA trailer, you could presumably hook it on the street, just as thousands of construction crews to on job sites all over the country and the world. You could make do and live “on the street,” while you worked your house into shape or worried with it being rebuilt from the ground, if you had the resources and wherewithal. But, you can”t get a FEMA trailer, and you can”t get one where you need them in New Orleans.

FEMA now claims to be delivering 1000 trailers a week. Mayor Ray using god knows what misinformation, claims that there are 60-70,000 residents of the City of New Orleans now on a 24-hour basis. More than 400,000 and change are still on the lam and looking then. The math does not favor the families. Arch-Republican, who do not even live in New Orleans, but are on Mayor Ray”s “advisory” committee, like Boysie Bollinger, have been quoted complaining that they can not get sufficient trailers to house employees as they try and get their businesses, and in his case a shipyard, back up and running.

The Governor executed an order in the wake of the hurricane to prevent evictions. That was probably a good idea in a city and state where tenants have virtually no protection.

But, in a city and state with virtually no legal protection for tenants, where there is now virtually no operating court or legal system, and where the tenants had to evacuate, just like the homeowners, this order is mainly enforced in the breach. First, you would have needed a lease to escape eviction, and many tenants are on a month-to-month situation. Secondly, where tenants had leases, these were not “tenant-friendly.” Thirdly, the landlords can “claim” just about anything to move you on down the road, while they open up the apartment to the new realities of high, Manhattan, pricing, and reap whatever rents they can.

The stories are endless. In the paper a tenant relates with a straight face being evicted — and understanding it — when the landlord says he needs the unit for family members who are now displaced and homeless. Maybe? The son of one of the Local 100 organizers got a call that he and his family could not return to their apartment in Metairie, just outside of the city in an area largely unharmed, because the apartment was now “unfit.” Within a week he heard that the formerly “unfit” apartment had been rented for twice what he paid — $1000 — to a new tenant.

The classifieds also tell the new story of housing scarcity. Rents that would have seemed absurdly priced at unheard of levels of $1000 to $2000 for one and two bedroom apartments are now commonplace. A place in the Bywater at $850 suddenly looks like a bargain worth snapping up quickly, where 2 months ago it might have meant the French Quarter with River views.

To get a job you have to have a place to live. For workers and residents to return there has to be decent housing. The best housing would be affordable. Perhaps there is a new wage reality that makes these rents possible, but the huge levels of unemployment that one still hears about everywhere around the City would still seem to contradict some of these claims.

No solution to these housing crises could suffocate the City, even if there was a real plan to rebuild and recover, which unfortunately there still is not. 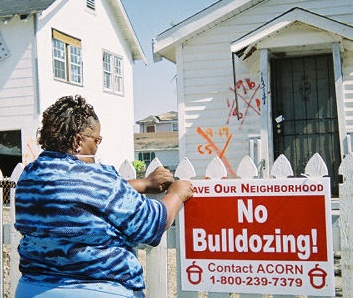